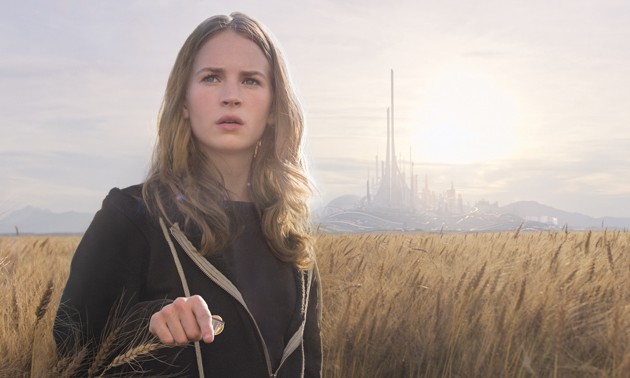 June 11, 2015
Disney Dreams: George Clooney goes back to the future

Walt Disney always wanted his parks to be “magical.” Here’s a movie that takes that idea and really runs with it. Actually, Tomorrowland takes that idea and flies with it—with rocket packs, no less—into the teeming, gleaming futurama of Uncle Walt’s dreams more than half a century ago when he opened the gates to Disneyland.

In Tomorrowland, George Clooney plays the modern-day, grownup version of a bright young lad, Frank, who lugs along his homemade jetpack to a science-fair competition at the 1964 World’s Fair—where Disney unveiled four major attractions. Frank and his contraption are rejected, alas, but he gets a special invitation to hop aboard Disney’s new ride It’s a Small World, which turns out to be much more than just a poky boat cruise through an international chorus of singing animatronic children: It’s a secret portal to the future!

Frank has a glorious time in the splendid world-yet-to-come, a fabulous sky-tropolis called Tomorrowland. But he can’t stay there forever. We eventually find out why he must leave, and why, decades later, he’s compelled to return.

Director Brad Bird, who’s shown his skill in both animation and live action with The Iron Giant (1999), The Incredibles (2004), Ratatouille (2007) and Mission: Impossible—Ghost Protocol (2011), mixes brisk, old-school adventure and a spirit of boundless idealism onto a palette of gorgeous, eye-popping visuals. The script, which he co-wrote with Damen Lindelof (Lost, Prometheus, World War Z, Cowboys and Aliens) and Jeff Jensen, crackles and pops mystery and suspense, wit and whimsy, and deeper, more passionate themes about science, technology and ecology.

Britt Robertson—recently seen saddling up in The Longest Ride—plays Casey, the spunky teenage daughter of a NASA scientist (country singer Tim McGraw) “chosen” for her own trip to Tomorrowland. British actress Raffey Cassedy is Athena, a mysterious young girl who connects both Frank and Cassidy across time. Hugh Laurie plays Tomorrowland’s top dog, who turns out to have quite a bite. Keegan-Michael Key from Key and Peel and Kathryn Hahn, who stars in Showtime’s Happyish, have a Men in Black-ish scene as a couple of space-oddity souvenir-shop owners.

The movie doesn’t note it, but Disney fans will certainly be aware that Tomorrowland was one of the five original “lands” of Disneyland, opening in 1955 to give visitors an imaginative taste of the future and outer space. Its silent “background” presence in the film deepens the movie’s make-believe mystery about just how forward thinking the House of Mouse might have really been.

There’s quite a lot happening, sometimes almost too much, and the cartoonish violence—aliens blasting people away, humanoid robots being bashed and decapitated—may unsettle some little ones. Plot points become muddled in the rush to keep moving, and the movie’s message gets a bit preachy.

But, like Frank says at one point, “Can’t you just be amazed?” Any movie that can get young people thinking about the future—the future of the planet, their future, our future—and about not giving up, even in the face of doom and gloom, is pretty amazing in itself. Maybe it really is a small, small world, after all. And now I’m super- curious about the secret purpose of Mr. Toad’s Wild Ride.