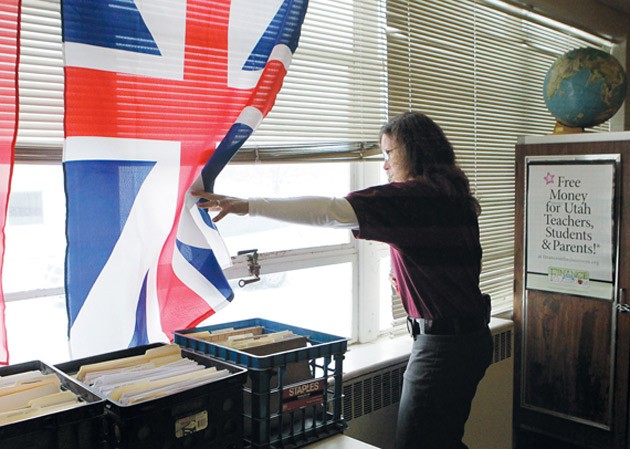 Dugway High School Principal Robin Nielson pulls back the United Kingdom’s flag from a wall of single pane windows in the building Wednesday afternoon. The high school will be rebuilt, and the school district will contribute $2.9 million toward the cost.

Cash-strapped Tooele County School District has found a way to rebuild a 54-year-old high school — with a little help from the U.S. military.

The Tooele County School Board voted Tuesday to accept a U.S. Department of Defense offer to pay 80 percent of the cost to build a new high school at Dugway Proving Ground’s English Village.

“This is something that is needed, but there is no way we could build a school at Dugway without this match,” said Terry Linares, Tooele County School District superintendent.

The new building project comes after a 9.1 percent property tax hike by the school district to balance its 2013 budget. Despite budgetary problems the district was able to find $2.9 million for its share of the new Dugway building.

District funds to help pay for the new construction will come from a combination of unanticipated income restricted to capital expenses, in-kind contributions, the delay of other capital projects and expenses already included in the annual budget, according to Linares.

Capital outlay funds used for the building will include a $561,000 check the district just received on its claim for the Grantsville Elementary School fire; $161,000 that Tooele City recently paid the district for roadwork involved in the construction of the Community Learning Center; $425,000 already budgeted for technology for Dugway High School; and $147,000 that was budgeted for a remodel of Dugway’s locker rooms.

The district will also defer asphalt and roof work on existing buildings for one year.

New revenue that will be put towards the $2.9 million include the first two years of payments from three economic development projects. The three projects are the Reckitt Benckiser distribution center, Allegheny Technology’s titanium plant, and the Stansbury Crossing Project that houses Soelberg’s Market.

Linares estimated that the three projects will generate about $300,000 a year for the district over the next two years.

The DOD will also allow the district to include $300,000 of salaries for district staff that will spend time working on the project, and $100,000 for Dugway Proving Ground’s donation to allow debris from the demolished school to be placed at its disposal site.

DOD officials have suggested adding an auditorium to the new building’s design to increase parity with other high schools and to fill a community need.

The auditorium would add an additional $2 million to the cost, which will raise the district’s share of the new building by $350,000.

The school board voted to go along with the auditorium if it can get an additional $400,000 of in-kind contributions from Dugway Proving Ground for demolition work and improvements to the baseball field.

The DOD funding for the building is a result of a project that was started by the military. Two and a half years ago, DOD conducted a survey of the condition of school buildings on military installations across the country.

DOD then prioritized the needs of each building and developed a rank order listing of buildings to be funded as money became available. It next started to fund the top 12 buildings on the list.

In January 2012, the Tooele County School District was informed that the DOD had enough funding to go forward with the next 12 buildings on the list, including Dugway High School.

The DOD requirements for matching funds require that the new building be built with at least the same square-footage, and have facilities comparable to other school buildings.

The building concept included a cafetorium with a stage and kitchen, a commons area for students, offices for counselors, and rooms for special education. These facilities, which are present in most high schools, are not included in the present Dugway High School building, Linares said.

The new building will have a capacity of 300 students, the same as the current building.

Dugway High School’s current enrollment is 82 students. Once the building is completed, the district is considering moving Dugway’s 129 elementary students into the high school building, creating one K-12 building for Dugway.

Linares estimated combining both schools will save the district nearly $300,000 a year in salaries and utility expenses.

“When the building is all done, we will have a new building without incurring additional debt or increasing taxes,” said Linares. “Both buildings at Dugway are old and in need of repair. The estimate we received to remodel just the high school to bring it up to current safety codes, and to make it American with Disabilities Act compliant, was $22 million.”