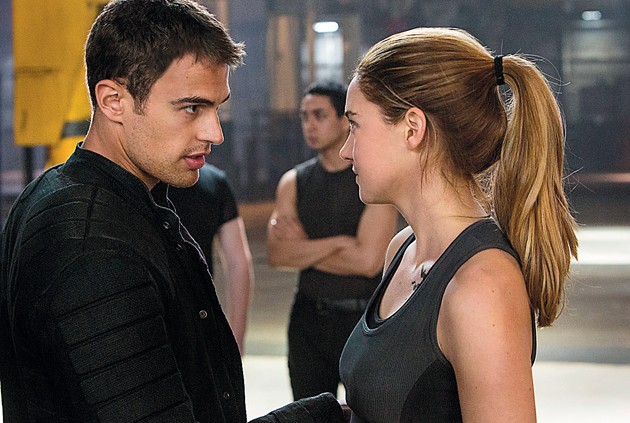 No matter how much I like movies, my love of books seems to come first.

This is why I usually cringe when I hear about a book being made into a movie. They’re just not the same, and the book is almost always better.

With “Divergent,” the cinematic view of Veronica Roth’s dystopian future meets, and in many ways exceeds, the world on the page.

For those not familiar with the popular teen trilogy, people in post-war Chicago have divided themselves among factions based on personality type — erudite, for the scholarly and logical; abnegation, for the selfless; candor, for the blatantly honest; dauntless, for the fearless and protective; and amenity, for the peaceful and giving. At 16, teens must choose among the factions, which they will then join for life, regardless of the faction they were born into.

Beatrice Pryor (Shailene Woodley) and her brother, Caleb (Ansel Elgort), are teens in the abnegation faction. Just before the choosing ceremony, they take a test to determine where their personality fits among the factions. Beatrice’s test results are inconclusive — a practically unheard of phenomenon — meaning she is divergent and does not fit neatly within any of the factions. She is urged to keep her results secret, because divergents are seen as a threat to the current system of government and are thus killed.

On choosing day, Beatrice chooses to go into the dauntless faction, while her brother chooses erudite, and is swept away from her mother and father (Ashley Judd and Tony Goldwyn) in a rush of daredevil stunts. Now dubbed Tris, her personality and abilities do not initially make her a strong candidate for becoming a dauntless, but her divergent nature soon helps her streak meteorically to the top — too fast, warns her teacher, Four (Theo James). Meanwhile, Tris and Four discover a plot by one of the factions to overthrow another, and must dodge the watchful eyes of the divergent-hating Jeanine (Kate Winslet) to try to stop it.

It’s a fairly complicated system with a set of unfamiliar rules, but the movie does a good job of explaining them for the uninitiated, and even mostly within the context of the plot (OK, there is one brief info-dump in the beginning). The film is a little on the long side, but its pacing is steady enough that you don’t feel like you’ve been sitting in your seat for more than two hours.

I’m going to be honest: I was not the biggest fan of “Divergent” when I read the book. It’s often lumped together with other dystopian teen series like “The Hunger Games” and “The Maze Runner,” both of which I found more compelling and tightly crafted than “Divergent.” I mean, I didn’t hate it; I just wasn’t crazy about it. My biggest beef was that the great peril against, not only the protagonist but the entire world, felt suddenly introduced, like Roth decided late into the novel that a futuristic coming-of-age story wasn’t enough.

In that respect, the film is kind of like a final edit, another layer of polish. In the movie, there are breadcrumbs dropped for viewers, increasing the suspense and raising the stakes. It almost seemed like the book got one final edit, a little more polish, in its transformation to the big screen. Besides that, it keeps pretty faithful to its source material.

Of course, there were some things left out. I was really rooting for Will (Ben Lloyd-Hughes) and Christina (Zoe Kravitz), but theirs was a love that, sigh, never really bloomed. The conflict with Molly (Amy Newbold), Peter (Miles Teller) and Al (Christian Madsen) was kind of pushed to the side. Tori (Maggie Q) wasn’t in it nearly as much as I would have liked. But these are small quibbles.

Those aside, I was really impressed with “Divergent.” It does a great job of pleasing die-hard fans with its accuracy but is accessible to people who have never heard of the series. This is one of the rare times that I can say I felt like the movie was as good as — or maybe even a little better than —  the book.