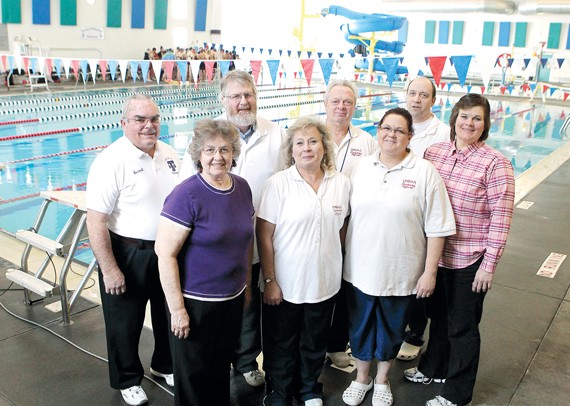 Mel Roberts, Tooele High School’s swim coach, has said that the school’s swim meets are some of the best operated in the state and the country, but he’s not the only one.

Roberts said he’s been told this by other coaches at clinics and conferences. These coaches from around the nation have taken an interest in how the school is able to work efficiently while creating a positive and fun experience for the swimmers and fans.

“Many of the coaches I have the opportunity to meet with and talk to at clinics and conferences around the nation are interested in how we are able to have so many people willing to help with our meets and conduct them so efficiently,” Roberts said. “We are very fortunate to have parents and townspeople who are willing to donate their time and talent for our swimmers. They are always in demand for the state meets for all classifications.”

The people who make the THS swim meets operate smoothly range from Roberts’ wife to parents of former swimmers and even an individual who has never had a swimmer on the team but is always willing to help out.

“Their presence and help take a lot of stress off the coach before and during the meet,” Roberts said.

Russell Rimington is a former THS swimmer and teammate of Roberts. He has been announcing the school’s swim meets since 1983. He graduated in 1961, just one year ahead of Roberts, when he, his brother and Roberts swam for Leigh Pratt at the Tooele Memorial Pool, which was replaced by the Pratt Aquatic Center.

Rimington’s job consists of informing swimmers and spectators of what races are taking place and making sure the swimmers report to the starting line. He announces the winners of the races and if any records were broken during those races.

Coming to the meets and being the announcer is rewarding for him because he loves the overall demeanor of the THS swimmers.

“They’re good kids,” Rimington said. “They’ve got goals in life. I love their energy. It makes me feel young again.”

Roberts’ late father Andy was the announcer before Rimington, up until he and his wife left on a mission for the Church of Jesus Christ of Latter-day Saints. Roberts then asked Rimington to come be the announcer of the meets in ‘83 when Rimington had children competing on the THS swim team. Rimington happily accepted the offer and has been the voice at swim meets ever since.

“You get chlorine in your blood and you want to come back,” Rimington said.

Roberts’ wife, Gwen, has taken an active approach in supporting her husband’s program by being involved with the swimmers during meets. She receives all entries, places swimmers in heats and lanes, makes sure the meet is ready to start on time, operates the meet program on the computer, compiles the results after each race and gets them to Rimington. After the meet she checks over the results to make sure they are correct and gets them to the coaches.

Gwen started volunteering at THS swim meets in 1987. All of her children were on the swim team, and she now has two grandchildren, Duncan Holt and Jack McEachern, on the team. But she said her husband and grandkids aren’t her only reasons for helping out. She likes helping all the kids just for the sake of the team.

Dean Aldous volunteers as a time keeper for the meets, but he’s never had a child compete on the swim team. He and his wife started volunteering at the meets 10 years ago, and although his wife no longer comes out, he still comes to time the meets.

Aldous said he loves the energy of the kids.

Staci Smith, the mother of THS swimmer Quinten Smith and daughter of Rimington, said her whole family is a family of swimmers so it’s in their blood to help out with the swim meets.

“I like it when we’re all timers,” she said. “We can all help out each other.”

Smith still has extended family in the program who are freshmen, so she knows she’ll be around to help out for a few more years. As for after that?

“I think Mel still wants me to,” she said.

Dennis Andrews can be considered the do-it-all referee at the swim meets. As the head official, he makes sure there are enough officials at the meets, and then before the season he makes sure those officials are certified. If there are enough officials at the meet, then Andrews becomes the team photographer and videographer. At the end of each season, he puts together a video to show at the end-of-year awards banquet.

He and his wife Karen have volunteered at THS swim meets for the last 18 years, and all of their children have swam for Mel in that time. Even with their kids graduated, Andrews and his wife still make a point of helping the team because of what it does to build young people.

“They learn discipline and working through hard times,” he said. “They come out a better person. That attitude carries on.”

He attributes all of his children’s successes to the fact that they swam for THS. He said he and Karen will continue to volunteer as long as they can.

Others have also said the experience is rewarding and fun.

Janet Chevalier, a volunteer referee and mother of THS swimmer Beth Anne Chevalier, said she loves associating with the swimmers.

Yvonne Philpot, another volunteer referee, said she and her husband David continue volunteering even though they haven’t had kids in the program for three years. They simply love it.

“It’s a lot of fun,” said Tom Johnson, volunteer referee and father of THS swimmer Brandon Johnson. “It tells you a lot about Coach Roberts and the program. People don’t have to be here, but they come anyway.”