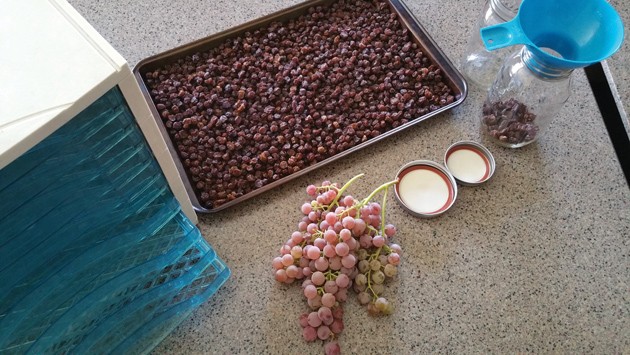 Drying fruit, including grapes, can be easily done at home.

A great restaurant opened by our northwest Tucson home several years back. It was a cheery place; great food, really nice owners, and they served wonderful breakfasts. I can still taste the home fries that were part of the two-egg breakfast I’d order whenever we went there.

The name of the place was Dolce Vita — an Italian phrase simply meaning, “the sweet life.” It had a nice ring to it, and an even better meaning — that a good meal, among friendly people and your loved ones, is one of the best pleasures in life.

The idea of sweetness shows up many times in language around the world. We’ve heard terms and phrases such as “sugarcoating” something otherwise unpleasant, Mary Poppins singing “a spoonful of sugar makes the medicine go down,” and even an exclamation when something is really good, “SWEEEET!” Plainly, to most folks, something sweet is highly desirable.

A bit of a confession here. I have a sweet tooth. No, it’s bigger than a single tooth! I enjoy pies, cake, brownies, doughnuts, sweet coffee and tea, ice cream and (gasp!) those darn snow cones that are so readily available around here during the summer months. But, enjoy them or not, such things are better enjoyed in moderation, both for health’s sake as well as enjoying something more that has a bit of scarcity to it. Heck, even German chocolate cake (another personal weakness), eaten every day, will soon taste like soap!

We have become so accustomed to having sugar readily available to us that we can believe that it’s always been that way. Not so. It’s hard to imagine life as it’s been for centuries — sweetness was much less common and depended almost entirely on honey with an assist from sweet fruits. Even brown sugar and molasses are more modern products.

There are only two crops that will most directly produce white table-type sugar — sugar cane and sugar beets. Sugar cane is native to Asia and thrives in hot/warm and humid places. It is historically a labor-intensive crop. As demand for sweetness grew and availability of sugar was demanded by the masses, this created large economic shifts as sugar cane plantations were started in many parts of the world. To grow and harvest this crop, it unfortunately required either slaves, cheap labor, or indentured servants. Fortunately, the industry ultimately stabilized, was legitimized and became a trade that benefited by innovations and labor-saving practices.

The other crop that sugar can be readily produced from is sugar beets. I remember many farmers growing these beets in southeast Arizona. Sugar beets will grow in settings other than the tropics, and can be adapted for a wide range of climatic conditions. The sugar beet is used heavily in Europe for sugar production. Some of the earliest commercial endeavors, both in cultivation and processing, were in the cooler climate of Prussia (a German kingdom between 1701 and 1918 that included portions of present-day Germany, Poland, Russia, Lithuania, Denmark, Belgium and the Czech Republic — how’s that for a history lesson?).

It’s difficult to distinguish from fully-processed beet or cane sugar. They look and taste essentially the same. There are diagnostic tests that will readily reveal the sugar’s source, but for us plain old sugar consumers, either one works well for our culinary needs. The sugar beet has grown in popularity not only because it can be grown in a wider range of areas, but it takes about one-fourth the amount of water to cultivate it compared to sugar cane. A quick clue of which type of sugar you are buying is on the label itself. Cane sugar producers tend to label the product “pure cane sugar” while beet sugar is usually labeled just “sugar” or “white sugar.”

Sugar is a highly-regulated commodity by many countries, including ours. Tariffs are imposed with imported sugars, and domestic production levels are set to assure profitability by growers and producers in the sugar industry. At the same time, corn production is subsidized — farmers are paid to grow it. So, white sugar prices in the U.S. and Canada are about twice the level of the global price, but corn syrup is cheap. This is a complex issue that boggles the mind and is way above my pay grade!

Suffice it to say, U.S. sugar is expensive to producers of products that require a significant amount of sweetening. I suspect that this is the key reason for most candy manufacturers being elsewhere. Sugar also faces stiff competition from both artificial sweeteners, increasingly agave and stevia sweeteners, and the biggie, corn syrup.

High-fructose corn syrup (abbreviated “HFCS”) is now so commonplace that it’s hard to avoid it. Because HFCS is not price-regulated like regular sugar, it is much cheaper. HFCS is a modified corn syrup that is produced from the kernels of corn. The dried kernels are milled to produce cornstarch. This starch contains long chains of glucose. Water is mixed with the starch, and a bacterial enzyme is introduced. The starch now breaks down in short chains of glucose. Another fungus-produced enzyme is added. This breaks down glucose chains into individual glucose molecules. Voila! You now have corn syrup.

We’re not done yet, though. Corn syrup is not high-fructose corn syrup. To get that, you must turn some of the glucose molecules into fructose. This is done with yet another enzyme. There are two common types of HFCS, 42 and 55. 42 is less sweet than 55 and is most commonly used in foods and bakery goods. 55 is sweeter and is used mostly in soft drinks.

There are those that feel HFCS is inherently evil. I’m not one of those. It comes from a plant source and is processed, as is white sugar. As far as I’m concerned, any evil that comes from any form of sweetening is overuse of it and subsequent dependence on it.

Moderate to high amounts of sugary foods and beverages does have effects on the human body. There are interesting studies showing correlations between increase in obesity and occurrence of diabetes in developing countries where sugar-laden items, include “fruit” type drinks have become dietary mainstays.

It’s interesting to note that processed sugar did not become available to the average person until the 1800s! That’s right. What did we ever do? How did we survive?

Up to then, honey was highly desirable, having the same level of sugar content as table sugar. There’s a common misperception that bees “make” honey — secreting it from glands or saliva. Nope. Bees collect nectar from a variety of flowers, which is sucrose- and glucose-rich. The bees add enzymes and dehydrate the nectar, condensing into the thick and sweet substance we know as honey.

Another source of sweetness that our ancestors enjoyed was fruits. Since they didn’t have refrigeration and canning was a fairly recent invention, fruit had to be eaten fresh when it was in season, or made into ciders and fermented to stabilize it for storage at room temperature, or dried.

Drying is still a popular and available method of fruit storage. One of our favorites is making raisins from sweet red grapes. Because the sugar of the grape is now condensed into a smaller amount of food, it’s hard to believe the raisins don’t contain added sugar. We also dry apples from our orchard. One version is simply dried after dipping into lemon juice. The sweeter the apple to begin with, the better. The second version, made in smaller batches, is dried with cinnamon and a dusting of table sugar. This tastes pretty much like an apple pie! Yes, I see the irony in that we are using a historical method for food preservation and then adding sugar. My conscience is clear in that we do this in small batches and as a special treat.

Lastly, as canning became more available, much of the sweetness that the pioneers enjoyed came from preserves, jellies, fruit butters and compotes. All of these were made with varying degrees of added sweetness, depending on what was available. But for the most part, there was heavier dependence on the natural sugar in the fruit.

And who doesn’t have some memory, either directly or from a relative, of fruit being given as a special treat on Christmas morning? I know that for Maggie’s mother, when she was growing up, an orange was a sweet treasured gift on Christmas.

With all that we have available to us in today’s world, sometimes the simplest things can be the most treasured. Dolce Vita…