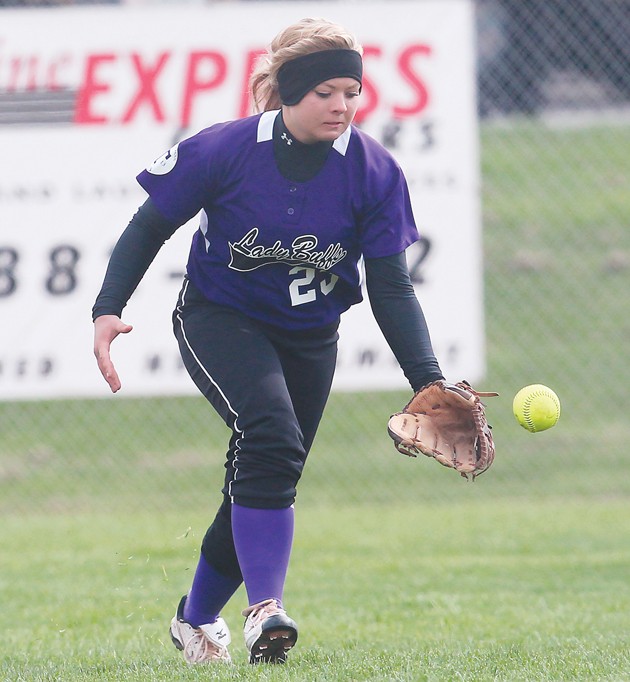 Tooele High School’s Sierrah Anderson scoops a base hit in the outfield Tuesday against Stansbury. Anderson is among several freshmen on the roster who make significant contributions to this year’s Lady Buffs.

The phrase “rebuilding season” doesn’t really do justice to what the Tooele Lady Buffaloes have gone through this year in softball, but with a varsity roster filled with nine freshmen and sophomores (six of whom are starters), that’s really the only phrase that can be used.

Remarkably, the Lady Buffs have hung in there through their first five Region 11 games this season and find themselves sitting in fourth place as owners of the final playoff spot. With seven region games left on the schedule, including a rivalry game with Grantsville on Thursday and their second game with Ogden on Friday, the Lady Buffs control their own postseason destiny.

“Like I’ve said all season long, we have a group of kids that are fighters,” Tooele coach Melanie Nelson said. “They’re young, and they’re learning every game.”

Nelson said she’s trying to help this young team focus on one concept at a time, and right now the focus is defense. She said defense has been a problem, but in the game against Stansbury, the team finally showed that the defense has improved. The Lady Buffs committed no errors against the Lady Stallions, and those small victories are what Nelson hopes to build the team.

“Defense has just been killing us,” Nelson said. “We have been beating ourselves most games, and they came out today and proved that they can play defense.”

The next step is to build up the team’s pitching. Junior pitcher Lauren Frailey pitched in just her second game of the season against Stansbury, as she’s been battling injuries. Frailey threw four wild pitches against Stansbury that led directly to runs, but Nelson said she knows Frailey still needs time to adjust back into pitching mode.

Even through the challenges, Tooele can still make a run at the state tournament, which Nelson said is all she can hope to have. She said just making sure these girls get a chance to play at state would be a big victory. First, they have to take care of business during a week slated with several games.

“This is a good week,” Nelson said. “We have a lot of games, and more so it’s a good chance for our pitchers. It was Lauren’s second game out, and there are cobwebs. That’s just how it is, and we have to be able to make adjustments, and she’s got to keep her head up.”

Things are far from the dynasty that played for a state championship all those years in a row, but even with just two wins on the season, those two wins were the ones that mattered. Right now, the Lady Buffs sit one game ahead of Morgan in the loss column for the fourth and final playoff spot, and in reality they really only have to beat the teams below them to get to the playoffs.