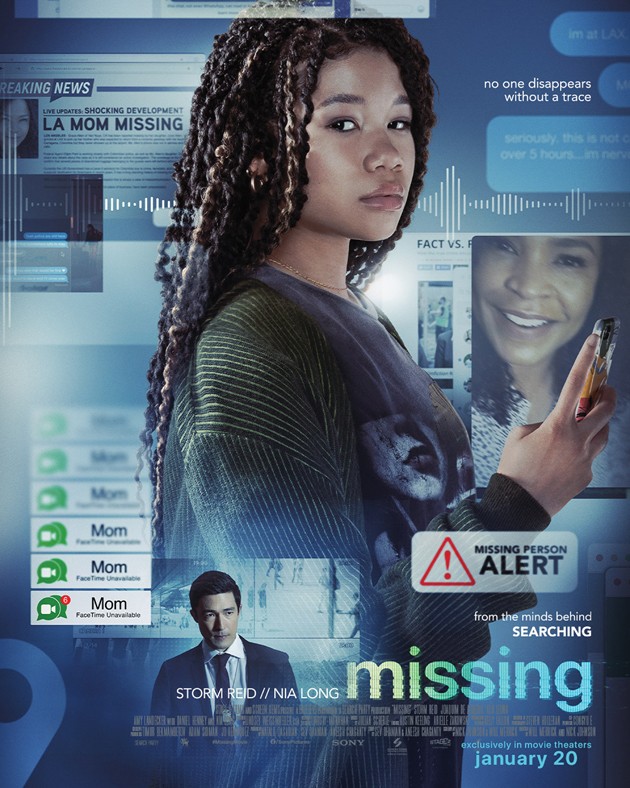 Ever have the feeling that someone is tracking your every move? Well if you get lost, you might wish that was the case.

In the movie Missing, an 18-year-old daughter named June Allen finds herself playing the role of detective and internet sleuth after her mother does not return home from vacation.

At the onset of the film, June’s mother Grace takes a trip to Columbia with her boyfriend Kevin. June takes advantage of an empty house and throws house parties galore with her friends. After sobering up and heading to the airport, she discovers both her mother and boyfriend are no shows.

Upon contacting the couple’s hotel in Columbia, and learning that they never checked out, June comes to realize that her mother is missing. Even worse, she learns the two have been abducted by masked individuals.

Using every bit of technology at her disposal, June tracks down as many bread crumbs of evidence of her mother’s last whereabouts. From FaceTime to geolocation, to internet deep/diving and email hacking — it wouldn’t be a shocker if Google and Apple sponsored the movie with their products being prominent throughout.

Over the course of her quest, it is revealed that Grace’s boyfriend Kevin is not who everyone thought he was. After uncovering his history as a conman, June starts digging into his past.  What occurs next is a wave of frenetic searches and plot twist after plot twist.

Not only is Kevin’s past dark, June also finds out that her mother has her own shady secrets. The movie is full of spoiler landmines, but the gist of the storyline is that no one can be trusted or apparently fall off the grid.

At its core, Missing is a story about how interconnected we are as a society, and showcases the lengths to which a child will go to connect with their parent(s). The premise, which sounded like an inverted version of the action movie Taken, actually turned out to be a good movie — without the fight scenes.

On that note, an issue I took with the film’s approach was the lack of real-time action. It isn’t until the last 30-40 minutes that any scenes took place from a perspective other than a third-person grainy video screen. The constant online video took away from the intensity and, at times, led to a disconnect over how much danger the characters actually faced.

One of the movie’s major flaws is the presentation — which is through the prism of social media and the various technologies June employs. As innovative as it may be, there are moments where the plot’s transitions are blurred, which results in the audience being taken from one computer screen to the next without any context of the passage of time.

Overall, Missing is worth the watch. Whether you wait for it to stream online, or make the trip to the theater, there are enough moments of suspense and compelling characters to keep you engaged and entertained.

The movie, which is rated PG-13, is currently playing at Tooele’s UEC theater, with the next showings starting Monday afternoon and running throughout the week.