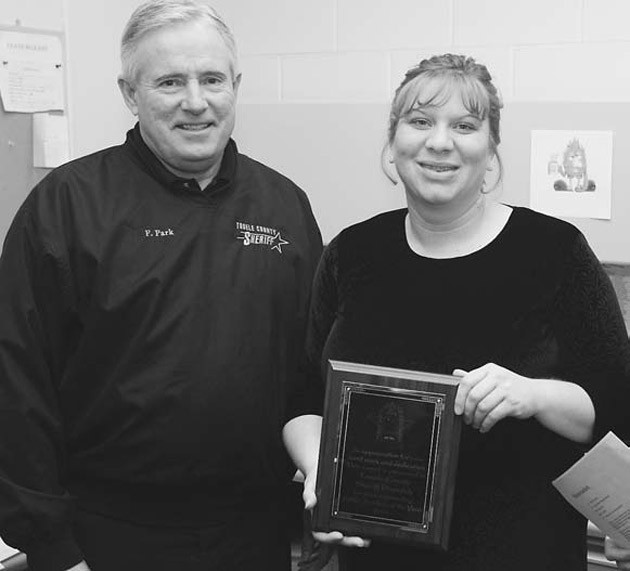 Tooele County Sheriff Frank Park and dispatcher Jackie Power were honored last week with Utah’s “Dispatcher of the Year” awards from the Association of Public Safety Communications Officials. The awards were presented in recognition of how the dispatchers handled a doubleshooting in Grantsville and Delle last June. photography/Troy Boman

Tooele County Sheriff Frank Park and dispatcher Jackie Power were presented with Utah’s “Dispatcher of the Year” awards last week for the way they and others handled a shooting incident last summer.

The awards came from the Association of Public Safety Communications Officials (APCO).

June 9, 2004 was a horrifying night for two Tooele County residents as well as local law enforcement agencies and dispatchers employed by the Tooele County Sheriff’s department.

At 7:30 p.m. that evening, Richard Hesper Wilson, 40, a man from Walla Walla, Wash., made a stop at AA Hometown Laundry in Grantsville. After robbing the establishment of $50, Wilson, who had an extensive and violent criminal history, shot a laundromat employee, 17- year-old Kimberli Lingard.

As Lingard, who was listed in critical condition by local EMTs, was being placed on a medical helicopter for transport to a Salt Lake City, Wilson was driving westbound on Interstate 80. Fifty miles from Grantsville, Wilson stopped at the Skull Valley Station in Delle.

Again, after robbing the establishment, Wilson shot Dee Jensen who along with her husband Jerry owned the Skull Valley Station. Tooele County dispatchers received news of the second shooting at approximately 9:30 p.m. June 9.

Jackie Power and Crystal Hillyard, Tooele County dispatchers, were on duty the night the telephone calls started pouring in concerning the shootings.

Although Lingard, a teen who lives in Stansbury Park and who will graduate this spring from Grantsville High School, was unconscious following the shooting, Jensen was able to call 911 on her own.

Power remained on the telephone line with those who called about the Grantsville shooting while Hillyard notified Grantsville Police as well as law enforcement officials throughout the county that help was needed at the laundromat.

Two hours later when Jensen called 911 and whispered into the phone that she had been shot, Power asked if there was anyone there to help her. About that time a truck driver from Tennessee, who frequently stopped at the Delle station, walked through the door. When Dee told the trucker she had been shot, he ran outside to look for the assailant. Seeing no one around the gas station and convenience store, the trucker went back inside and took the telephone from Dee’s hands.

Powers was calm as she asked the trucker to find something to apply pressure to Dee’s gunshot wound. The bullet from Wilson’s gun had gone through the 59- year-old woman’s back near her shoulder and exited from her neck. The trucker grabbed a half-empty roll of paper towels, twisted them into a U-shape, then used it to apply pressure to Dee’s wounds.

Local EMTs helped stabilize Dee after Hillyard dispatched them to Delle. Jensen was then also transported via medical helicopter to a Salt Lake City hospital.

Law enforcement officials and medical doctors say it was “miraculous” that both Lingard and Jensen survived Wilson’s shootings.

On the night of the Grantsville and Delle shootings, Wilson, who had killed a teen girl in Idaho the day before coming to Tooele County, was soon spotted on I-80 about 15 miles from Wendover. UHP troopers recognized his vehicle due to the description provided by Jensen.

When Wilson speeded up after troopers activated the overhead lights on their vehicles, spikes were placed on the interstate by troopers. When Wilson ran over the spikes, the tires on his vehicle slowly deflated. Just east of the Wendover, Wilson pulled his car into the median and stopped. As he exited the vehicle he threw the stolen money from the two businesses into the air. A strong wind blowing that night quickly scattered the money among the desert’s sagebrush and salt flats.

Before police could approach Wilson he made a call on his cell phone, then threw it over his shoulder. The killer then sat down, took off his socks and shoes, “crossed himself,” then put his gun to his head and pulled the trigger. Wilson was pronounced dead a couple of minutes later.

During last week’s APCO award presentation, Jensen told those in attendance how much she appreciated Tooele County Sheriff’s dispatchers on the night she was shot. Jensen said that hearing dispatcher Jackie Power’s voice when she called 911 helped her to calm down.

Jensen also thanked all EMTs, medical specialists, and all law enforcement officials who helped her and Lingard on the night the two were shot.

Earlier this year, Power received an award from the Public Dispatchers Association of Utah. That award was also presented because of the way she handled the June 9 shootings.