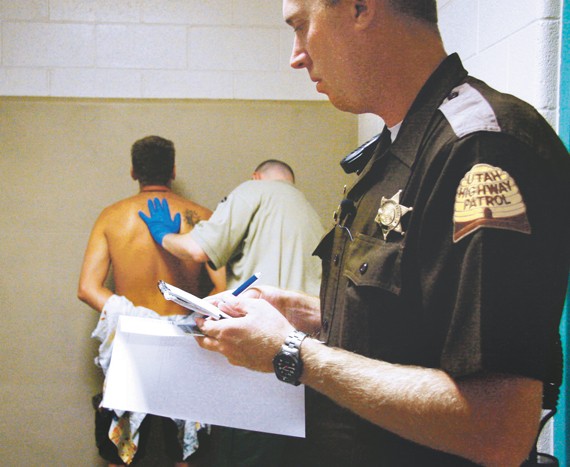 Hogan: Felony DUIs growing at a faster rate than all other types of cases ♦

The number of DUI arrests in Tooele County dropped slightly for the second straight year — bucking a statewide trend — but longer-term data shows the problem of driving intoxicated isn’t diminishing much and remains worse locally than elsewhere across the state.

According to a report issued by the Utah Commission on Criminal and Juvenile Justice, 14,658 DUI arrests were made in Utah during 2007. Of those, 452 occurred in Tooele County. Although that number reflects a 2 percent decrease from the previous year, a look back at the past five years reveals total DUI arrests in the county haven’t gone down by much.

Tooele County has a higher number of DUIs per capita than the state as a whole. In 2007, the county had 831 DUIs per 100,000 people versus the state’s 560. Even Box Elder County — which is similar to Tooele County in land area, population and number of vehicle miles traveled annually — had less than half of what Tooele County recorded on a per capita basis.

That raises the question of why driving intoxicated remains such a problem here despite years’ worth of anti-drunk driving messages.

“I think there has been a shift in the type of cases we handle in general,” Hogan said. “If you go back three or more years ago, it seemed like there was a lot more meth production cases. We don’t have very many of those cases right now. I think that’s due to enforcement and tighter restrictions put in place on the chemicals needed to produce those drugs. Those have been replaced with felony DUIs.”

Hogan attributes the increase to more and more reoffenders who have now tallied three strikes against them within a 10-year period, making their third offense a felony and all subsequent offenses felonies also.

Hogan said geography and I-80 play a role in the disproportionate number of drunk driving cases in the county. “We get the cases of everyone along the Wasatch Front who wants to party in Wendover,” Hogan said. “I think that’s what skews the number of cases we get compared to other counties.” But there are a lot of drunk drivers who never get caught, Hogan said.

“If you actually had the [officers] to throw at it, I bet we’d have another 100 DUIs annually,” Hogan said, adding that statistics say a person caught driving drunk has driven in the same condition 85 times previously and not gotten caught. “There are a lot that we aren’t catching.”

“People are in denial about their substance abuse problems,” Thomas said. “They may say, ‘I only drink on the weekends,’ or rationalize, ‘I’m not that drunk so I’m OK to drive’ or ‘I didn’t get caught before, so it’s OK.’”

Thomas said a growing misconception is that DUIs are always alcohol-related, when really more and more DUIs are connected to the abuse of prescription drugs.

“People have the misconception that if ‘I take two Tylenol it will help more’ and think the same about drugs like Lortab,” Thomas said. “Or people think ‘My doctor prescribed this so it’s OK.”

Tooele City Police Chief Ron Kirby backed up Thomas’ statement, saying that his officers have been seeing a real increase in the number of people driving under the influence of prescription drugs.

Tooele City now has an officer trained as a drug recognition expert on call to aid patrol officers when they suspect a driver is impaired but a breathalyzer test comes up negative. The drug recognition officer is certified to do blood draws to help identify what other substances may be in a driver’s bloodstream.

Kirby said even if a driver is under the legal limit of .08, an officer is still authorized by law to make an arrest.

“If the officer can show that the driver was impaired to the point it was unsafe, an arrest can be made,” Kirby said. “You may be at .07, but you may also be taking Tylenol PM. If you mix that with alcohol, you may very well be impaired. People can be affected differently by alcohol too.”

Hogan thinks current laws that dictate how much is too much when operating a motor vehicle create questions that are often tough for a drinker to answer.

“What doesn’t make any sense about DUIs is that we say there is a legal limit. It’s like saying ‘Go ahead and get a drink, but don’t drink too much,’ and then asking a person who is partially intoxicated if they are too impaired to drive. I think that’s insanity,” Hogan said. “The reason they drive home is because they aren’t in the position to make that decision. We could reduce our DUIs by just reducing the level to zero. If you had one drink, that’s too much, don’t drive.”

Tooele County Sheriff Frank Park said more public transportation options may help reduce DUIs in the county. He also felt bars and clubs have a moral obligation to help their customers get home safely. Tracks Brewing Company, one of Tooele’s few nightclubs, offers a shuttle service to transport customers home — for a minimal cost — if needed. Tracks is also in the process of introducing a new program to promote the role of designated drivers.

“DUIs are a terrible, terrible deal. No one wants that,” said Tracks owner Dayne Applegate. “We want to make sure everybody has a good, safe evening.”

The new program will serve to keep patrons informed of the downfalls of getting behind the wheel after drinking. Designated drivers will be provided a wristband that will enable them to drink a variety of non-alcoholic beverages free of charge throughout the evening.

“They are our hero for the night,” Applegate said. Hogan said driving drunk is one of the most costly offenses a person can commit. The cost of bailing out of jail, hiring an attorney, paying a fine, paying for court-ordered treatment and then dealing with a rate increase for automobile insurance for five to seven years following the arrest can add up quickly.

“When you add up all those things I think a person can expect a DUI to have a financial impact of approximately $10,000 or more,” Hogan said. And still, DUI offenders keep taking up more and more bench space in court.

“The solution is probably as complicated as the solution to the problem of alcohol and drug abuse in general,” Kirby said. “It’s an uphill battle for society.”