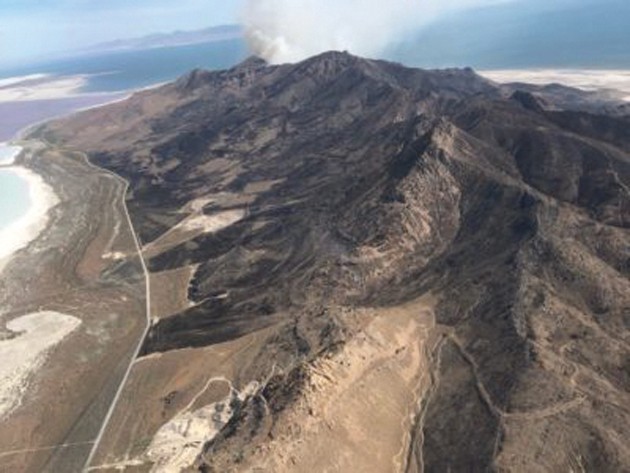 The Tabby Canyon Fire on Stansbury Island was started May 30, 2020 by an exploding target. It burned 6,849 acres before it was contained.

April flowers may bring May flowers, but Utah wildfire fighters are concerned that April fires may douse hopes for future flowers.

With an early April fire burning outside of Rowley in Tooele County, the Bureau of Land Management and the Utah Forestry, Fire, and State Lands are raising concerns of dry conditions and human caused fires.

Since mid-February 2021,13 human-caused fires have occurred, making up 100% of northern Utah’s wildfires in 2021, according to the two agencies.

“This year’s lack of precipitation in the West Desert and early increase in human-caused fires is concerning for wildfire officials, law enforcement, and land managers,” said Geoff Wallin, BLM West Desert District Fire Management Officer. “Vegetation is drying out very quickly after each precipitation event and becoming receptive to ignition only a couple of days later, resulting in high fire potential conditions.”

Dry conditions due to low precipitation this winter, increased public use, and mats of unburned fuel from last year are resulting in above-normal fire potential.

The 2020 fire season experienced a similar start with respect to precipitation and saw numerous early season ignitions and large fire growth as early as mid-April, according to state and federal wildfire fighters.

On March 17, 2021, Gov. Spencer Cox declared a state of emergency and issued an executive order due to the entire state being in moderate drought and 90% of the state experiencing extreme drought.

Eight of the 13 fires in Utah’s West Desert were caused by target shooting and five of the eight were determined to be caused by exploding targets. Possession or use of any kind of explosives, incendiary or chemical devices, pyrotechnics or fireworks, or exploding targets are prohibited year-round on all BLM-managed public lands.The human-caused cases are being pursued for criminal charges and/or cost recovery.

Tooele County has similar prohibitive laws for explosive targets that apply to state and federal public lands in the county.

To avoid wildfires, the public is encouraged to fully extinguish campfires and avoid building fires when winds are 15 mph or higher, choose a target shooting backstop free of rocks and dry grass – any bullet hitting rocks can create a spark, and avoid target shooting in during hot, dry, and windy conditions.

The public should check state and local websites to learn the laws and regulations about the use of fireworks, paper lanterns, exploding targets, and other incendiary devices —  these devices are prohibited year-round on BLM-managed lands. Seasonal Fire Prevention Orders and Fire Restrictions may come in effect when conditions warrant them.

The public should also avoid cutting, welding, or grinding of metal in areas of dry vegetation, check to make sure trailer chains are not dragging and are secure to prevent sparks, fully extinguish and properly dispose of cigarettes,avoid parking a hot vehicle over dry grass and maintain tires, wheels, and bearing on trailers to prevent mechanical failure.
Wild firefighters also remind public land visitors to be prepared with a shovel, water, and fire extinguisher. State-wide fire restrictions and prevention orders can be viewed at: https://utahfireinfo.gov/active-fire-restriction-documents/.

“We encourage the public to heed all fire prevention recommendations and orders,” said Brett Ostler, FFSL Fire Management Officer. “Last year, 154 of the 170 wildfires across all suppression agencies in northern Utah were human-caused; a grim statistic that we do not want to repeat.”