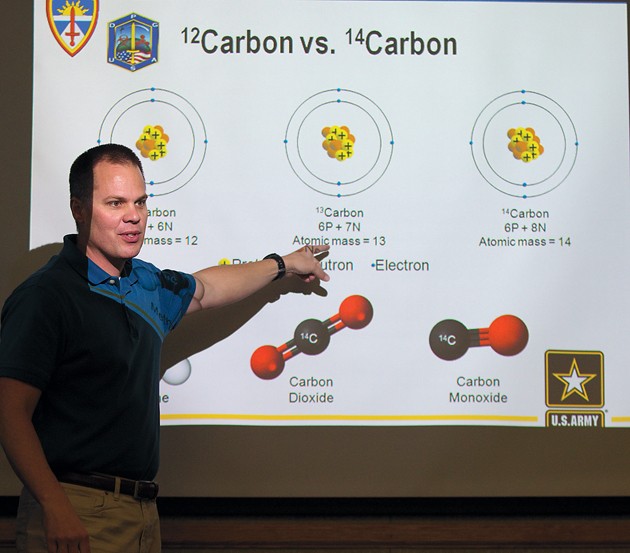 London Fog program manager Dave Blanchard talks about the difference between Carbon-12 and Carbon-14. Although both are naturally occuring, carbon 14 is radioactive.

A proposed project at Dugway Proving Ground involves releasing low amounts of radioactive gas to test equipment that may be used by the military or civilians.

If approved, the project, dubbed London Fog and in collaboration with the Department of Defense, releases a liter of Carbon-14 in a five-kilometer area in the south-central area of Dugway to test sensitive radiation detection equipment.

Carbon-14 is a naturally occurring radioactive gas that is produced when Nitrogen-14, which is high in the atmosphere, gains energy from solar radiation. In nature, it exists in the atmosphere at about one part per trillion. The Carbon-14 to be used in the proposed experiment would be artificially produced.

David Blanchard, project manager of London Fog, said Carbon-14 was chosen for the proposed tests because of its harmless nature, while still having a half life long enough to make it viable for testing.

“It exists in the atmosphere naturally and we wanted to use something with very low impact to the environment,” he said.

Additionally, he said, its relatively harmless nature makes it more attractive. If someone were to make a ray gun with Carbon-14, a person could protect himself from harm with a single sheet of aluminum foil. Furthermore, he said, the person wouldn’t need any protection if they were 22 centimeters (about 10 inches) away, because it would dissipate to harmless levels by then.

In the proposed project, a liter of Carbon-14 gas is released at the center of a 5-kilometer fan. Sensors around the area will attempt to detect the gas and its amounts, even in minute quantities.

“Ultimately, what we hope will come of this is something defenders and civilians can use,” Blanchard said. He noted the technology that may be tested could have been used to determine a more accurate evacuation zone near the Fukushima Daiichi nuclear plant in Japan that was damaged by a tsunami in 2011.

As the gas is released, radiation from the test at the epicenter is equivilent to the level a person would receive from a full-body CT scan, Blanchard said. On a scale where the radiation from a full-body CT scan is ranked at 1,000 and the average worldwide public dose of Carbon 14 is 350, the maximum estimated public exposure from each of the tests will be .0001, Blanchard said.

Additionally, he said, the area where the test is being held will, according to the installation’s meterological data, allows the gas the maximum distance for dispersal before reaching any inhabited area.

“We have the space to test this on Dugway and keep it on Dugway,” he said.

London Fog is still in the pre-approval stage. It must be presented at public hearings and its proposal available for public review for 30 days. Comments will be reviewed and incorporated into the modified proposal. That proposal is again displayed for public review before being sent through the approval process.

“It’s a fairly lengthy process and there are a lot of opportunities for people to review it,” he said. “We often find our greatest [critics] and greatest expectations are our own people because they hold us to such a high standard.”

Robinson, who has worked at Dugway for more than 20 years, said he has seen the culture of environmental concientiousness evolve through his tenure. Gone are the days, he said, when radioactive or hazardous material would be left in the open or improperly disposed of.

Blanchard said he agreed with the improvement in environmental safety on the installation. He said conditions are vastly different than they were during the infamous nerve gas tests that resulted in the Skull Valley sheep kill incident in 1968, in which more than 6,000 sheep were killed from exposure to agent.

“I think a lot of people view government as bad. Most of us here have a vested interested in making things safe,” he said.

A public hearing on the project was held in Wendover last Thursday, and another was held in Tooele last month. Previous hearings were also held in Salt Lake and Dugway.

Public comment can still be submitted regarding the project by email to Bonnie Robinson, public information officer with Dugway Proving Ground, at bonnie.a.robinson.civ@mail.mil.

On the other end of the project approval project is Jack Rabbit 2, a test in collaboration with the Department of Homeland Security to examine the way chlorine gas moves through an urban environment.

Damon Nicholson, project manager for Jack Rabbit 2, said the project, which received its final signature of approval last week, will release different quantities of chlorine gas into a fabricated urban environment near the center of Dugway Proving Ground.

Observing the way the gas moves will help hone models of how it would behave under different conditions if it were to spill, he said.

Chlorine gas is shipped across the country, often in 90-ton train tankers, and is used for industrial manufacturing and petroleum refining.

On occasions where chlorine gas-bearing trains have crashed and the containers ruptured, the ensuing spill has resulted in Hazmat cleanup, property damage and death to people or animals in the area.

For example, nine people died after a spill in Graniteville, South Carolina, in 2005, while three were killed in a 2004 spill in San Antonio.

Because chlorine is a heavy gas, which makes its properties somewhat different than lighter gases such as nitrogen or hydrogen, chlorine is difficult to predict just how it will behave with various terrain and weather conditions, said Nicholson.

By refining the predictive modeling, he said, responders can have a more precise idea of the extent of the affected area, which can save time, resources and money from being used unnecessarily on unaffected areas.

The test with a mock city block will also help gather data on how people can more effectively shelter in place should a chlorine gas spill occur in their area, he said.

Nicholson said the mock city will be constructed in the spring, with the first loads of chlorine scheduled to be released next summer. Tests will be repeated and refined for two summers afterward, with approximately 18 to 20 releases of various amounts per group of tests, he said.