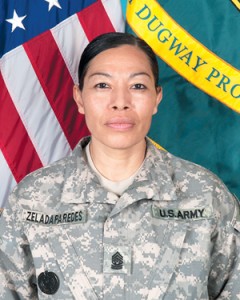 In an unusual change of commanding personnel, Dugway Proving Ground got a new sergeant major today.

Sgt. Maj. Stanley Morton, who has been at Dugway since 2009, is retiring to Laurel, Md., where his wife and two children have lived for the last two years.

Morton was replaced at a Change of Responsibility Ceremony  today by Sgt. Maj. Alma Zeladaparedes, who was born in Guatemala and raised in Brooklyn.

Zeladaparedes enlisted in the U.S. Army in 1987 as a chemical operations specialist. She most recently served as division Chemical, Biological, Radiological, Nuclear, Explosives (CBRNE) sergeant major for the 1st Infantry Division at Fort Riley in Kansas.

The rank of sergeant major is the highest that can be achieved as a non-commissioned officer. The sergeant major at Dugway essentially serves as second-in-command to the commanding officer, Col. Allen Scott Estes. According to Dugway Proving Ground public affairs, female sergeant majors are rare, and Zeladaparedes may be the base’s first.

It is also rare Army-wide for sergeant majors to step down before their post is completed at a regularly scheduled change of command, which would be this summer at the  earliest, according to Dugway public affairs.

Yet, is not unheard of when the officer has exceptional circumstances, such as them or a close family member becoming seriously injured or ill, or other extenuating family circumstances.