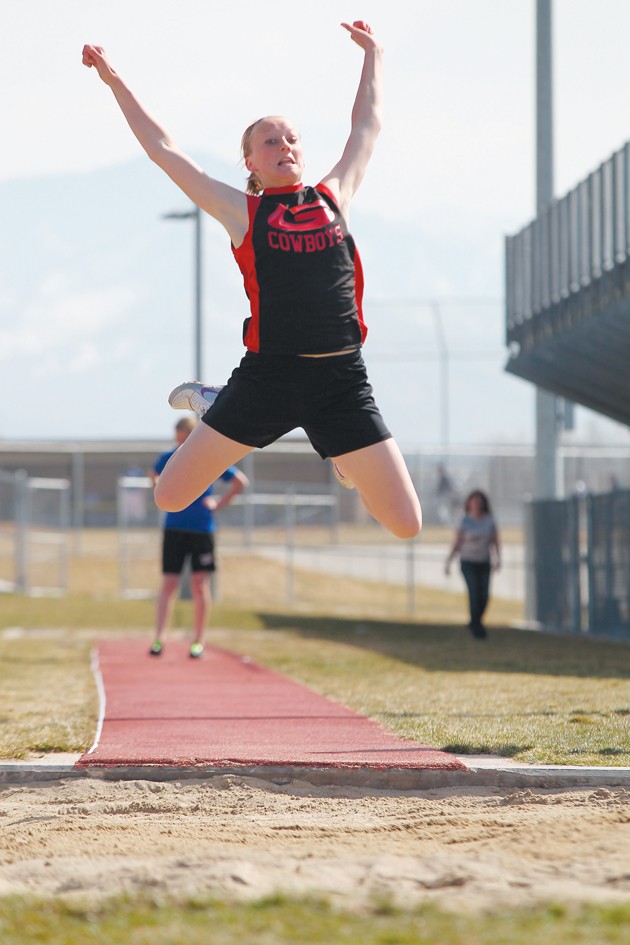 The Grantsville High School track team will look to senior Ben Seekins and junior Hailey Stevens to lead it to strong finishes the final five weeks of the season.

The GHS pair already have led by example the first half of the year.

Seekins is a talented sprinter and has been at the top of the leaderboard throughout the first half of the season in the 100- and 200-yard dashes. Stevens is a top jumper who has soared to lofty marks in both the high jump and long jump.

“Ben is really taking his senior season seriously,” said assistant coach Mary Ann Harrison. “He is working hard to leave his mark on our team, and his times are showing it.”

Stevens was named Female Athlete of the Meet at the Delta Invitational on April 6 and is trying to establish marks in all the hepthalon events. She is a candidate to compete in the hepthalon at the BYU Invitational on May 3-4, an honor which is granted to only nine athletes among all the competitors in 3A, 4A and 5A.

“Hailey has put together some great performances over the last couple of weeks,” said her mom and GHS head track coach Traci Stevens. “Her athleticism has shown as she has posted solid marks in new events, as well as establishing herself among the top jumpers in the state.”

Stevens cleared the bar at 5-feet-4-inches Friday at the Juab Invitational to bring home a second-place medal at the mega track meet. The junior also holds the ninth farthest throw in 3A in the shot put.

Bren Durfee, who has received a track scholarship at Weber State University, has posted the second fastest time in 3A in the 400 yards at 52.18.

“You can always count on Bren to give you everyting he has in the 400. He has not run much this season due to injury, but we expect him to come storming back now that he is healthy again,” Harrison said.

Ben Rigby holds the eighth-fastest time in 3A in the 300 hurdles. “Ben has been putting in extra time to get his hurdle form down, and it shows in his races,” Harrison said.

In the long-distance races, Colin Arave is battling hard to clock a state-qualifying time. On Friday at Juab, he placed sixth in both the 800 meters and 1600 meters.

“Colin has improved his mile time every time he has run it this season, and he is still working hard to try to qualify for state,” said assistant track coach Scott Mouritsen. “He ran the 800 the first time this season at Bear River and then improved his time about 6 seconds to qualify for the BYU Invitational.”

Christensen placed at state last year in the high jump and also has topped 5-feet-4-inches along with Stevens to give them the third highest leaps in 3A. The highest jump in 3A this year is from Union’s Audrey Muir at 5-feet-6-inches. Union’s Kautai Kafusi is second at 5-feet-5-inches.

“Jen has proven that she can compete with the best high jumpers in the state. She is working on her confidence and consistency as we move into the second half of our season,” said coach Traci Stevens.

“Anna has set a goal to qualify for state in the long jump this season. She is working hard at practice, and we anticipate that as her technique improves, her performances will just keep getting better and better,” said coach Stevens.

“Whitley is becoming the leader with the hurdlers. She takes charge of the drills and gets everyone going. Whitley is working very hard this year, and it is showing in her performance,” coach Harrison said.

Grantsville hosts Stansbury in a meet on Wednesday, and travels to Ben Lomond on April 24  for a meet with Morgan and the Scots.

The Cowboys will be part of a state-qualification meet on May 1 at Stansbury High School. The Tooele County Invitational on May 1 will include Grantsville, Stansbury, Tooele, Dugway and Wendover.