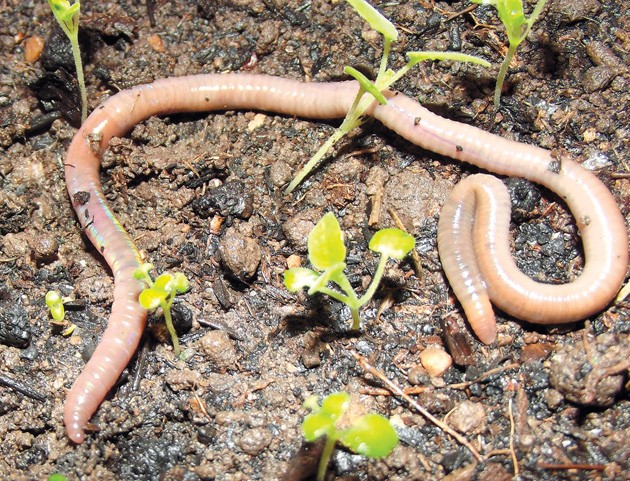 An earthworm wriggles in the dirt in the author’s yard. It was returned safely to its natural habitat after being photographed.

April 4, 2013
Earthworms: Not as boring, useless as they first seem

Earthworms are one of the most commonly known critters on earth and although they may seem simple and even perhaps boring, they are actually quite fascinating.

For example, when earthworms surface when it rains, many think it’s to escape the deluge of water and drowning, but this is false. Not only can earthworms survive days underwater, but they surface in the mud because it gives them the leverage needed to travel and find mates.

Earthworms and their reproduction also have some interesting facts. Earthworms are hermaphrodites, meaning they contain both male and female organs and when they mate they are able to fertilize each other’s eggs and both become impregnated.

Many people also don’t know that earthworms don’t have lungs. Instead, the slimy substance on their flesh, called mucus, absorbs air, allowing earthworms to breathe through their skin. In order for this to happen, worms must keep their skin moist. They not only need to avoid predators, but the sunlight too. If their mucus dries up, worms suffer for about an hour of suffocation before they pass on. To avoid this, worms detect light with photoreceptors allowing them to differentiate dark from light.

Earthworms are very sensitive to movement. They can feel when something is too close or nearby, which helps them detect approaching predators.

Earthworms are cold-blooded and live for one to two years in the wild, but they can live up to six years in captivity. Earthworms don’t have hearts. Instead, they have five organs called an aortic arch. They also have glands that help digest calcium from the dirt.

There are about 4,400 different kinds of earthworms in the world. The largest earthworm ever found was in South Africa and measured up to 22 feet.

Earthworms are not pests to gardens, crops or plants because they can eat their diseases and small bugs.

Addie T. Lindsay, 16, is a writer and accomplished photographer of wildlife creatures big and small. She can be contacted at CritterChatter@live.com.