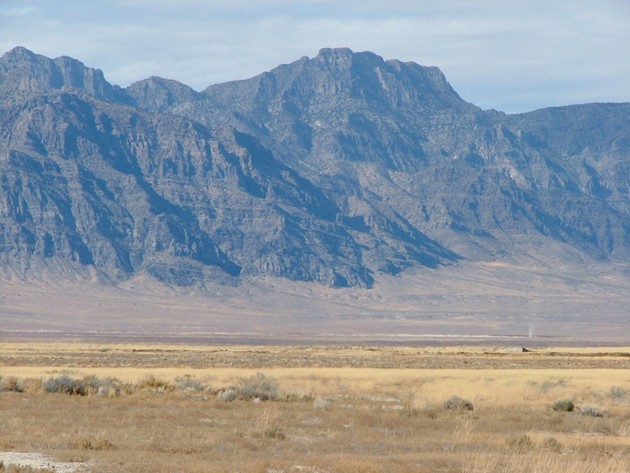 George H. Hansen Peak is the tallest peak in the Fish Springs Range. The peak is visible from the Pony Express Trail.

Editor’s note: This is another installment in a multi-part series on exploring the Pony Express Trail through Tooele County. Last week’s article entailed the Black Rock station area.

Heading west from Black Rock an imposing, rugged mountain range comes into view across the barren valley. It rises precipitously from the valley floor in stacked cliff shelfs to the summit of 8,523 foot-high George H. Hansen Peak, the highest point in the range and named after the famed Brigham Young University geologist.

This ancient bald peak frowns down upon Fish Springs Valley, which features some of the most difficult terrain that a Pony Express Trail rider, emigrant and stagecoach had to cross along the journey to California through the West Desert.

The Pony Express Trail runs straight across Fish Springs Valley, but back in the 1860s, travelers frequently had to modify their route depending on conditions of the trail. This section was one of the most soggy, dusty or bumpy depending on the season.

As Pony Express Trail Rider Howard Ransom Egan put it, “It was the worst part of the desert.”

A soldier, in Col. Patrick Edward Connor’s column of California Volunteers heading east in 1862, described a messenger arriving at Fish Springs after crossing the valley from Black Rock:

“When the correspondent arrived, the sun had well-nigh broiled most of the vigor and all of the patience out of his body, he was very thirsty. If he had a face, a thick stratum of alkali dust rendered it invisible.”

Not much has changed in Fish Springs Valley. Along this stretch, if you roll down your vehicle’s windows too soon after a stop, you will be enveloped in alkali dust and covered as if by volcanic ash from head to toe.

A good rule of thumb in the desert when you stop your vehicle is to wait several seconds to let your dust plume pass by before you open your door or windows.

The dusty road eventually turns west to cross the valley and becomes somewhat of a dike as it crosses the wasteland and enters Fish Springs National Wildlife Refuge, which was established in 1959. According to statistics on the NWR website, the refuge consists of 17,792 acres, 10,000 of which are wetlands centered around a complex of springs that discharge more than 22,000 acre-feet of water annually.

The NWR site also states that the refuge’s waters are supplied by spring flows that arise from artesian pressure and hydrothermal convection along fracture zones in the Great Basin Carbonate Rock and Alluvial Aquifer. It’s strange to think about how a deep crack in the earth allows all of this water to issue forth in such an unlikely place as at this barren corner of the desert.

Back in the 1860s, Fish Springs was a major station on the Overland Trail because of its reliable water. As stated in a previous article, the Pony Express rider was not alone in the West Desert. The rumbling stage coaches of Ben Holladay’s Overland Empire were on the road, as well as moving freight and passengers 24/7 between Salt Lake City and Sacramento, California.

Holladay was known throughout the Old West as the “Stagecoach King” and when the Pony Express failed, he swooped in and acquired all of the line, stations and holdings of the company.

At one point according to several sources, Holladay owned 20,000 stagecoaches, running over 3,000 miles of routes and was the largest single employer in the United States. An article published on the Maritime Express website states of Holladay:

“He stirred things up wherever he went and was described as a “bit of a dandy,” dressing like a river boat gambler. He was said to be wholly destitute of fixed principles, honesty, morality or even common decency.”

It likely took such a man to make such a complex and demanding enterprise work across a broad and difficult stretch of terrain, most of it through Indian country. Holladay was a talented man who was also an unlikely friend and trusted ally of the Mormons. A future article will take a closer look at Holladay as this fascinating man played an important role in much of the activity that occurred along the Pony Express Trail in the West Desert.

Many famous people crossed the country on the stage coaches that were part of Holladay’s empire. One of the best descriptions of the Fish Springs valley I could find was given by Sir Richard Burton when he crossed the valley in 1860.

He stated, “In places warts of earth tufted with greasewood emerged from the hard flakey, curling silt cakes in others, the salt frosted out of the damp black earth like the miniature sugar plums on chocolate bon bons. We then fell into a saline resembling a freshly fallen snow. The whiteness changes to a salty blue, like a frozen pond when the water still under lies it, and to make the delusion perfect, the black rutted path looked as if lately cut out after a snow storm.”

Anyone who has driven Interstate 80 west to Wendover can appreciate Burton’s description of ruts cut into the level plain. As you travel that road, you can see two tracks of vehicles that go only so far into the plain on the side of the road that end abruptly. They were cut by someone who thought the surface was solid and quickly realized the miserable truth as they got mired in the salty muck.

Burton goes on to explain however that the worst part of the valley was the sloughs:

“The tule, the bayonet grass and the tall rushes enable animals to pass safely over the deep slushy mud, but when the vegetation is well trodden down, horses are in danger of being permanently mired. The principle inconvenience to man is the infectious odor of the foul swamps.”

What were the vehicles like that the passengers rode? Most of them were “Concord” stages built by the Abbot and Downing Company of Concord, New Hampshire. The Concord stages were the top of the line in their day, offering shock absorption through rawhide braces that allowed the coach to sway back and forth. This capability was essential because it allowed the coach to gain momentum when mired so it could extricate itself. This capability did not always work, however, as evidenced by one trip across Fish Springs Valley. Howard Ransom Egan stated that he counted three stages mired and abandoned in the slough.

The Concord stages were painted bright red in most cases with handsome yellow and black lettering. According to an article written by Larry Noyes entitled, “The Stagecoaches – Their origin and place in History,” their interiors were upholstered with padded leather as were the seats. But some passengers complained that the seat pads were harder than the wood beneath them.

Burton concluded: “… At about 3 a.m. cramped with cold, we sighted the station (Fish Springs), and gave the usual ‘yep yep.’ A roaring fire soon revived us, the strong ate supper and the weak went to bed. Thus ending a somewhat fatiguing day.”

In next week’s article we will take a closer look at how uncomfortable a trip across the West Desert in a Concord Stage could be. We will also make a more in depth study of that incredible anomaly in the desert — Fish Springs.