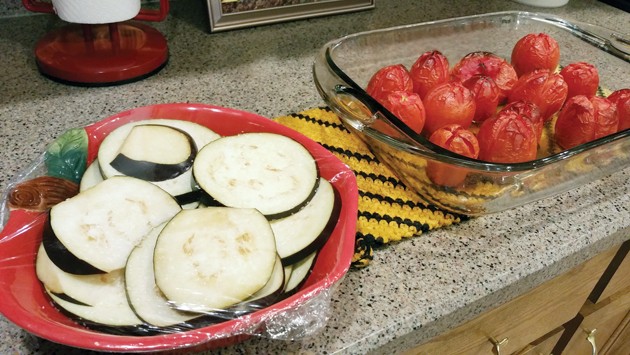 A batch of sliced eggplant and roasted tomatoes sit ready to be made into eggplant parmigiana.

September 8, 2016
Eggplant is way cooler than I ever thought

There it was, sitting on my dinner plate. I was all of eight years old, with all the culinary wisdom a youngster of that age can muster. I wasn’t sure what it was, but I knew it was something new that my mom had put on the dinner table that evening.

It looked like a purple-edged pancake, only lightly fried, golden in color, and with a cornmeal crust. “I don’t like this!” I blurted. My mom, who had the rule that you ate what was put on the table (how unique!), replied, “do you know what it is?”

“Nope — but I don’t like it!” “Have you ever had any?” “No ma’am.” She continued, “well then, how do you know you don’t like it?” Just as I started to continue my thoughts on this, she gave me “the look.” It wasn’t going to go well for me if I continued down the path of criticizing what had been provided for me that evening.

To encourage me to sample it, Mom said, “I don’t know if you’ll like it or not. I think you will, a lot of people do. You need to eat that one piece I’ve put on your plate, and we’ll go from there.”

As we began to eat, I decided to give it a try, or maybe it was to just get it over and done with so I could get on to other “good stuff.”

If my mother had not had the culinary courage to put different things on the table over the years for us to try, I would have missed out on some good eating! That first bite of eggplant was the beginning of a love affair with many things eggplant.

I’m aware that there are many people who don’t like eggplant. At the risk of sounding trite, it could be the way that it’s been prepared. It’s also possible that the taste puts you off so much that me telling you, “You haven’t had eggplant the way I prepare it” is on par with saying “you haven’t had horse manure the way I prepare it!” Fair enough. If you are in that camp, please humor me and stick with me for the rest of this article.

Where did eggplant get its name, anyway? As it turns out, we’re not sure. Like many vegetables we enjoy today, eggplants were once wild varieties that have been “tamed” through hybridization, enhancing and diminishing desirable traits. While we are most familiar with the sizable shiny-skinned purple version, eggplant actually comes in a wide variety of sizes, shapes, and some other color combinations beyond that beautiful deep violet.

A once-common eggplant variety was a small-fruited white version that looked amazingly like poultry eggs. So it’s not a stretch to think it’s a strong possibility these types of fruits earned the name we know today.

Some of the main characteristics that plant breeders have worked to address fall in three areas: size, prickliness, and bitterness. Today, eggplant can be grown using several different-sized varieties. Shapes vary too; you can get small egg-sized fruits, as well as cucumber-shaped species, and the familiar larger sizes, approximately as big as a quart jar.

Wild eggplant tends to be very prickly to help ward off animals that would readily eat it if it weren’t a bit inconvenient to do so. For the most part, this characteristic has been bred out, with only a remnant of thorniness remaining. Even so, I’m careful when I’m harvesting or inspecting the plants. I’ve had a thorn or two get me over the years. A light grasp, before committing to a full grip to harvest the fruit, is a good way to go. Or wear some leather-palmed gardening gloves.

Bitterness has proven to be most difficult to eliminate. The seeds tend to be sharp-tasting, and the skin can be edgy to the palate as well. Fortunately, that can be addressed during preparation. The cooks that have gone on before us have figured out how to essentially eliminate the bitterness, while bringing eggplant’s delicious flavor to center stage. For fried eggplant, such as parmigiana, or like my mom served me as a kid, cut the eggplant into disks about 1/4 inch thick and put it in a pan a layer at a time. Scatter a moderate amount of salt over the top of it. Add another layer and repeat until all the pieces have had salt sprinkled on them. Cover the pan with a layer of plastic wrap and let it set at room temperature for an hour. You’ll see beads of juice form as the flesh gives up its moisture. The liquid will be brownish. If you taste a drop of it, it will be quite bitter and salty.

Use this salting step where you want the eggplant to be a creamier and less fibrous texture. If you are roasting or grilling it, it won’t make much difference. Experiment a bit to get the results you like.

After about an hour, drain off the liquid and rinse the eggplant pieces, patting them dry. You will see that their texture has changed a bit. Now, for fried eggplant or parmigiana, you will need to bread them. For years, I struggled with breading and had, in fact, given up on it. That is, until our daughter visited us recently! During her chef training, one of the proficiencies she had to demonstrate was breading (who knew?). She quickly demystified this for me by explaining that breading is done wet to dry to wet to dry. Huh?

In the case of eggplant, those rinsed and patted pieces still hold enough moisture to begin the breading process. Take a paper bag, or large zipper plastic bag, and put a half-cup or so of flour in it. Put three to five pieces of eggplant in at a time. Shake vigorously to coat the surface. Remove and place on a plate, keeping flat. They can be laid on top of each other. Repeat until all the pieces are coated.

Next, scramble a few eggs and a dash of milk in a shallow pan (a square cake pan works great). Use another small round cake pan and put bread crumbs in it. If you prefer, you can use cornmeal or panko crumbs as well.

Now, using tongs, pick up a couple of floured pieces and place them in the egg mixture. Swish around the mixture until the eggplant is coated. Use the tongs to toss a couple at a time into the bread crumbs. Move the pan back and forth on the counter rapidly to “splash” crumbs onto the tops. The bottoms will automatically be coated. Move the coated pieces onto a tray, taking care not to rub the breading off.

Begin frying the eggplant in 350- to 400-degree oil. It should not be smoking, but it should be hot to allow the dish to cook quickly and to minimize oil absorption. Fry each side to your desired color and move off onto a plate with paper towels. You can either eat them as is, or use them for eggplant parmigiana — my favorite!

To make parmigiana, you will need a moderate-sized baking pan that has been lightly coated on the bottom with cooking oil. Arrange the eggplant slices, in rows, like fallen dominoes. Keep some space between the rows and the side of the pan. Now lightly dress the rows with marinara sauce (I gave you the recipe week before last!) down the center, leaving the edges uncovered. Now, sprinkle grated mozzarella cheese down the middle of each row. Bake at 350 degrees for 30 minutes. Remove from the oven and let rest for a few moments to firm up. Enjoy!

One last thing — why is eggplant bitter in the first place? It’s because eggplant — like tomatoes, potatoes, and peppers — belong to the nightshade family. You may know of the dangerous side effects of belladonna or deadly nightshade, but there’s even a more well-known mood-altering nightshade — tobacco! Eggplants secrete a minute amount of nicotine alkaloid — which has a sharp taste — in their seeds. Now you know.