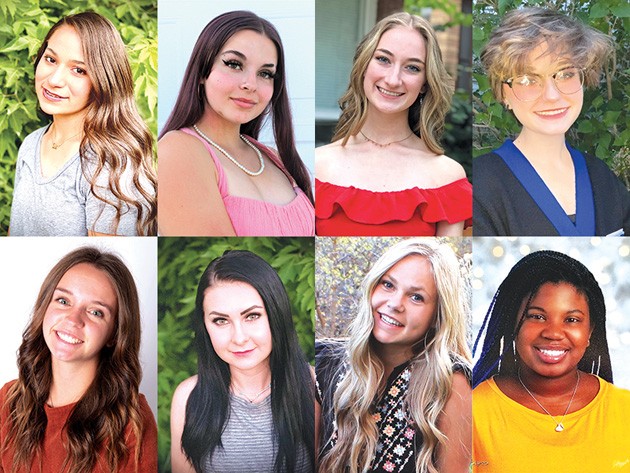 Eight contestants will compete for the title of Miss Grantsville at the Grantsville High school auditorium on June 30 at 6 p.m.

This will be the 70th Miss Grantsville Pageant. The pageant is a community-based volunteer effort and provides an academic scholarship to the winner.

The contestants, who range in age from 15-23, are required to submit a packet of paperwork, and must meet minimum GPA and other standards.

The winners are selected by a panel of judges based on a review of their submitted paperwork, an interview, answering an on-stage question, attitude, the performance of a talent and a walk in a formal gown.

Below is a list of this year’s pageant contestants:

Vanessa is the daughter of Russ and Heidi Wallis. At 15 years old, she is the middle child of three girls. During high school Vanessa was in many honors programs. She was also part of the Health Occupation Students of America. Vanessa enjoys playing basketball and running. She also loves watching movies, hiking in the mountains and weightlifting. Her future plans are to pursue a career in sports medicine.

Kimberly Faith Goodell is the daughter of Joey and Michelle Goodsell. She is 18 years old and the middle child in a family of five. Kimberly loves her family more than anything. She loves fitness, singing and theater. Kimberly plans to attend Salt Lake Community College and get a degree as a dental hygienist. Her greatest achievement was buying her car, which took over a year and two jobs, but she was able to buy it on her own. Faith’s role model is her father. He is hardworking and respectable. Her father graduated from high school early and has worked multiple jobs to be able to raise his family. A huge flaw of Faith’s is being a terrible driver. Most of her friend’s hate riding with her.

Emma Scout Sutton, or Scout, is the daughter of Brad and Heather Sutton. She is 19 years old and is the youngest of three children. Scout enjoys skiing and country swing dancing, and is a current ballet instructor. In high school, Scout was a member of the National HonorsSociety, the Movement Mentor program, and the girl’s tennis team. During college, she has been a member of many organizations including Friends for Sight, Make-A-Wish Foundation, Huntsman Cancer Institute, Utah Coalition Against Sexual Assault, Ballet West, and many more. Scout has been named on the University of Utah’s Dean’s List twice and holds multiple leadership positions. Scout plans to graduate from the University of Utah with a Bachelor’s degree in fine arts. She plans to attain a job in the entertainment industry as a professional ballet dancer, while continuing to teach ballet.

Hailey Beck Taylor is the daughter of Heather and Sheridan Taylor. She is 16 years old. Hailey is very proud of her Grantsville heritage. Her 3rd great-grandfather came here from Nauvoo in 1850. She has four siblings, two brothers and two sisters. Hailey hopes to be a photojournalist for our local newspaper while finishing high school. She would like to attend Utah State University just like her parents. Hailey loves music and art of many kinds. She loves to write, create music, design and basically anything else creative. Hailey is currently enrolled at Snow College accelerated online program. She expects to get an associate degree while still in high school. Hailey wants to be a teacher, because she has a major respect for anyone who works in a school environment, including her mother and many teachers in the community who make a difference every day.

Megan Taylor is the daughter of Sheridan and Heather Taylor. She is 18 years old and has four siblings.

Megan just graduated from Grantsville High School, her GPA combined with her ACT score allowed her to receive the Presidential Scholarship from Weber State University. Her hobbies include soccer and trap shooting.

While attending Weber State University on a full academic scholarship, Megan will study the nursing program to be able to work as an ICU nurse. Eventually she wants to be trained as a flight nurse for the University of Utah.

Autumn Wade is the daughter of Heidi and Russ Wallace. She is 21 years old and the oldest of three girls. During high school Autumn was involved in Junior ROTC receiving the most improved cadet award. She was also part of FFA where she studied welding and equine science. Autumn enjoys riding and training horses, working on her truck with her dad and spending time outdoors. Her future plan is to become a doctor of veterinary medicine.

Elizabeth Whitworth is the daughter of Michael and Maria Whitworth. She is 17 years old and the fourth of five children. Elizabeth enjoys soccer and dance and has made both activities a part of her everyday life. Elizabeth has been involved in Health Occupation Students of America, the soccer team and Dance Company during her high school years. She was the soccer team captain and a Dance Company artistic director. Elizabeth is an honor student who was invited to the National Youth Leadership Forum for Medicine in 2021, nominated for the Congress of Future Medical Leaders award of excellence, and selected to go on a humanitarian trip to Africa.  After graduation, Elizabeth plans to play soccer in college, and then attend medical school.

Jordyn Wilder is the daughter of Randy and Brenda Wilder. She is 17 years old and the second of three children. Jordyn enjoys reading, dancing, and golf. Her favorite subject in school is math. Jordyn has received the National Center for Women and Information Technology honorable mention award and top scholar award. She is the current National Honor Society president, the SheTech president and board member, and the General Sterling Scholar for Grantsville High School. Jordyn is proficient in the French language and has a 4.0 GPA. By the end of her senior year of high school, Jordyn plans to have completed all of her general education courses for college. After graduation, she plans to attend Utah State University where she will get a bachelor’s degree in mathematics and statistics. Jordyn hopes to one day become a math teacher or to be working at a tech company.