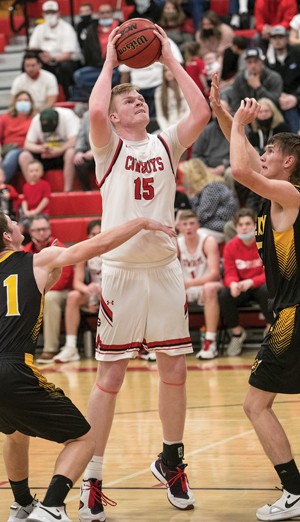 The Grantsville boys basketball team enjoyed a spectacular season under first-year head coach Nate Austin in 2020-21, finishing with an 18-3 overall record, a Region 13 championship and a third-place finish in the Class 3A state tournament.

As a result, the individual accolades have started rolling in for some of the Cowboys’ top players.

Ekins led the Cowboys with 15.2 points and 8.6 rebounds per game, with a season-high 30 points, 17 rebounds and two blocks in a 73-60 win over Judge Memorial on Jan. 27. He scored 20 or more points in a game six times, all of which came against Region 13 opponents, and he also had six double-doubles. Two of his double-doubles came in the Cowboys’ first two state tournament games against Emery and Carbon.

Allred scored 7.1 points per game to go with 3.4 rebounds and 1.0 steals per contest. He scored 15 points in wins over Judge Memorial (Jan. 27) and Richfield (Dec. 5), and he put up 12 points and seven rebounds in a state-quarterfinal victory over Carbon (Feb. 25). He had six assists against Providence Hall on Jan. 12 and three steals against Morgan (Jan. 15) and Providence Hall (Jan. 29).

McKeever’s biggest contributions came on the defensive end, though he also averaged 3.0 points, 4.5 rebounds, 3.0 assists and 1.1 steals per game. He had 16 points, seven rebounds and six assists against Summit Academy on Jan. 22, and had nine games with at least five rebounds. He dished out nine assists in the Cowboys’ 72-43 win over Morgan on Jan. 15, and added four steals in a 66-37 win over the Trojans on Feb. 3.