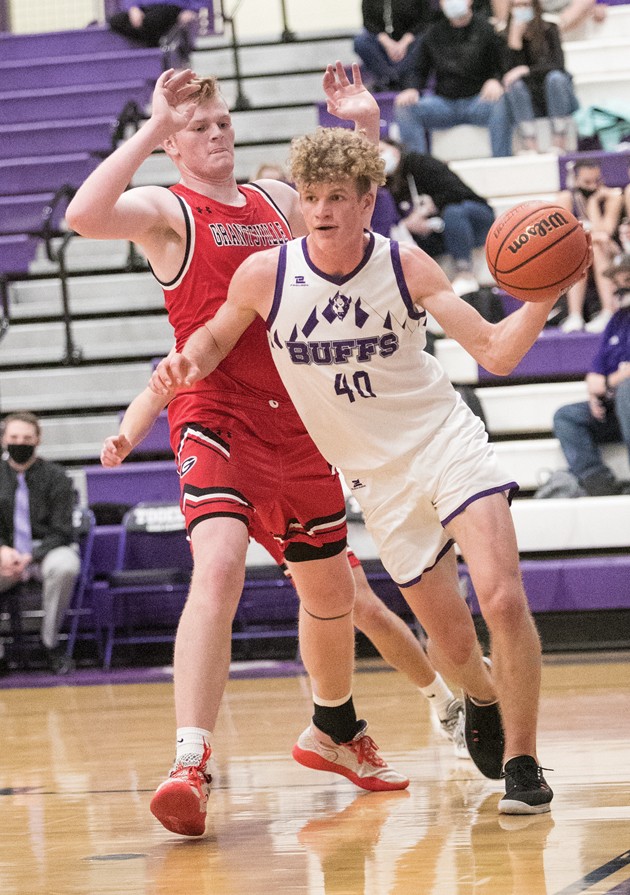 Tooele senior Justin Rogers (40) looks to make a pass as Grantsville's Davin Ekins defends during a non-region game Dec. 9 at Tooele High School. Both Rogers and Ekins were First Team All-State selections, with Rogers making the Class 4A team and Ekins making the Class 3A team.

Ekins, the Region 13 Co-Most Valuable Player, helped lead Grantsville to an 18-3 overall record and the Region 13 championship, as well as a third-place finish in the Class 3A state tournament. He averaged 15.2 points and 8.6 rebounds per game, including a 30-point, 17-rebound effort against Judge Memorial on Jan. 27.

Rogers earned co-MVP honors in Region 10, averaging 20 points and just over 10 rebounds per game for Tooele. He also led the Buffaloes in 3-pointers made, assists, steals and blocks.

Grantsville junior Carter Killian was named to the Class 3A Second Team and senior Tuhker Mulford earned a spot on the Third Team. Killian averaged 10.7 points, 4.8 assists, 4.0 rebounds and 2.1 steals as the Cowboys’ starting point guard, and Mulford was one of the state’s top 3-point shooters, hitting 46.7% (64-of-137) from long range while averaging 12.3 points per game.

Stansbury’s Landen Giles was an Honorable Mention selection in Class 4A, averaging 13.4 points per game with a team-high 49 3-pointers made for the Stallions.

Wendover, which reached the Class 1A state championship game for the first time in program history, placed two players on the Class 1A First Team with another earning Honorable Mention. Senior guard Jaime Montalvo averaged 19.1 points per game for the Wildcats, and fellow senior Pedro Alvarez scored 15.0 points per contest to join Montalvo on the First Team.