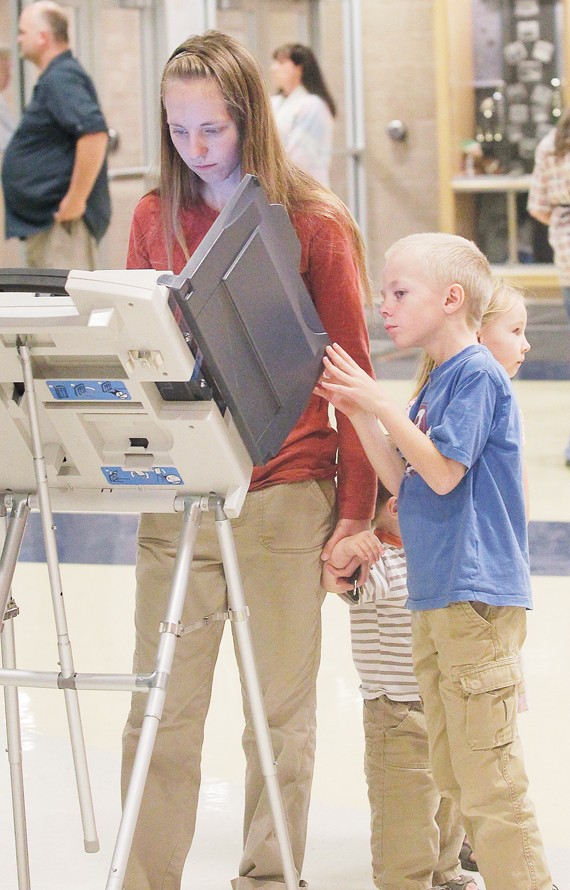 Voter turnout Tuesday night reached 65 percent, compared to 63 percent recorded at the close of polls in 2008.

The all-time high voter turnout for a presidential election in Tooele County was 90 percent in 1964 when Lyndon Johnson ran against Barry Goldwater.

“We had a lot of people that voted just for president and nothing else,” said Gillette. “I heard voters talking about a feeling that the country was at a turning point and the presidential election was seen as pivotal, regardless of who they favored.”

While overall voter turnout was up, early voting declined.

Some of those 2008 early voters may have ordered an absentee ballot this year so they could vote by mail.

“We were mailing out as many as 10 absentee ballots a day,” Gillette said “I’ve never seen an election with that kind of volume of absentee requests.”

Gillette credits part of the surge in absentee ballots to the Republican Party’s door-to-door campaign to sign up people to vote by mail.

Gillette also thinks people like the idea of voting at home.

“You don’t have to leave your house to vote,” said Gillette. “You can also can take as long as you want to read the ballot without feeling pressure from people standing in line.”

Romney’s commanding lead in Utah was down to simple popularity, according to John O’Donnell, Tooele County Democratic Party chairman.

“There is no doubt about it, Romney is viewed in Utah as a homegrown boy,” said O’Donnell. “And everybody wants their homegrown boy in the White House.”

Romney’s appeal may have caused Democrats to cross over and vote for him as well as Democrat-leaning independents, O’Donnell said.

It’s unclear if the Tooele County Republican party’s door-to-door campaign to get out the vote, dubbed “project Demo-lition,” succeed in bringing out more Republican voters, as Chris Sloan, Tooele County Republican Party chairman hoped, or if Obama supporters, knowing that defeat in bright red Utah was inescapable, decided to stay home. “In project Demo-lition, we targeted voters registered as Republican that either had not voted recently or that voted only occasionally,” Sloan said. “I’m sure our efforts were part of the increase in Republican voter turnout.”

In 2012, a total of 3,930 Tooele County voters went no further than the first screen on the ballot and selected a straight-party ticket vote for Republicans. That’s 482 more straight-party Republican votes cast in 2012 in the county than in 2008, for a 14 percent increase.

This year also was marked by an unusually large number — four — of registered write-in candidates.

However, in the election for Erda Township Planning Commission, two write-in candidates did win seats.

Both candidates only needed to get one vote to win, as they were running unopposed, according to Gillette.

Griffith walked away from the election with 12 votes and Foster collected nine votes out of a total of 836 voters from Erda that went to the polls on Tuesday.

Gillette still has over 1,000 provisional ballots cast by voters that either did not bring proper identification with them to the polls or for some reason their name did not appear on the voting rolls when they went to vote. She is also collecting absentee and vote-by-mail ballots.

Any ballots postmarked by the day before the election and received by the time county commissioners conduct the final canvass of votes will be counted, according to Gillette

There is one race that may have to wait for the final canvass, which is usually conducted two weeks after the election, before the winner is determined. In the North Tooele Fire District, Fred Burton holds a 10-vote lead over Michael Frieden, 1,747 to 1,737.

“It’s hard to look at a one-time increase in voter turnout and call it a trend,” said Sloan. “But I think the possibility is there that we can go forward from here and have a larger turnout four years from now.”