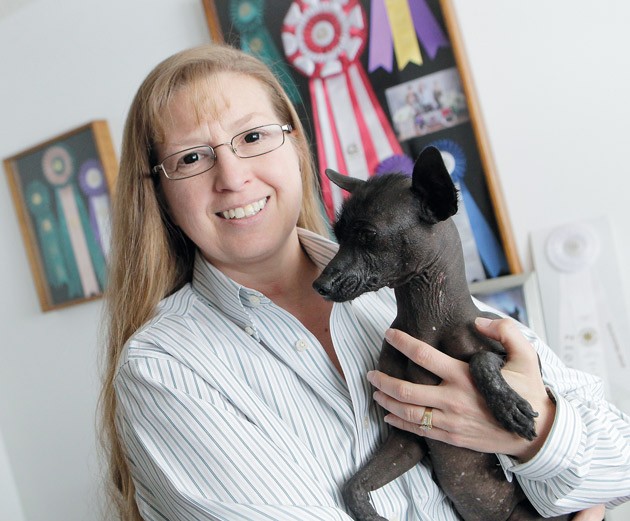 Louise Ekenstam holds Elo, a xoloitzcuintli, Wednesday at her home in Tooele. Elo is the only dog registered from Utah to compete in the Westminster Kennel Club’s 137th Annual All Breed Dog Show in New York City.

Elo the dog likes the simple things in life — sitting in owner Louise Ekenstam’s lap, barking at strangers and eating cookies made especially for dogs — but her life is far from simple.

Next week, Elo will be one of 2,721 dogs from around the world competing in the Westminster Kennel Club’s 137th Annual All Breed Dog Show in New York City. Elo is a 4-year-old xoloitzcuintli (pronounced show-low-its-queen-tlee), also known as a xolo or Mexican hairless dog. It is considered a non-sporting dog. Elo is the only dog registered in Utah that will be make the trip to the Big Apple.

The Westminster Kennel Club is America’s oldest organization dedicated to the sport of purebred dogs. It was established in 1877 and continues to be the second longest continuously held sporting event in the country, just one year behind the Kentucky Derby.

Ekenstam, of Tooele, is Elo’s owner, breeder and handler. Ekenstam has been showing Elo, as well as her littermate, Malinal, for the past two years. She typically enters them in dog shows around the western United States, like those sponsored by the American Kennel Club and Eukanuba.

There are various ways a dog can be invited to participate in the Westminster show, but Elo was chosen because she is one of the most awarded xolos in the nation. The top five dogs of each breed, specifically dogs that receive the most awards through AKC licensed shows, are invited to Westminster.

Ekenstam said she didn’t start showing her dogs until she met a woman in Washington who was a former AKC judge and had bred and worked with xolos before.

“She’s done a lot of training, so she’s been showing me how to present my dogs in the ring,” she said. “It’s more than walking in the ring and having the dog follow you. We’ve made mistakes along the way because I’m new. Professional handlers handle a lot of the dogs, and I’m not at the level nor would I be able to afford that. I show and handle my own dogs. Elo’s done well, and she enjoys it and thinks that she’s important.”

Ekenstam never had intentions of showing her dog, but after being prompted by her friend in Washington, she decided to start showing Malinal. As an afterthought, she started showing Elo too so that Malinal would have a companion. Elo quickly caught up to Malinal and then surpassed her by winning dozens of awards.

“I didn’t think Elo had what it took because it’s hard to get her to pay attention,” she said. “I had no expectations of her. Early on, Malinal consistently beat Elo, but as Elo became more comfortable in the ring, Elo would beat all the other dogs.”

Ekenstam owned Elo’s mother. After breeding her, four puppies came from her litter, including Malinal and Elo.

“I had my first Xolo when I was a child and as an adult, I was able to locate a breeder in Washington state and purchased my first show quality dog from her over 11 years ago [Elo’s mother],” Ekenstam said.

Although Westminster will be Elo’s final turn as a show dog, Ekenstam plans to breed her and hopes to create champions out of her puppies.

“I will probably retire Elo after Westminster and may breed her in the future so that I can start again with one of her puppies,” she said.

“I’m pretty fortunate that I breed, own and handle them in my home,” she said. “A lot of dog owners don’t live with their dogs, but I do.”

The xolo is a rare breed. They were recognized as a breed until 1959 by all dog shows, including Westminster and the AKC, but then they were dropped because of too few dogs worldwide, Ekenstam said. Just last year they were once again recognized and were able to show for the first time since 1959.

“It’s probably one of the most ancient breeds out there,” she said. “In ancient times, they were buried with [prominent leaders] in Mexico because they were believed to lead them into the afterlife.”

During the show, Ekenstam will have about two minutes to show Elo in the ring and have her judged. The only way she’ll continue on is if she wins the round. The dogs are judged first by breed, then by group, then by winners of each group. There will be three xolos, 267 non-sporting dogs in the competition, and seven different groups in the competition. Only one best in show award is given.

Ekenstam said she’s not nervous to be on television, but she is nervous to show Elo because she doesn’t have much experience in handling dogs at a show.

“It’s very stressful to show my dog because I’m showing against people who do it for a living and have so much experience,” she said.

Ekenstam doesn’t have any expectations for the show — she’s just happy that Elo was invited.

“I’m sure there’s individuals that have shown for many years and have never been invited,” she said. “I have no expectations but the opportunity to go and experience it.”

Although attending the dog show will be Ekenstam’s first time to New York City, she doesn’t regret not being able to vacation while she’s there.

The Westminster Kennel Club’s first-ever dog show was held in 1877 at Gilmore’s Garden — the forerunner of Madison Square Garden — in New York City, and drew an entry of 1,201 dogs. The most-coveted award in the dog show, “Best in Show,” was given for the first time in 1907.