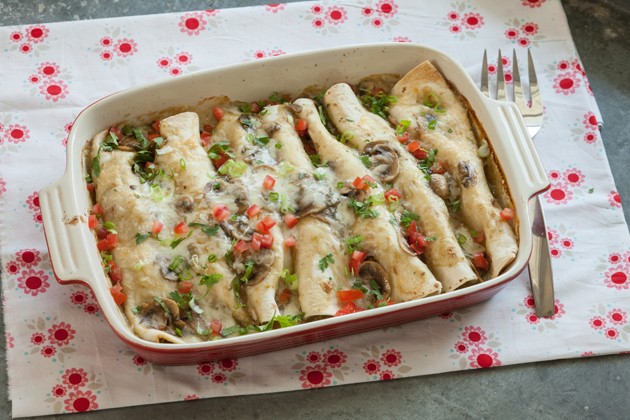 For cooks who like to do as much as possible ahead, chicken enchiladas is the ideal dish.!It can be assembled in advance, covered with foil and refrigerated.!Brought to room temperature before it goes into the oven, it soon emerges with melty cheese and bubbling hot sauce.

Green chili sauce, called salsa verde (green in Spanish), is the sauce we like to use for making chicken enchiladas.!In Mexican cooking, where green sauce is popular, it’s made with husked tomatillos, onion, garlic and chile peppers.!Here, we’ve simplified the recipe by using canned enchilada sauce, available in mild and hot versions, and adding diced onion, sliced mushrooms and fresh cilantro.!

To make the dish even easier, we shredded store-bought rotisserie chicken for the filling.!Once the filling is made, the tortillas can be filled and rolled quickly.!The enchiladas should be arranged close together in a single layer in the baking dish.!

If there are any leftover enchiladas, they freeze well.! Place them, along with any leftover sauce, in a microwave-safe dish.!Defrost in the refrigerator and heat in the microwave.

4. Cover with foil and bake 30 minutes. Uncover and bake 5 minutes. Transfer to serving plates and top with tomato, green onion and cilantro. Serves 4.