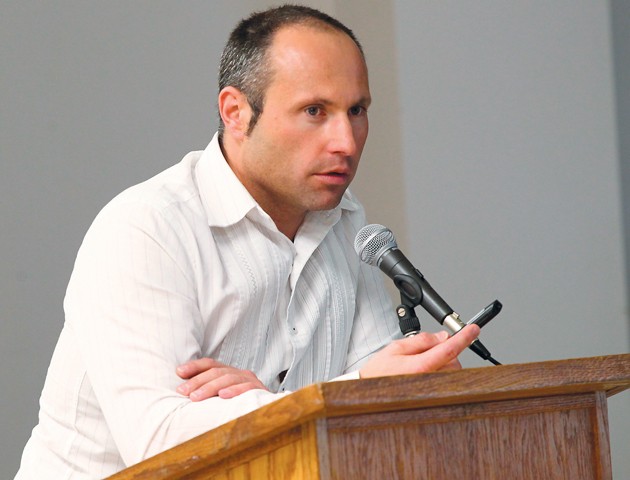 Rocco Vrba, Energy of Utah principal partner, talks about a proposed plan to build windmills on and around the Stockton Bar Wednesday at the County Planning Commission meeting. The plan involves using 25 windmills that will generate more than three megawatts of electricity each.

Stockton Bar preservationists are rallying around an energy development company’s plan to erect windmills on the unique geologic formation that separates Tooele and Rush Valleys.

Rocco Vrba, principal partner of Sandy-based Energy of Utah, described to the Tooele County Planning Commission on April 3 his company’s plan to build a wind farm along the east bench of South Mountain that would extend onto the Stockton Bar.

“I think it is a win-win situation,” said Kendall Thomas, Stockton City Councilmen and a member of the citizen’s group “Save Our Sandbar.”

“The windmills will preserve the bar while generating renewable energy,” he said. “Property owners receive a financial benefit and the county also gets a larger tax base.”

Energy of Utah’s plan for South Mountain calls for placing up to 25 windmills that will be between 260 to 325 feet high with turbine blade lengths of 130 to 160 feet. The Tooele Army Depot windmill, which is easily seen from the valley, is 225 feet tall with 130-foot long blades. It has the capability of producing 1.5 megawatts of electricity.

The wind farm project will involve a $100 million investment with  federal subsidies covering around 20 percent of the cost, Vrba said. Vrba has secured EverPower Windholdings, a Pittsburgh-based owner and operator of utility grade wind projects, as the investor for the project.

Each windmill will generate a little over three megawatts of electricity for a total of 80 megawatts for the entire project. That is enough power to run 27,000 homes, according to Vrba. The windmills will be placed along the east bench of South Mountain starting where Silver Lane makes a sharp turn to the south. The windmills will run north to the power line, west of Bauer, with six to eight windmills extending onto the Stockton Bar.

Energy of Utah has almost completed land use agreements with property owners in the project area and is in the process of negotiating an interconnection agreement with Rocky Mountain Power.

The power generated will be fed into the Wasatch Front power grid in Salt Lake with some of the power potentially coming back to Tooele County, Vrba said.

The Stockton location was selected for a wind farm location after Vrba reviewed data from wind resource models that indicate potential for power generation in the area. The site is also in close proximity to infrastructure needed to tie the wind farm into the power grid, according to Vrba.

“Five years of wind data show that windmills in the South Mountain area will produce electricity 35 to 37 out of every 100 days,” said Vrba. “Anything above 32 is considered commercial wind.”

Tooele County code is currently silent on the topic of wind farms. County staff is preparing a draft ordinance for the planning commission and county commission to review, according to Kent Page, a senior planner for the county.

County planning staff is currently reviewing ordinances in other areas, including southern Utah where the Milford wind project has 165 turbines north of Milford in Beaver and Millard Counties.

The new county ordinance will need to address issues such as visual impact, noise, environmental studies and remediation, according to Page.

Vrba touts the economic benefits the proposed windmill farm will bring to the county. The construction phase of the project, which will last about eight months, will employ around 80 workers. After construction the project will employ four full-time people.

Energy of Utah will use local suppliers whenever possible during the construction, said Vrba.

Local taxing entities will benefit from property tax on the windmills with the value of each windmill running around $3 million, according to Vrba.

Dave Carberry, who lives just south of Stockton and is a member of Save Our Sandbar, is a reluctant supporter of the windmill project.

“I love the idea of wind power and renewable energy,” he said. “The ideal for the sand bar would be to preserve it as it exists now in its natural state. After they get through digging into the bar and filling it full of concrete for the foundations to hold up the windmills, it won’t be the same. However, given the choice of windmills or having the bar disappear, I will take the windmills.”

Bryan Coulter, a Tooele County Planning Commission member who lives in Erda, was not impressed by Vrba’s presentation or the need for renewable energy.

“It’s a false pseudo-science,” said Coulter. “The taxpayers are bearing the burden of this malarkey. I just don’t see how it pays. It’s blight to the community. It’s sitting up there, these turbines spinning, there is nothing beautiful about it.”