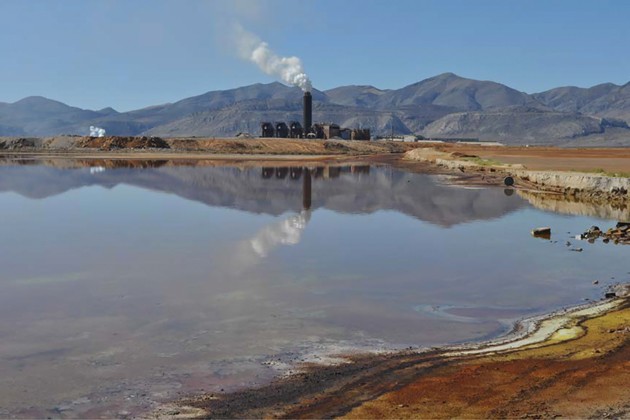 The U.S. Magnesium plant is reflected in one of the company’s waste lagoons. In the background are the Lakeside Mountains. The photo is from a PowerPoint update presentation that was given last Wednesday by the EPA at Grantsville City Library. The PowerPoint presentation will soon be available on EPA’s Region 8 website at epa.gov.

A federal study to determine how much hazardous contaminates exist at and around U.S. Magnesium continues and likely will for years with mounting sampling and analysis costs to the company.

Until the study is done, cleanup at the plant approximately 28 miles northwest of Grantsville is also likely years off.

That was the take away from last Wednesday’s update presentation on the National Priority List Superfund Site at Grantsville City Library by the U.S. Environmental Protection Agency. The study began in earnest in 2013 and the last EPA update in Grantsville was in April 2015.

During the two-hour presentation, Ken Wangerud, EPA Region 8 remedial project manager, told citizens, officials and members of the U.S. Magnesium Superfund Site Community Advisory Group that remedial investigations and assessment studies at the company are complicated, and are far from over.

The study consists mostly of collecting and testing soil, water and air samples from a five-mile radius area around the plant site to determine the presence and quantity of contaminates.

Before explaining what has been done at the plant since April 2015, Wangerud reviewed Phase 1A activities, which were done from 2013-15. They involve more than 12 sampling and analysis projects conducted on outer preliminary remedial investigation areas (PRIs) that total 30,000 acres.

Those locations are called inner PRIs and encompass 1,500 acres around the plant site. Wangerud said U.S. Magnesium produces about two million gallons of wastewater per day, which flow into wastewater ponds. In addition to those areas, Wangerud said the EPA is keeping a close eye on the Skull Valley Diversion Canal, which drains water from Skull Valley and runs through the plant site and alongside a waste pond. The canal empties into Great Salt Lake.

“It’s something we’re paying attention to,” he said. “…  It’s possible this [the waste lagoon] could effect the Skull Valley Diversion Canal and there is a suspicion some wastewater is moving into the diversion canal. All I will say is that it came to our attention in the last year and we’re putting considerable attention into that right now. Not just the EPA, but also the state.”

David Goeres with U.S. Magnesium told the audience that the canal has been dammed off in several locations to prevent any water from reaching Great Salt Lake because “we don’t want any contaminants going out to the lake.”

Also getting close scrutiny is an ongoing air modeling study at the plant, which Wangerud said is so complex it has “never been done like this before — so, we are in uncharted air.” He said five air-monitoring stations around U.S. Magnesium are taking samples every minute for a year to create sufficient data that will be analyzed to determine air-chemical deposition.

“The air releases happen in a lot of different ways out there,” Wangerud said. “But … ERM recognized pretty early on after those phase one investigations that there are two chemicals in the air we have to pay particular attention to: chlorine and hydrochloric acid. There’s chlorine being released. We do know it rapidly changes to hydrochloric acid. Neither one of those things you necessarily want to breathe or get a snootful of.”

Wangerud said another update meeting with more chemical analyses may occur within a year. Meanwhile, the EPA and the contractors will continue collecting samples and performing chemical analyses.

After Wednesday’s update meeting, Jennifer Chergo, EPA communications and public involvement specialist, said in an email it is possible all remedial investigation studies and risk assessments for the whole site could be completed by 2020 — but that is subject to change.

Tom Tripp, technical service manager for U.S. Magnesium, declined to offer specifics on how much the company has spent so far on the study, but did say it has exceeded an $8 million estimate by the EPA.

He described the study as “exceedingly thorough and exceedingly slow” and the study’s costs are a concern because the company just lost a big customer: the closure of the ATI Plant next to U.S. Magnesium.

According to Chergo, last Wednesday’s Powerpoint by Wangerud will be posted soon on Region 8’s website of www.epa.gov for public review.

The plant at Rowley has existed since the 1070s. According to the EPA, it uses electrolysis to extract magnesium from magnesium chloride salts from Great Salt Lake. U.S. Magnesium bought the plant in 2002, according to the company’s website.

The facility has the capacity to produce more than 50,000 metric tons per year of primary magnesium and other chemical products, including chlorine and salt. These products are primarily used in drinking water and wastewater treatment, as well as dust control and ice control, the website states.

The company employs around 500 people, according to Tripp.

Over the past 10 years, company officials have invested more than $120 million to improve the magnesium and chemical production technology at the Rowley plant. The improvements increased magnesium production capacity while reducing chlorine emissions by 99 percent, air emissions by 95 percent and unit energy consumption by 25 percent, according to the company’s website.

In 2007, then-Lt. Gov. Gary Herbert recognized U.S. Magnesium for its efforts to reduce emissions. The company received an environmental consciousness award as part of the Manufacturing Extension Partnership’s 2006 Manufacturer of the Year Awards at the Capitol.