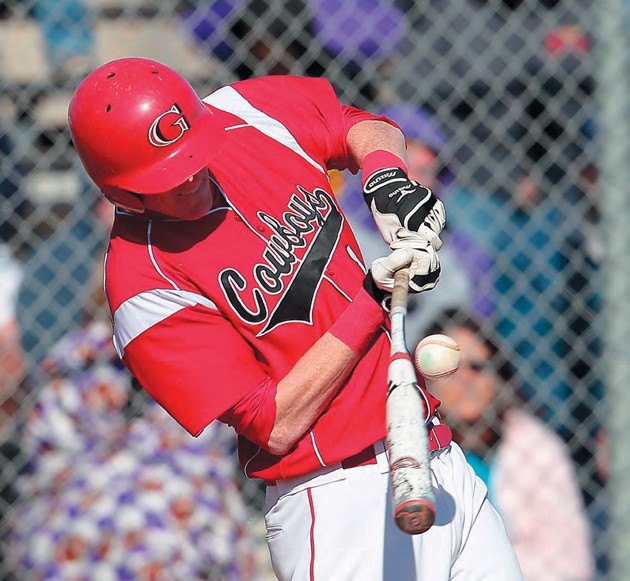 Grantsville’s Dalen Erickson hits the ball Monday against Tooele. Erickson had a single and an RBI in the game against the Buffaloes. He earned a 3-1 victory at Bear River Thursday on the mound with nine strikeouts.

Grantsville had already wasted one strong pitching performance early in the Region 11 season at Morgan and didn’t want to do the same at Bear River Thursday afternoon.

When it comes to offense, it is better late than never as Grantsville put runs on the board in the sixth and seventh innings to help use the pitching performance of Dalen Erickson effectively. Erickson pitched a gem and only allowed two hits to the Bears to earn a 3-1 victory for Grantsville in Garland.

“That was a big win for us because Bear River has kind of become our rival,” said Grantsville coach Loren Anderson. “Dalen (Erickson) was outstanding on the mound and didn’t make a lot of mistakes out there.”

Drew Sutton delivered the big blow in the seventh with a tworun triple to the gap in left-center to give the Cowboys their tworun lead that they held on to.

Kelby Landon picked up a pair of singles in the victory, including an RBI, and reached base in all three at-bats on the day. Both Erickson and Bear River starting pitcher Brock Hill were cruising early as the first four innings went by without a run, both teams had their chances early.

In the second inning, Grantsville got a runner in scoring position when Landon was hit by a pitch and then Erickson walked, but Landon was stranded at second. The fourth was another scoring chance that was hurt by a base-running blunder to again keep the game scoreless for the Cowboys.

Bear River got runners in scoring position against Erickson in the second and third inning but Erickson was able to escape those jams. The fifth inning is where Bear River broke open the scoreless game.

Keelen Hess started it with a one-out walk and then stole second to get in scoring position. With Hess on third after a ground out, Blair Ballard dropped a single into center to give Bear River a 1-0 lead after five.

Grantsville didn’t trail for long as they went right to work in the sixth when Sutton drew a one-out walk and then made his way to third on a ground out and a passed ball. With Sutton on third, Landon lined a single to right to knot the game at 1-1 in the middle of six.

Scoring became contagious for the Cowboys as they kept it going in the seventh with a twoout rally. Ky Fisher started it with a walk and then was followed by a single by Quinton Smith. With two on, Sutton ripped a triple to the gap in left-center to score a pair and give Grantsville a 3-1 lead heading into the bottom of the seventh.

Errors in the seventh inning made it a little more interesting but Erickson was able to close out his win on the mound by striking out two in the inning as he totaled nine strikeouts in the victory.

Grantsville will travel to face Logan in a non-region game Thursday at 3:30 p.m.