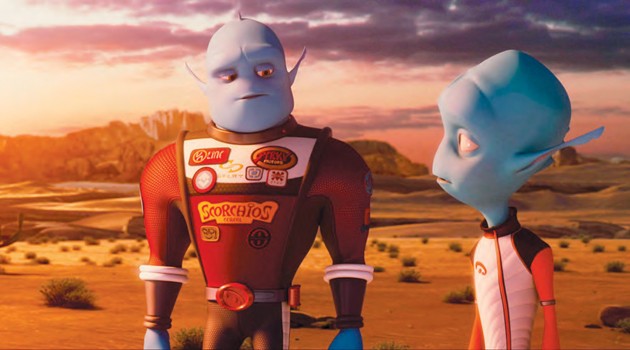 If “Monsters vs. Aliens” and “Space Chimps” got together and had a baby, it would probably be “Escape from Planet Earth.”

Like its metaphoric parents, it has smooth lines, slick animation and capable vocal cast, but occasionally struggles to engage viewers with a sometimes thin plot.

“Escape from Planet Earth” chiefly revolves around a set of alien brothers, Scorch (voiced by Brendan Fraser) and Gary (Rob Corddry) Supernova, whose constant bickering has caused problems at work, where Scorch is an astronaut and Gary works in mission control.

A particularly nasty spat leads Scorch to fire Gary (and Gary to quit) just as Scorch embarks on a dangerous mission to the Dark Planet — Earth. Without Gary’s help, Scorch is quickly captured and taken to New Mexico’s Area 51. Gary promptly goes after him, only to become captured himself by the ruthless General Shanker (voiced by William Shatner).

Shanker has been collecting aliens that excel in different areas to market their inventions and technology, such as social media, the search engine and smartphones. Among Shanker’s current workforce is Thurman (voiced by George Lopez), Io (voiced by Jane Lynch) and Doc (voiced by Craig Robinson).

Lately, though, he has been focusing their abilities on creating a “peace shield” that would allow him to destroy asteroids threatening Earth — except what he really wants is to be able to destroy planets at will, and he wants Gary to help him finish it. If Gary cooperates, Shanker says, both he and Scorch can go home, but if not, he will imprison them forever.

Back on Scorch and Gary’s home planet, Gary’s wife, Kira (voiced by Sarah Jessica Parker), and son, Kip (voiced by Jonathan Morgan Heit), have their own problems as they try to stop the boss of their planet’s space agency (Jessica Alba) from helping Shanker to rule the universe.

“Escape from Planet Earth” is pretty much harmless fun. Most of the humor is based on sight gags or the differences between alien and human life, and the adjustments the aliens have in coming to Earth. Younger kids in particular should like this, especially since, despite the lifeor- death stakes, there isn’t a lot of actual peril throughout.

Older kids and parents, though, probably won’t be especially enthralled. Most of the jokes don’t transcend ages or developmental levels. There are a few smart quips thrown in for the benefit of the chaperones, but it’s more bland than offensive. Which, really, is pretty disappointing, given the sleekness of the animation and general capability of the cast. Shatner slides right into his role, delivering his lines without his characteristic clipped dictation.

But even this anomaly can’t overcome the underdeveloped exploitation of the vocal talent. “Underdeveloped exploitation” basically could describe the whole movie. It’s a decent concept with decent resources that just don’t achieve their potential. But it’s February and there hasn’t really been a kids’ show since Christmas, so “Escape from Planet Earth” will probably come as an oasis for parents and kids, anyway.