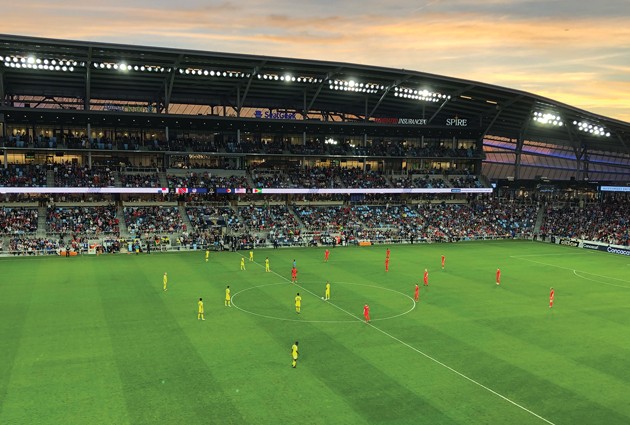 The Guyana and United States men’s national soccer teams kick off their Concacaf Gold Cup match at Allianz Field in St. Paul, Minnesota, on Tuesday. Transcript Bulletin sports editor Darren Vaughan is on vacation this week, but couldn’t resist the temptation to attend a sporting event or two anyway.

According to Google Maps, I’m currently 1,254 miles away from my desk at the Transcript Bulletin — a 19-hour commute that would make even the most seasoned veterans of state Route 36 traffic jams cringe.

I’m in Minnesota visiting my best friend from my college years, along with his wife and infant son for a few days. You would think on such a trip that sports would be the furthest thing from my mind — after all, it’s pretty much all I think about day after day. Most of my days include watching a game somewhere, so I should probably be burned out on it by now, right?

As it turns out, what a sports editor does when he or she is on vacation is watch more sports. And it’s not like I’m being dragged kicking and screaming to a stadium somewhere. I’m going completely willingly and with anticipation.

I arrived in the Twin Cities on Tuesday afternoon after flying in from Las Vegas. My friend Cameron picked me up from the airport, and then we met up with his coworker, Ryan, and Cameron’s father, Ian, and headed to the brand-new Allianz Field in downtown St. Paul to watch two games in the group stage of the Concacaf Gold Cup — the premier international soccer competition in North America. The first match was between Panama and Trinidad and Tobago, with the second pitting Guyana against the United States of America.

A generous serving of bratwurst and sauerkraut later, I was set to go.

Now, I’ve watched a lot of soccer in my life. I’ve been to Rio Tinto Stadium to watch Real Salt Lake. I’ve been to a Dutch Eredivisie match in Amsterdam. I’ve seen the U.S. men’s national team play South Korea in a friendly match.

But there’s something different about seeing the national team in a competitive match that means something — and the atmosphere in St. Paul reflected that.

It would have been nice to see the U.S. play a little better — OK, a lot better. They beat an overmatched Guyana team 4-0, but if they hadn’t spent a good chunk of the game looking generally disinterested, it would have been much, much more lopsided. There was a sizable amount of grumbling from the paying customers in the stands, wondering how in the world the U.S. can avoid another embarrassing loss to Mexico in the knockout stage.

But for a few hours, it was nice for me to go back to what made me fall in love with sports in the first place. For once,I didn’t have to watch a game from a purely analytical point of view, though some of that slipped in from time to time (old habits die hard). I was able to actually be a fan.