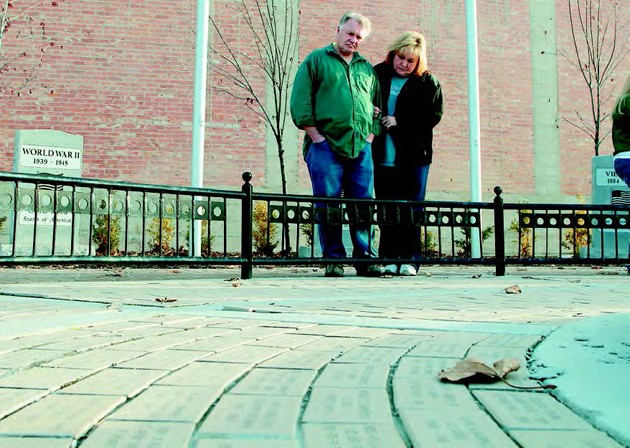 Vance and Sharron Smith look at names printed on bricks of soldiers killed in action at the Veterans Memorial Park before the Welcome Home Vietnam Veterans Day ceremony Wednesday night.

For the second year in a row, the Veterans of Foreign  Wars of Tooele County are hosting their Welcome Home Vietnam Veterans Day. This day is a celebration to honor not only those soldiers who fought in the Vietnam War, but also to honor any who have risked their lives for their country.

Each year, a special group of veterans is chosen to be specifically honored in a ceremony that is performed near the beginning of the event. This year, Korean War veterans will be honored specifically.

“Korean War veterans never got their welcome home day,” said Dennis Tracey, a member of the Veterans of Foreign Wars. “As a Vietnam veteran, our motto is, ‘Never again will one generation of veterans abandon another.’”

Though Welcome Home Vietnam Veterans Day is a federal holiday that normally takes place on March 29, this year’s event was postponed because of weather. Instead, Tracey said the group chose to hold the  event on April 30 because of its historical significance for veterans, especially those who fought in the Vietnam War. April 30, 2012 marks the 37th anniversary of the last Americans leaving Saigon, Vietnam, during the Vietnam War.

The event will begin with the commemoration and the honor- ing of the Korean veterans.

“We will start with the commemoration and then have the celebration,” Tracey said. “The event is supposed to be one of joy and not necessarily somberness.”

Veterans  of  all  wars  as  well as any families and community members who have a desire to attend are invited to come and enjoy live music and the supportive, patriotic atmosphere.

“We are making this family and community friendly,” Tracey said. “There will be no alcohol and we are hoping to see grand- parent veterans bringing their grandchildren to come down and meet their friends.”

The Veterans of Foreign War RV will also be at the event. Veterans of Foreign War officials will  be in the RV handing out information for both veterans and their families on benefits. Tracey said the idea is to make sure all local families that sacrifice a loved one for the sake of the country know the sort of honors and assistance they can qualify to receive, such as a military honor guard at a veteran’s funeral.

“There are too many times that low-income families of veterans don’t even know about these types of services,” said Tracey.

Last year, at the first-ever event, there were approximately 50 veterans and family members in attendance with only a little more than a day’s worth of notification. This year, Tracey is hop- ing there will be an even larger and more diverse crowd of veterans and supporters.

The Welcome Home Vietnam Veterans Day event will be held Monday at 6:30 p.m. at the Veterans Memorial Park in Tooele.