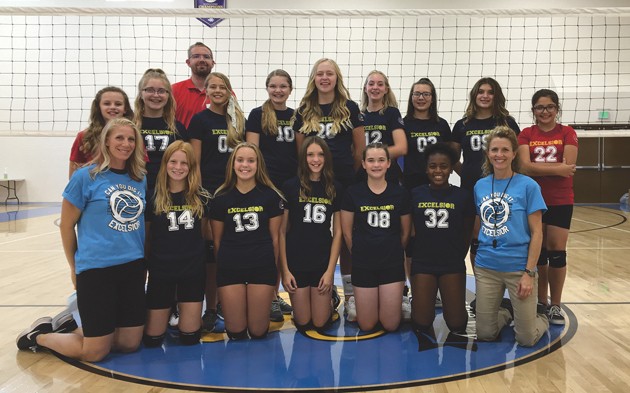 The Lions overpowered Summit Academy-Independence Campus of Bluffdale in the championship match, 25-17, 25-8. As the top-seeded team in the tournament, Excelsior won the right to host the match and celebrated its maiden title at home in front of its fans.

The Lions, coached by head coach Alyssa Boone and assistants Brock Camper and Heather Sharp, capped off a perfect 11-0 season with their victory in two sets.

“I’m so proud of them,” Camper said. “They came out hard and practiced hard all year. The girls definitely got what they deserved.”

“These girls have been amazing athletes from the beginning of the year,” Coach Boone said. “Their enthusiasm, confidence, and ability earned them the win. We had 40 girls try out, and we were able to choose the best 14, those who we felt were the most athletic, coachable and able to work together as a team.

“At the beginning of the year, the girls set two goals as a team: to make friends and get better at volleyball,” Boone continued. “They achieved both and were able to win a state championship, too!”

Coach Sharp echoed Boone’s words: “It’s been an honor to get to know these girls and see them become better athletes and good friends.”

Boone, who coached the Stansbury freshman team to a state title 10 years ago, is no stranger to volleyball, although she is only in her second year coaching volleyball at Excelsior. She led the boys’ volleyball team to a second-place finish last year.

The Lions dominated both games with their serving and passing as the Cubs struggled to return Excelsiors’ serves.

“Serving and passing win the games at our level,” Boone said. “Our girls excelled in both tonight.”

In the first set, eighth-grader Alexis Brown served out the game to win 25-17 while her sister. seventh-grade libero Abby Brown. scored the final four points of the second set after seventh-grader Jessica Sharp reeled off eight consecutive serves to close the game on a 12-0 run.

“It was a really exciting and nerve-wracking game!” Abby Brown concluded. “I was nervous and shaking a lot as I served the final points.”

“I was so happy to win that I cried,” Alexis Brown explained.

Eighth-grade setter Eliza Smith, who played on the team who finished second in the state last year, remarked, “This felt so much better than losing in the championship last year. Everyone on the team worked together, and we had great team chemistry.”

And Anaiya Rogers, also an eighth grader, simply added, “It was fun to win. I just love hitting the ball.”

Kelly Sciortino (eighth grade) lit up the crowd with two impressive kills during the match, and Zoe Carpenter played well at the net. Carpenter also had a crucial tip in the semifinal match to put the Lions over the top in the first set.

“All of our girls contributed to this championship,” Boone said. “Each member of this team worked hard. Those who weren’t on the court during our final game pushed the other girls during practice each day and kept them on their toes. Our girls never gave up this year, even when they were down.”

The Lions advanced to the finals with a 28-26, 25-19 victory over Summit Academy-Draper Campus in the semifinals.

Excelsior Academy Middle School Director Gichin Marsden congratulated the team on their victory after the game.

“These are great girls, and we have great coaches,” Marsden said. “It’s exciting to earn our first state volleyball championship. We love offering these extracurricular activities to our students.”

“We are so grateful that we were able to finish our season,” Coach Boone concluded. “We worried all season that it might be cut short or that our setter would be quarantined, but the girls worked hard to stay safe. They practiced with masks and followed all of the guidelines. We are happy to finish our season and to end with a state championship.”