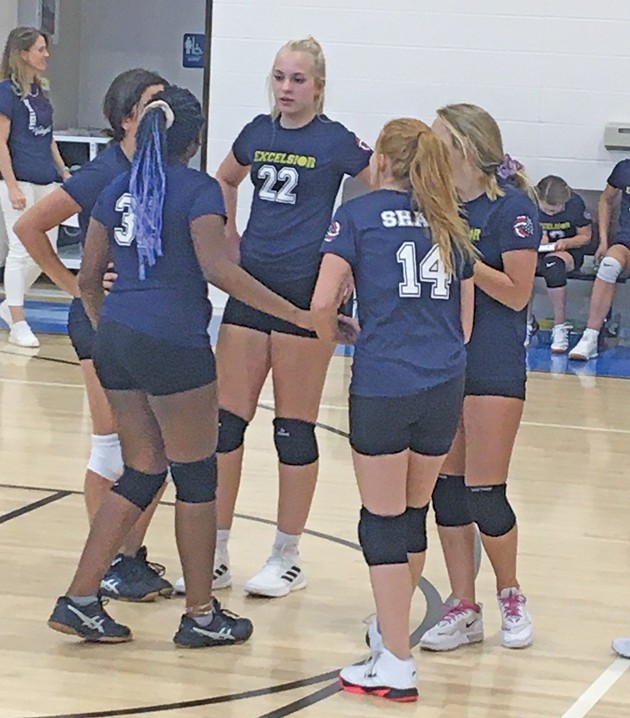 Excelsior volleyball players discuss strategy during a match. The team is undefeated so far this season.

As defending state champions in the Utah Charter and Small School Athletic League, the Excelsior volleyball team is looking strong with a 4-0 start on the season. With victories over Spectrum Academy, Wasatch Waldorf, APA West Valley and Monticello the Lions are headed into the second half of the regular season with a perfect record on the line. Over the next two weeks, they will complete regular season play and then be seeded for tournament play.

In their season opener at home on Sept. 7 against Wasatch Waldorf, Excelsior won 2-0, 25-23 and 25-17. In the opening game it took the Lions a few serves to adjust to Wasatch’s high underhand serves, but once they made the adjustments, strong serving and passing helped them bring home their first “W.”

The next day, they faced Monticello in West Valley in their most exciting game of the season.    The Lions started out slowly and fell in the first game 22-25. In the second game, Monticello jumped out to a 0-5 lead, and soon found themselves facing match point at 22-24. Coach Alyssa Boone recounted the exciting finish to the second game that the Lions ended up winning 26-24 to force a third and deciding game.

“The score was 22-24, match point” Coach Boone related. “Abby Brown made a diving save, and then Camaira Sacre bumped it up tight on the net. Meanwhile, Abby scooped herself up from her dive and pushed the ball over the top of the net for a side out and a complete turn of the game. With possession of the serve, Abby served three more for the win!”

“It was so exciting,” Boone added. “After the slow start and trailing for the entire game until it was tied at 24-24, the girls came back and got the win.”  Excelsior went on to win the third game 15-7 to take the match.

In their third game against American Preparatory Academy-West Valley on Sept. 13, the Lions came out strong behind the serving of Emma Yearby and Jessica Sharp to win the match 2-0 with identical scores of 25-10, 25-10.

The Lions traveled to Spectrum on Monday and will face Wasatch at home on Wednesday. A re-match against Monticello will be played in Erda on Monday, Sept. 27, and they will conclude their season on Wednesday, Sept.  29 at APA West Valley.