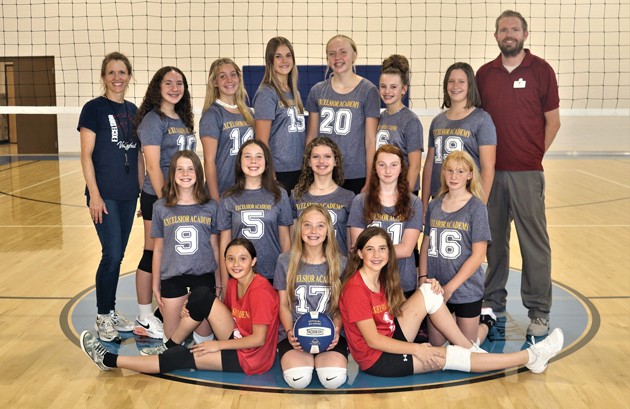 The Excelsior Academy Lions recently won their third-straight title as members of the Utah Charter and Small Schools Athletic League.

For the third year in a row, the Excelsior Lions, coached by Alyssa Boone and Brock Camper, reached the State Volleyball Championship match in the Utah Charter and Small Schools Athletic League. Although the Lions lost an extremely close match to Monticello Academy 25-18, 23-25, and 13-15 and finished second, they played an amazing season of volleyball, going undefeated up until the championship game.

With only one returning player from the 2022 championship team, the Lions “worked together as a team with everyone contributing” and “defense and hustle abounded.” Coach Boone shared after the match that it took a team effort to win the game.

“The girls did an incredible job playing as a team and putting their best effort on the court for every play,” she said. They stayed focused on playing our game — a bump, set, hit game that demonstrated to everyone in attendance, the skill level of our team.”

She continued, “I can say I am proud of what we accomplished and feel extremely confident that these girls will go on to other teams with a good skill set, and most importantly, with a love of the sport of volleyball.”

As the only middle school volleyball program in the county, Excelsior develops players who can be found contributing on the rosters of all three area high schools: Tooele, Stansbury and Grantsville.  Many alumni returned to attend the championship game Friday to support the program and cheer on their former teammates and coaches.

The last three years Excelsior’s girls’ teams have gone 32-1 and won two consecutive championships along with their second place finish this year.  The boys’ teams, also coached by Boone and Camper, are 20-5 over the past two years.

In the championship match, strong-serving runs and spot-on passing gave the Lions the big win 25-18 in Game 1. Camaira Sacre was 100% behind the line, with eleven serves and six aces. With Excelsior narrowly leading 14-13, Tenison Cox went on a big serving run, putting up eight straight points. In all, Cox made 11/13 serves in the match.

Set 2 was an uphill battle for Excelsior, reminiscent of Game 2 against Wasatch in the semifinals the day before.

Coach Boone explained, “We took a big dip and found ourselves behind, 7-14. Sacre punched out some tough serves, narrowing Monticello’s lead to 19-15, but we couldn’t answer their left handed server who found the back line of our court several times, increasing their lead to 22-17. Ultimately, Madelyn Flygare served a run to bring us to 23-23, but the team ultimately fell short, and lost 23-25.”

Game three was tight from the beginning with the Excelsior taking the biggest lead of the game at 7-4.  Monticello tied the game at 9-9 before taking a 9-10 lead. The score teetered back and forth with ties at 10-10, 12-12, and 13-13 before Monticello scored the last two points to win the match and the championship, 13-15. Reagan Shields and Searle each contributed 100% serving, 6/6 and 7/7 respectively.

Beard tallied 11 perfect passes, Flygare-13, Sacre-12, and Shields-3. Libero Julie Brown helped the team with defensive plays in the back court along with Addi Farnsworth.

Excelsior had to play a tough Wasatch Academy team in the semifinals Thursday, October 6. They won the first set 25-16 and then lost the second 23-25 after fighting back from a 10-point deficit at the beginning of Game 2.

In the final set they prevailed 15-11, punching their ticket to the championship game.

In the semifinal, Cox hit 13 out of 15 serves in the court with six aces while Sacre and Flygare were both perfect servers going 8/8. Searle added 6/6 serving and topped the  passing charts with 12 perfect service receptions and nine digs.

Sacre added 12 perfect passes from the back row and set well leading to hitting and attacking at the net. Flygare tallied 10 perfect passes with Beard adding six and Cox and Shields five apiece.