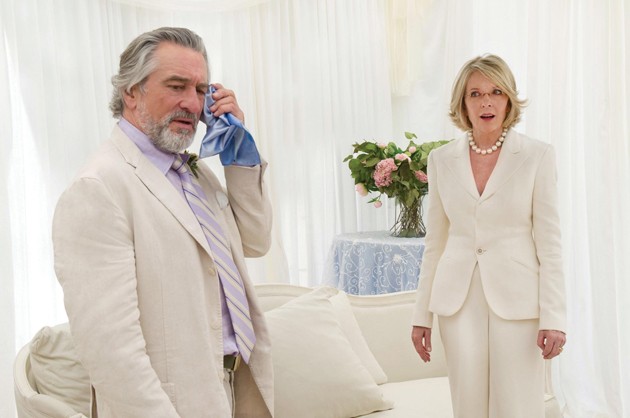 Robert De Niro and Diane Keaton star as a divorced couple forced to pretend they are still happily married for a weekend in “The Big Wedding.” courtesy Lionsgate Pictures

April 25, 2013
Except for a few moments, ‘The Big Wedding’ wears thin really fast

My sister is getting married this summer, so for the past couple of months, I have been inundated with links to wedding blogs and planning guides. I thought it was pretty much the worst thing ever.

Then I saw this movie, and realized just how awesome and happy this wedding will be compared to the one shown on screen.

“The Big Wedding” refers to the pending nuptials between Missy (Amanda Seyfried) and Alejandro (Ben Barnes). Missy’s family is in turmoil because her father is being investigated for stock fraud, but that’s nothing compared to the chaos that descends upon Alejandro’s adoptive family when he learns his birth mother, Madonna (Patricia Rae), will be coming from Colombia for the wedding.

Although his adoptive parents, Ellie (Diane Keaton), and Don (Robert De Niro), have been separated for eight years — and Don has been living with Bebe (Susan Sarandon) during that time — Alejandro asks them to pretend to be married again for the weekend, as to not offend the staunchly Catholic Madonna.

As you can imagine, this does not go off without a hitch. Bebe is gravely offended, which is problematic for several reasons, including the fact that she is catering the shindig. Ellie and Don are apparently still seeking some closure from their marriage, which was ruined by Don’s affair with Bebe, who was Ellie’s best friend.

Don and Ellie’s birth children have their own troubles. The daddy issues Lyla (Katherine Heigl) harbors from her parents’ split are trumped only by her marital problems. Meanwhile, Jared (Topher Grace), who has been “saving himself” for true love, finds himself gravely tempted by Alejandro’s birth sister, Nuria (Ana Ayora). Oh, and Robin Williams is a drunk priest.

There are some nice moments in here. Lyla and Don have a couple of good daddy-daughter moments that felt natural and compelling. Alejandro and Madonna likewise have a brief moment. Missy and Alejandro are a pretty convincing couple, considering the rest of the material. Oh, and it’s only 90 minutes. And that is literally all I can think of that is good to say about this movie.

Unless you like what felt kind of like an unholy amalgamation of “Meet the Fockers” and “Bride Wars” with a dash of “Something’s Gotta Give,” you might have better things to say about “The Big Wedding.”

This is billed as a comedy, but an apparent dearth of clever jokes amidst the flood of sight- and sex-based gags, made it feel cheap on the whole and wore thin really fast. Some of the dialogue sounds improved, which I think was supposed to make it sound more natural but, given the rest of the movie, kind of just feels unfinished. Oh, and viewer be warned: when it says rated R for sexual content, it ain’t kidding around.

I know that Keaton, De Niro and Sarandon have all had their duds, but generally speaking, they all usually have pretty good flicks. Maybe the three of them together just counteracted any taste they might have had otherwise, I don’t know. Seyfried, though, has also had some pretty solid hits, and Heigl doesn’t often have serious bombs. And Williams? What were all these people thinking?

Topher Grace makes sense, though. It’s been a while since “That 70s Show” ended and “Spider-Man 3” and “Win A Date With Tad Hamilton” didn’t exactly kick his career into the fast lane. I guess he’s shooting for a kind of Mila Kunis transformation, but even though both of them seem to be chronically whiny characters, the difference is Kunis is cuter when she does it.

Compared to this, my sister’s wedding can hardly be more of a train wreck. At least, it better be. Otherwise, I’m totally bailing. Sorry, sis.