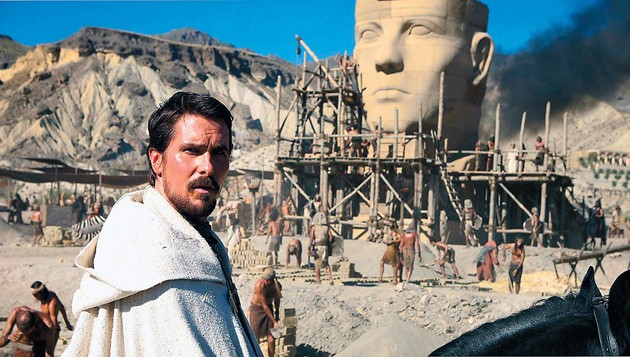 Christian Bale stars as Moses in “Exodus: Gods and Kings,” a retelling of the Biblical story that pits an ousted general and a few hundred thousand slaves — and god — against the Egyptian army. image courtesy 20th Century Fox

December 11, 2014
‘Exodus: Gods and Kings’ could have been more than middle of the road

I wonder who it was who looked at the Bible, then at a poster for “Newsies,” then back at the Bible, and was like, “Oh my gosh, guys, great idea.”

And, actually, casting Christian Bale as Moses in “Exodus: Gods and Kings” wasn’t a bad idea. But some choices throughout the rest of the film could have used some second thoughts.

In “Exodus,” Moses wasn’t just raised in the palace, he was the most trusted general to the pharaoh (John Turturro) and raised alongside the prince, Ramses (Joel Edgerton), far from the thousands of enslaved Hebrews building the Egyptians’ monuments.

But on a trip down to inspect the slave operation, Moses calls out a crooked overseer (Ben Mendelsohn), who gets even by telling Ramses, who is now the pharaoh, that Moses is actually Hebrew. Gasp!

After a series of confusing events, Moses is banished and eventually finds his way across the Red Sea and into a sheep-herding village — and into the heart of Zipporah (Maria Valverde). They marry and have children, all the while him concealing his past and denying both the God of the Hebrews and the deities of the Egyptians. But on a dark and stormy night, Moses chases some wayward sheep, and is visited by God, who comes in the form of a creepy little kid who stands beside a burning bush.

The kid tells Moses to go back to Egypt and free the Hebrews. Much to the dismay of his wife and son, off he goes, back to the land of his fathers. When asking Ramses nicely to free the Hebrews doesn’t work, he elicits the help of Nun (Ben Kingsley), Joshua (Aaron Paul) and Aaron (Andrew Tarbet) to whip the Hebrews into fighting shape.

They stage a bunch of guerilla attacks on the Egyptians, prompting Ramses to make life even worse for the enslaved population. But the ground they gain by sabotaging supply lines and such isn’t fast enough for God; the kid reappears and tells Moses he’s going to take matters into his own hands.

The disease and pestilence are matched only by Ramses’ insistence on not freeing the Hebrews, but then things do get so bad he acquiesces, only to change his mind and sets out to slaughter the whole bunch of them.

Much like its source material, “Exodus” is long and  confusing. I realize it’s a lot of story to tell in not a lot of time, but director Ridley Scott does his darndest to cram every turn of events and then some into two and a half hours.

Consequently, it drags on and then feels rushed, and some of the exposition was blazed through so quickly that I missed it entirely. Like, “Oh, they’re going to fight some people now, so those must be bad people for some reason. Or, oh, they’ve thrown Moses in prison for some reason, but it was probably a good reason.” Or, near the end, “Oh, some people are dancing like crazies around something and Moses’ hair is a lot longer so we must be a few years in the future, so that’s probably the golden calf, huh.”

On a related note, Sigourney Weaver is in this movie. I don’t exactly know why, and I’m pretty sure she only has one line. She mostly just sulks around in the background for the first quarter of the movie, I guess trying not to smudge her eyeliner or bronzer. Which, actually goes for most of the rest of the white people trying to play Egyptians.

“Exodus” has come under fire for casting a bunch of, let’s face it, pretty white people in its leads. The film’s creators, however, argue against claims of racism by pointing out the dozens of people of Middle-Eastern descent in non-headlining roles. Putting bone structure and marketability ahead of racial accuracy has been Hollywood’s trick for years, even in Biblical movies — just look at Charlton Heston, or virtually anyone who plays Jesus.

In this case, the white people they loaded up with bronzer and fake tans to look Egyptian were sometimes distracting. I just kept thinking, “Sigourney, honey, that is not your color,” and “Skeevy guy (Mendelsohn), just go wash your face real quick, please.” In that way, casting actual people of Middle-Eastern descent made the Caucasian casting more obvious.

The effects are certainly impressive, however, and the wall of water in the Red Sea was cooler than any effects I’ve seen since “Interstellar.” Scott really tries to mesh phenomena regarded as miracles and curses with science, particularly in the case of the plagues, and the outcome manages to give a little more skeptical weight to the Biblical story without losing the feel of divine intervention.

Moses’ character, as a man prepared through improbable circumstances solely to lead after having a complete reversal of faith, is an interesting humanization of the Old Testament prophet, which might be enough to overshadow the creative liberties taken with the story.

With a budget like “Exodus” had, the resources available for movie making today and the talent involved with this film, it really should have been better. Overall, it depends on how you weigh qualities and deficiencies in movies. But I found “Exodus” squarely middle of the road. It wasn’t spectacular, but I’ve seen much, much worse.