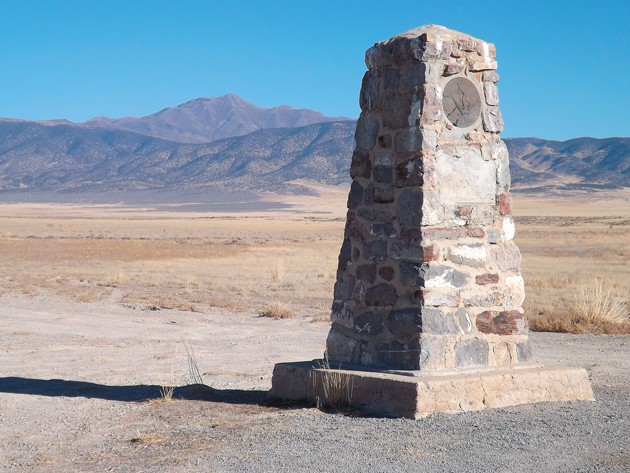 The 100-mile stretch of the original Pony Express Trail through Tooele and Juab counties looks much the same as it did when the trail operated from 1860-61. Pictured is the Rush Valley Station marker between Faust and Five Mile Pass. Lewiston Peak and the Oquirrh Mountains are in the background. (photo courtesy Jaromy Jessop)

“The mind tells the man that boldness is required and thus gives direction to his will.”

Over 100 miles of the Pony Express National Historic Trail exists in Tooele and Juab counties in Utah’s West Desert.

This stretch of the Pony Express Trail is both historically significant and a unique national treasure. It is desolate, open and untarnished by urban sprawl, mining or agriculture. It also doesn’t have an interstate or giant windmills nearby, like in Kansas, Nebraska and Wyoming.

How much longer the trail there remains in that condition is hard to say as solar power and new innovations make harsh environments habitable. Even now, a subdivision grows larger near Vernon along the trail, and from Simpson Springs you can see elements of Dugway Proving Ground sprawling across the desert to the north.

Yet, a traveler can still experience some of what early explorers, like George Chorpenning, Howard Egan and Capt. James H. Simpson did when they first followed the route in the 1850s.

This column’s source document is the book “City of the Saints: Among the Mormons and across the Rocky Mountains to California” by Sir Richard Burton. In the late 1800s, Burton was one of the most famous explorers and scholars of his day who sought out fascinating lands in the Middle East, Africa and Asia to write about.

The “Great American Desert,” which is what our desert was called back then, also caught Burton’s attention. The book details his journey across the plains along the Oregon Trail, through Salt Lake City and Camp Floyd, and then on the Pony Express Trail in 1860. His book is significant because his journey was taken at the height of the Pony Express Trail, which existed from 1860-61.

Burton is an excellent writer and his noted experiences are interesting, fun and easy to read. By virtue of his fame, which was considerable, he was able to meet with Brigham Young, Porter Rockwell and the officers at Camp Floyd. Burton describes the desert, mountains, encounters with Indians, the Mormons, and early pioneers such as Henry Jacob Faust.

He also describes his stops at Pony Express Trail stations in the West Desert, such as Meadow Creek, Simpson Springs, Dugway, Fish Springs, Willow Creek and finally Deep Creek. The book provides a fascinating window back to that distant time. You can find it at most Utah libraries and it was apparently reprinted in 2003 so you can pick up a cheap used copy on Amazon for as little as $5. The book is a must for anyone who loves the trail and intends to explore it.

What was the Pony Express and how did it come about? In 1860 the United States was in turmoil. The question of free vs. slave states was about to rip the nation apart while the largest military force in the country was kicking around in Utah’s dust at Camp Floyd.

Due to the gold rush in California and the never-ending stream of emigrants to Oregon, those areas grew in strategic importance. Also, because of the Mormon dilemma, and the bulk of the Army in Utah, communication between Washington D.C. and the West Coast had to be maintained.

However, it took 6-8 weeks for a letter to get from the East Coast to the West Coast. Command and control of any situation is difficult if not impossible when your communication is slow. The going joke of the day was that people on the East Coast would forget about events and news stories before the West Coast even heard of them.

The situation had to be fixed so Russell, Majors and Waddell, a firm that was operating freight and a daily stage from Kansas City to Salt Lake City, came up with the Pony Express. The firm sold the federal government on the idea they could get a message from St. Joseph, Missouri to Sacramento, California in just 10 days. This was better than six weeks, so the government agreed and on April 3, 1860, the first riders headed east and west from Sacramento and St. Joseph, respectively.

The Pony Express route covered an incredible distance of nearly 2,000 miles. Along the route the riders had to contend with raiding American Indians, prairie thunderstorms, blizzards, dry desert wastes and the gigantic barrier of the Sierra Nevada mountains in California.

The company wanted riders who were unattached, going so far as exclaiming “Orphans were Preferred” on job advertisements, because there was high probability for riders to meet personal disaster along the dangerous route. The company also wanted smaller riders, preferably weighing no more than 125 pounds, presumably so the horses could go faster.

Each rider received a salary of $25 per week and was issued two revolvers, a rifle, a bowie knife and a Bible. Most riders found this gear to be too cumbersome and left the rifle behind.

Prior to accepting employment, these men were presented with the aforementioned bible and required to take the following oath upon it: “I (name of rider) hereby swear before the Great and living God that during my engagement, and while I am an employee of Russell, Majors and Waddell, I will under no circumstances use profane language, that I will drink no intoxicating liquors, and that I will not quarrel or fight with other employees of the firm, and that in every respect will conduct myself honestly, be faithful to my duties, and so direct all my acts to win the confidence of my employers. So help me God.”

At the outset of this endeavor there were 80 riders, 500 horses, 190 stations and 400 station men and assistants. The horses were mostly California Mustangs that were speedy and well adapted to the rough terrain and deprivations they would suffer. Stations were spaced out every 10-12 miles and each rider would complete a 75-100 mile leg and then would be relieved by a different rider. Riders would swap mounts as necessary along the route and the mail bag, or “mochila” as it was called, would be checked for security at each station stop.

The route in western Utah was infested with hostile American Indians who did not appreciate the invasion of their lands and the destruction of their way of life that continued encroachment by white men represented.

Riders had to constantly be alert and ready to react to an ambush, especially at choke points in Tooele County, such as Lookout Pass, Dugway Pass and Deep Creek (Overland) Canyon. American Indians made constant trouble for the Pony Express and Overland Stage, burning stations, killing attendants and plundering any stores they could. Troops of mounted dragoons were continually dispatched from Camp Floyd along the trail to confront trouble, protect personnel and property, and simply keep the route open.

The cost of sending mail was extraordinary at $5 per ounce. Even at that price the venture was a failure from an economic standpoint but it is credited with keeping California in the Union as the Civil War broke out and it continues to capture the imagination of our nation over 156 years later. The Pony Express ceased operations abruptly on Oct. 26, 1861, which is the day the Transcontinental Telegraph wires were connected in Salt Lake City, which rendered the Pony Express instantly obsolete.

To safely explore the trail in Tooele and Juab counties today still requires planning, which I will cover in next week’s column.