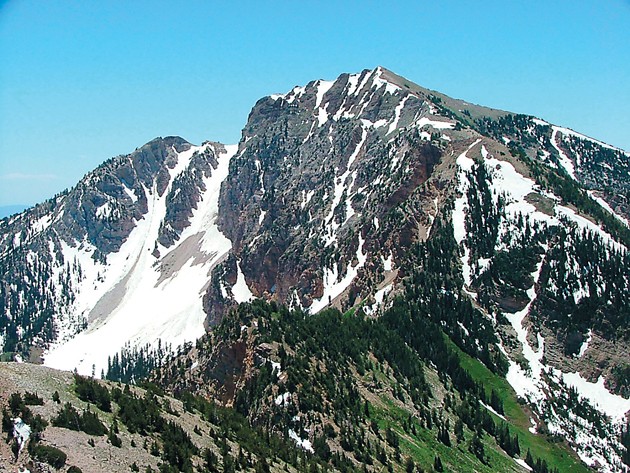 Deseret Peak as seen from high on Stansbury Peak looking south at the peak.

“None know how often the hand of God is seen in a wilderness, but them that rove it for a man’s life.”

Deseret Peak at 11,031 feet high is the magnificent crown jewel of the Stansbury Mountain range and it is the centerpiece of the Deseret Peak Wilderness Area.

Most people in Tooele County are familiar with this mountain, but I expect not all are aware of how unique and wonderful it is.

The Deseret Peak Wilderness Area was established by Congress on September 18, 1984, with the passage of Public Law 98-428: The Utah Wilderness Act. The wilderness area consists of approximately 25,000 acres and it is dominated by bold escarpments, forested north-east facing exposures and numerous peaks over 9,000 feet in elevation.

The DPWA is part of the 106 million-acre National Wilderness Preservation System. This system was established by Congress in the Wilderness Act of 1964 in order to secure for the American people and future generations the benefits of an enduring resource of wilderness.

DPWA’s boundaries are roughly Pass Canyon/North Willow Canyon on the north; the Stansbury Front Trail — Forest Trail 031 on the east; Vickory Mountain Summit on the south; and Skull Valley on the west.

Most of the higher elevations are alpine in character with true tundra occurring near the summits of the highest peaks. DPWA’s elevation ranges from 5,000 feet at the canyon mouths on the Skull Valley side of the range, to the top of Deseret Peak at 11,031 feet.

Summer temperatures in these varied elevations can range from over 100 degrees at the lowest elevations during the day, to as low as 40 degrees or even freezing at night up on the windswept peaks.

The Stansbury range in the vicinity of the wilderness area, and as a whole, is a classic “Basin and Range” uplift characterized by extreme, nearly vertical uplift on the eastern face of the range, and by more gradual slopes on the west side.

Glaciation played a role in this wilderness during the last several ice ages, carving cirques in Dry Lake Fork and Mill Fork of South Willow Canyon, and to a lesser extent, at the head of Pole Creek Canyon and Big Creek Canyon on the west side of the range.

It is a strange thing to climb one of these barren ridges and then be met by dense evergreen forest just over the crest. It is all due to the angle of the sun in this classic basin and range system. The northeast facing slopes receive the least sunlight and heat, therefore they are cooler, shaded and more conducive to big trees.

There are also lush, thick stands of quaking aspen that turn golden in the fall. Box Elder, water birch and cottonwood choke the canyon bottoms in the lower elevations. In the highest elevations, Engelmann spruce and sub-alpine fir fill the glacier carved bowls and cling to the highest ridges, often reduced to the form of banner trees and krummholz — twisted by the wind into grotesque mutations. On high windswept ridges you will find limber pine and even a few small groups of the ancient bristlecone pine. Water is scarce on the wilderness with few dependable perennial streams.

South Willow Lake is situated at the base of the 1,300 foot-high escarpment of 10,685 foot-high Stansbury Peak. This is a true lake of several acres in size and a probable depth of 25-50 feet. It is a snow fed lake and in most years if you visit it, there will be snow slides terminating in it and old drifts on the west shore into mid July. Its eastern boundary is a series of grassy moraines left behind by a Pleistocene glacier that once clung to the mountain here. A stream issues from its southeast corner and tumbles down Mining Fork of South Willow Canyon.

North Willow Lake, which many people call nothing more than a large pond, is situated below the 1,500 foot-high escarpment of 10,521 foot-high North Willow Peak. This tiny lake is snow fed as well. It is in a beautiful setting perched high above Tooele Valley with commanding views of the Grantsville area and the Great Salt Lake beyond.

This clear pool is probably no more than 5-10 feet deep and no more than an acre or two in size. There are a few conifers here and there around its shore with numerous water loving plants surrounding it. As with South Willow Lake, the cliff walls that immediately rise vertically to the west by more than 1,000 feet are incredible. A stream issues from its eastern side and tumbles down left fork of North Willow Canyon. This area is snowbound until mid-June most years.

This fantastic wilderness is just a stone’s throw away from the majority of the population of Tooele County, so take advantage of it but remember the words of Teddy Roosevelt “Leave it as it is… the ages have been at work on it and man can only mar it.” It is our duty to ensure that we practice “No Trace” visiting techniques so that this resource will be as vibrant and beautiful for future generations to enjoy.

The best access to the wilderness area is via South Willow Canyon and the Loop Campground Trailhead. Deseret Peak, Stansbury Peak and the Willow Lakes can be reached from trails that begin here. To get to the Loop Campground Trailhead, follow state Route 138 into Grantsville, and turn south onto West Street and follow the road, also known as the “Mormon Trail” approximately five miles to where a signed road heads southwest towards the mountains. This is the South Willow Canyon Road. Follow the road, which is passable for most vehicles, west to its end in the mountains and you will arrive at the Loop Campground.

In next week’s article, I will describe an unusual route to the summit of Deseret Peak from this point in detail. There are, however, many other worthy destinations in the range. Get in your vehicle and go check it out. This is the best time of year for it.

Jessop grew up exploring the mountains and deserts of Utah. He has a bachelor’s degree in Geography from the University of Utah, and has traveled to all 50 states, U.S. Territories and a dozen foreign countries. He, his wife and daughter live in Stansbury Park. Follow him on FB (JD Jessop) for more hikes and travels.