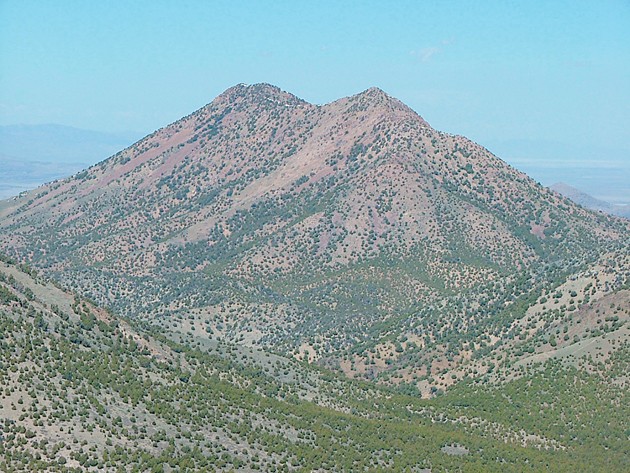 The Simpson Mountains are unusual, but beautiful to visit.

The Simpson Mountains are some of the most unusual mountains found within Utah’s West Desert. The range was named in honor of U.S. Army topographical engineer Capt. James Harvey Simpson.

Captain Simpson explored the area in 1858 and 1859 while searching for the most practicable wagon route from Camp Floyd to Carson Valley, Nevada. It is important to note however that this area was very familiar to Chorpenning and Major Howard Egan as early as the early 1850’s.

To reiterate this point Sir Richard Burton while stopping at Simpson Springs in the summer of 1860 states that “After 17 miles beyond the pass (Lookout Pass) we reached the station which Mormons call Egan’s, Anti-Mormons call Simpson’s Springs, and Gentiles Lost Springs.”

It seems as though the name Simpson won out in this competition that interestingly enough, Capt. Simpson had no part. When he first gazed upon the range, he gave them an altogether different name. He wrote, “This spring (Simpson’s Springs) is on the base and north side of some mountains, which I call after Capt. Stephen Champlin, of the United States Navy.”

Persons traveling the Pony Express National Historic Trail usually make a worthwhile stop at Simpson’s Springs and then speed towards the next stop on the trail. If these same individuals knew about some of the significant history of these mountains, with even stranger green colored rocks that rise behind the station to the south and east, they would stay longer and investigate.

The Simpson Range is peculiar in that it does not trend primarily north to south, or east to west. Rather, it stands somewhat alone in a fortress-like arrangement, separated from the Sheeprock Mountains to the east by Porter Valley and Erickson Pass, and from Keg Mountain to the west by the Old River Bed. To the south of the range lies the grisly expanse of the Sevier Desert, with treeless, sand blasted Desert Mountain plainly visible from the summits of the Simpsons.

To the north is Davis Mountain and Skull Valley. The range measures approximately 12 miles wide from the area of Bennion Ranch in the west to the Government Creek/Erickson Pass road in the east. They are approximately 20 miles long from Simpson Point in the north to Desert Springs in the south.

The Northern Simpson Range contains the range’s highest peaks, which are the dual summits of Indian Peaks at 8,402 feet in the north and 8,410 feet a bit farther south along the summit ridge. The Indian Peaks are visible and somewhat imposing as you travel south along Skull Valley Road towards the junction with state Route 199 near Dugway. From this vantage point, the Indian Peaks look like a large volcanic cone to the southwest rising up behind Davis Mountain.

Due to the geology of the Northern Simpson Range, there is a multitude of different colors of rock that one will encounter from quartzitic sandstones to brick red. The majority of the Indian Peaks stock is made up of Tintic Quartzite and has weathered to dark shades of brown, red, and purple. The red appearance of Indian Peaks is most notable along the Government Creek Road in the vicinity of Tom’s Spring on the southeast flank of the mountain.

The water table in the Simpson Mountains is surprisingly high and several streams have respectable flows year round considering the location of the range. This was problematic for historical mining operations that encountered water at a very shallow depth. Historically, the small mining town of Indian Springs, the mines in Death Canyon, and cattle and sheep outfits made use of the abundant water. Emigrants were fond of camping at the mouth of Indian Canyon because of the clean, plentiful water, even though this was five miles south of Simpson’s Springs and a bit off the Overland Trail.

The area is rich in history and folklore as The Pony Express, Overland Stage, and first Trans-Continental Telegraph line skirted the northern end of the range. Orrin Porter Rockwell made his residence for some time on Government Creek on the eastern side of the range. During the 19th, and 20th centuries, great herds of sheep passed this way from time to time on their way to the shearing pens at Jericho and Tintic. Horse thieves, renegades and deserters from the Army at Camp Floyd made their hideouts in the Simpson range and nearby Keg Mountain.

Before all of this colorful history though, pre-historic Native Americans lived in the area, especially near the Old River Bed as early as 5,000 to10,000 years ago. In some areas of the range, ancient petroglyphs can be found on the rocks.

I think of the Simpson Range as the epitome of the Wild West. There is the wild terrain and historical events, tumbleweeds that blow across the dirt road in front of you as you travel, and the animals, such as wild Mustangs and Pronghorn Antelope.

It is a dry, rugged and inhospitable area in the summer time and it gets darn cold and snow covered in the winter. Make no mistake about it: If you venture into this area, you must be prepared with plenty of food and water. The roads on the periphery of the range, such as the Pony Express Trail in the north, Erickson Pass Road in the east, and Death Canyon Road in the west, are fairly decent roads. But if you venture further into the range, you need to have a 4X4 vehicle and a good spare tire.

In next week’s article, I will describe a few possibilities for adventure in the Simpson Mountains and in particular, the strange and almost magical beauty of the high West Desert Mountain Ranges of Tooele County, Utah.