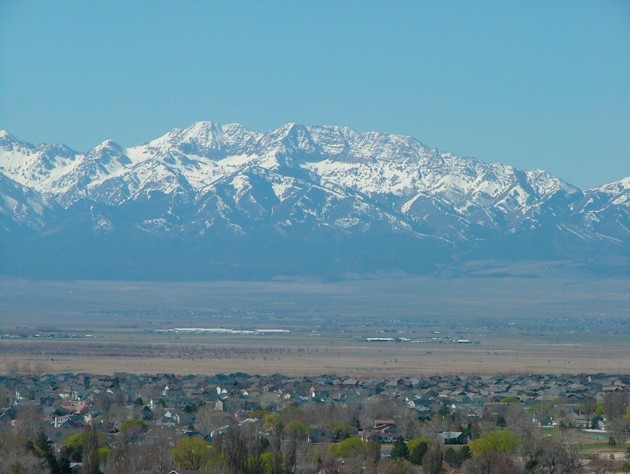 Adobe Rock with the Great Salt Lake and Stansbury Island in the distance to the North West.

April 24, 2014
Explore in the footsteps of Capt. Stansbury

“America was not built on fear. America was built on courage, imagination and an unbeatable determination to do the job at hand.”

n last week’s article, I introduced you to Capt. Howard Stansbury of the U.S. Corps of Topographical Engineers – U.S. Army. No one better exemplifies Truman’s quote above about dedication to duty and mission accomplishment, despite all hazards, than Capt. Stansbury.

Many well-known geographic features and locations are named after this great man. Let’s continue to look at his explorations of the Great Salt Lake and its environs.

Stansbury gave a great description of Antelope Island in 1849 when he visited it:

“Antelope Island is the largest of the islands in the lake. It is about 16 miles in length and about 5 miles in width at its broadest part. Like all the other islands in the lake and indeed, all the prominences observed west of the Wahsatch Range and within its valley, it consists of a long, rocky eminence, ranging from north to south rising abruptly from the water and attaining an elevation of about 3,000 feet above the elevation of the lake. A party was sent up the mountain to erect a triangulation station on its highest peak. The officer charged with that duty describes the view from this elevation as grand and magnificent, embracing the whole lake, the islands, and the encircling mountains covered with snow — a superb picture set in a framework of silver.”

Antelope Island is now a Utah State Park and you can visit it and follow the three mile Frary Peak Trail to the same spot on top of the island and see the view previously described. Stansbury also gave quite a description of the island that bears his name farther to the west – Stansbury Island:

“This is the second island in point of size in the lake. It is at this time in fact a peninsula, the space between it and the mainland, which formerly was occupied by the water, being now occupied by a broad level plain of sand, thickly overgrown in places by artemsia. Peak towers upon peak and cliff beyond cliff in lofty magnificence, while crowning the summit the “Dome” frowns in gloomy solitude upon a varied scene of bright waters, scattered verdure, and boundless plains of arid desolation below.”

What a wild, lonely, bleak, yet beautiful and unknown place the Great Salt Lake must have been back in those days when Stansbury sailed upon it. The expedition also pushed deep into the Great Salt Lake Desert, exploring where they all nearly perished and, just like the Donner Party, were guided by Pilot Peak and saved by the waters at Donner Springs.

Stansbury’s descriptions of his travels are marvelous. He talks of thousands upon thousands of pelicans and other birds nesting on the islands of the Great Salt Lake, stealthy Indians tracking the party across the salt flats, the vast flat white solid sheets of salt that had all the likeness of ice and would easily support the weight of the entire train.

His descriptions also included privations suffered by his men and animals as they slogged through knee deep salt mud for miles without food or water, how the salt desert came alive by the light of the full moon, and of the destruction of property created by emigrant wagon trains abandoning all manner of items such as books, furniture, tools, clothing etc., so that the wagons would become lighter and attain passage through the salt muck.

Stansbury eventually came onto Fremont’s old trail and camped at the western base of Hastings Pass where he and his men awoke to several inches of fresh snow the next morning. Stansbury crossed Hastings Pass and had to travel south from that point in Skull Valley for many miles in order to find dry passage across the sloughs of Skull Valley.

As the expedition moved north and rounded the point of the Stansbury Range, he commented on the incredible cliffs in the area of Burnt Springs. He also noted Lone Rock and surmised that a small force of cavalry could defend it against almost any number of Indians for quite some time.

He mentioned thousands of tiny fish in the warm waters of Big Springs, which you can still see there today, and he also talked about the “malodorous stench of the foul swamps.” Apparently he was not impressed by what we now call “Lake Stink.” Stansbury and his men camped along Willow Creek in the vicinity of present-day Grantsville, and he stated that a terrible wind came up in the middle of the night and scattered their fires and nearly burned them all in their blankets.

Eventually the party returned to Salt Lake City and waited out the winter in the company of the Mormons. Stansbury and his men got along well with the Mormons and even assisted them with battling Indians in the vicinity of Utah Lake.

A few interesting side notes about the expedition are the fact that Stansbury’s assistant, Lt. John Williams Gunnison, wrote a book on the Mormons that became quite famous during the time entitled, “The Mormons or Latter-Day Saints, in the Valley of the Great Salt Lake: A History of Their Rise and Progress, Peculiar Doctrines, Present Condition.”

Gunnison returned to Utah in 1853 on an expedition for a route for the Trans Continental Railroad. He and his party were massacred by Indians on the banks of the Sevier River west of present-day Delta.

Of particular interest to people living in Tooele Valley near Stansbury Park is a rocky prominence next to state Route 36 about three miles south of Interstate 80 called “Adobe Rock.” It is named so because Stansbury had an adobe lean-to constructed just west of the rock.

Stansbury told of one time when he stayed at Adobe Rock in the structure overnight while checking on the government stock pastured nearby. During the night, a snowstorm came up and the snow drifted right through the window of the structure and covered him quite completely making for a miserable night.

So now you know a bit about from where the Stansbury Mountains got their name. Capt. Stansbury was a man among men. A professional engineer and soldier, a true explorer of the first order and one of many great trail blazers and pioneers who conquered the old west.

Stansbury was eventually promoted to major and died in 1863 from what was reported as complications relating to disease contracted while exploring the Rocky Mountains. Stansbury’s published account of his explorations, “An expedition to the valley of the Great Salt Lake of Utah,” is in the public domain and can be downloaded for free from the Internet. It is also on the shelf of most Utah libraries. This book is a fascinating read and well worth your time. Check it out and then