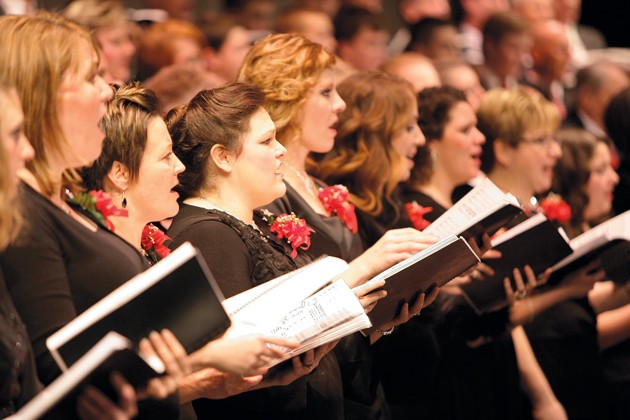 The Tooele Community Chorus and Orchestra will perform Handel’s “Messiah” this Sunday at Grantsville High School. This will be the chorus and orchestra’s 32nd year performing the oratorio that tells the story of Christ’s life. (David Bern/TTB file photo)

One of the holiday season’s most beloved and soul-moving stories about the life of Christ will be performed in Grantsville this weekend.

More than 100 vocalists and musicians with the Tooele Community Chorus and Orchestra will perform Handel’s “Messiah” in the Grantsville High School’s auditorium. It begins at 7:30 p.m. and is free to the public.

This will be the 32nd local performance of the oratorio, and Betta Nash, president of the chorus and orchestra, said this year’s presentation will feature 12 soloists, along with 54 musicians and 65 vocalists.

And like last year, the entire “Messiah” won’t be performed Sunday night, she said. The performance will include the creation through Christ’s birth — “the prophecy and the fulfillment of God’s plan,” she added.

Then around Easter next spring, the chorus and orchestra will return to perform the rest of “Messiah” with Christ’s death and resurrection, Nash said. It was decided to switch from a full to split performance last year to create more opportunity for solos, and make “Messiah” more family friendly.

Nash, who has been president of the chorus and orchestra for more than 20 years, said she “loves Messiah” and looks forward to the local performance every year.

“It’s so wonderful to hear all the people come together and create this glorious sound for a glorious purpose,” she said.

Pamela Dale, music conductor for the chorus and orchestra, said rehearsals began the second Sunday in October. All rehearsals are held Sunday evenings and the sound of this year’s performance will be more balanced thanks to extra tenors, she said.

Like Nash, she too has a deep love for “Messiah,” and not only because oratorios have been her favorite since being a member of the Mormon Tabernacle Choir.

“It’s spiritual and true,” she said. “It’s right out of the scriptures, and to be involved is such a wonderful opportunity.”

Dale said after Sunday’s performance, the chorus and orchestra takes about a month off and then starts rehearsals to “brush up” for the Easter performance. She said there was a good crowd at Easter last year.

Sunday’s performance will be conducted by Dale and Aaron Curry.

The performance is sponsored by The Church of Jesus Christ of Latter-day Saints, but the chorus and orchestra includes members of other faiths. “Messiah” was composed in 1741 by George Frideric Handel. GHS is located at 155 E. Cherry St.