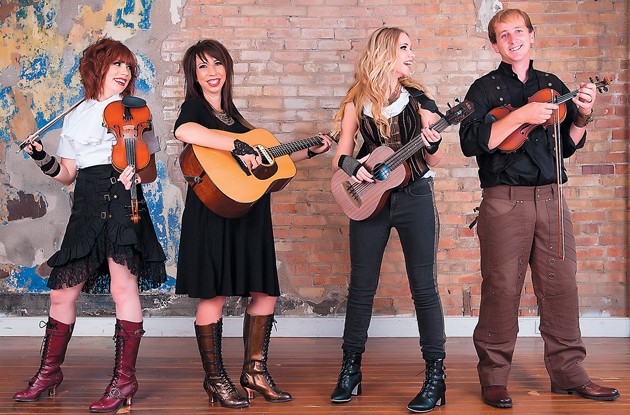 CrossStrung is scheduled to play Fridays on Vine. The band is a high-energy acoustic band playing genres from folk to pop, Celtic to country and bluegrass to gospel.

At first glance, the band’s award-winning lineup may not sound all that extraordinary —  after all, it’s not that terribly unusual to begin touring the world at 15 in the entertainment industry. It’s more unusual to encounter a five-piece bluegrass act comprised entirely of family.

Sheri Cluff, a mother of eight, got the band started first by learning piano and flute in her own childhood, and then by introducing three of her daughters to the fiddle, according to the band’s online bio.

Though “mom” still joins the band for various gigs, sisters Leah Cluff, Sarah Riggs and Emma Cluff now take center stage, singing in three-part harmony. Joining them is Dan Riggs, the young performer who toured internationally at age 15 with Clog America, and who by happy coincidence married into CrossStrung.

The sisters have their own lists of accolades as well. Leah Cluff has won state fiddling competitions and appeared at the national fiddle competition in 2011, and Sarah Riggs is a two-time Utah mandolin champion. Emma Cluff, the youngest, is the self-proclaimed family champion at the “Just Dance” video game, and is an accomplished musician, playing both electric bass and bass fiddle.

The Salt Lake City-based band has toured all over the nation in recent years, focusing on the bluegrass and Celtic genres, but also brings in elements of contemporary folk, country, swing and gospel music.

Fridays on Vine concerts begin each week at 7 p.m. in the Tooele City Park between Vine Street and the Pratt Aquatic Center. Admission is free to all, but patrons are encouraged to bring a lawn chair, as seating is limited.