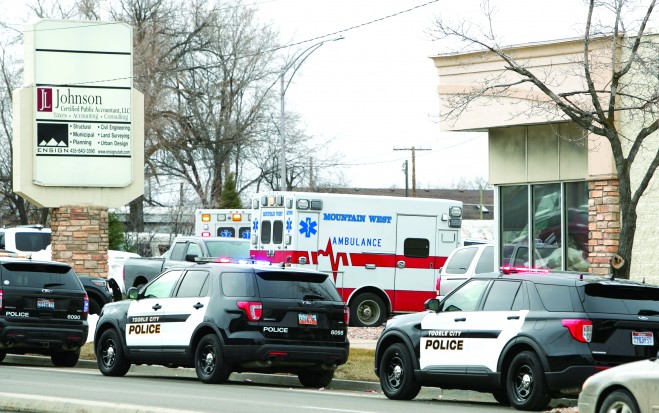 The driver and one other employee were also injured in the accident.

This is the first time I’ve ever done this,”  Shannon Bullock, daughter of Lance Moore, the driver of the van said. “I’m trying to put a scholarship together for students who want to become medical or first responders, because of how they helped my dad and the victim.”

Bullock isn’t sure how much she would like to attempt to raise for the scholarship, but she is working on putting together a raffle and will be selling tickets soon.

Moore wants to donate his motorcycle to the raffle.

“I have items already, like I have a few tattoos, piercings, honey from someone, someone who will donate hair extensions, and someone who will help with tumblers,” Bullock explained. “I’ve been reaching out to people to get things to raffle off. I have another friend who is making Mexican food.”

All donations, money for the Mexican food, and money for raffle tickets can be given through a Venmo @roseann-fund.  Bullock is accepting donations now and has raised around $275 so far.

“My dad put up his driver’s license, because this is killing him,” Bullock said. “This was a medical thing that he had no control over, but he is giving his license up and we are going to raffle that off and all of the proceeds from the motorcycle are going to go into the Roseann Fund on Venmo.”

The Davis family didn’t want any money donated directly to them, but they are excited for the opportunity to keep Roseann’s memory alive through the scholarship, according to Bullock.

“I’ve been talking to one of the family members and they’ve been kind enough to give me some information about Roseann,” Bullock said. “I’ve never met her and I don’t know her, but she was a giver to the community and her church. They didn’t want the money and they didn’t want us to sell the motorcycle, so I asked them if it would be okay if I tried to raise the money for a scholarship in honor of her.”

Along with everything else, Bullock is in the process of designing shirts and mugs to sell or give to those who donate.

If the scholarship is successful this year, Bullock plans to raise money again next year.

So far, everything has been done through the Tooele County 411 and Grantsville 411 group. Those interested in finding out more or keeping up with the raffle should search Bullock’s name in the Facebook groups.

Bullock plans to create a Facebook page related to the scholarship soon.

The cause of the accident was likely a seizure out of the driver’s control, but police are still investigating.

“We are looking into whether or not the driver had a seizure,” Cpl. Colbey Bently, public information officer at the Tooele City Police Department said. “We still have the investigation ahead of us … We aren’t officially ruling anything out, especially because there was a fatality involved … Unfortunately, it really is a long investigation.”

Bentley said the investigation may take a few weeks.

The incident occurred at 11:23 a.m. on Jan. 16, when a minivan headed northbound — but going the wrong way through southbound lanes — on Main Street in Tooele City drove over the curb at 169 N. Main Street driving through the front of the Ensign Engineering office.

The vehicle was stopped by a concrete wall.  A female employee of Ensign engineering, 51-year-old Roseann Davis from Tooele City was pinned under the van. She died on the scene after resuscitation attempts were unsuccessful.

A male employee was also injured by the vehicle. The employee and the driver of the van were taken to a local hospital, Bentley said.

The Transcript Bulletin spoke to Davis’ husband after the accident. He talked about what a wonderful person his wife was.

“I just want everyone to know how grateful I am for Ensign and the people she worked for for taking such good care of her and for the medics and the emergency responders on the scene,” he said. “I also want the family and the gentleman who was in the accident to know our love and prayers are with them and that we hope that they are healing as well. We are really grateful for the rock that she [my wife] was to all of us in our lives.”