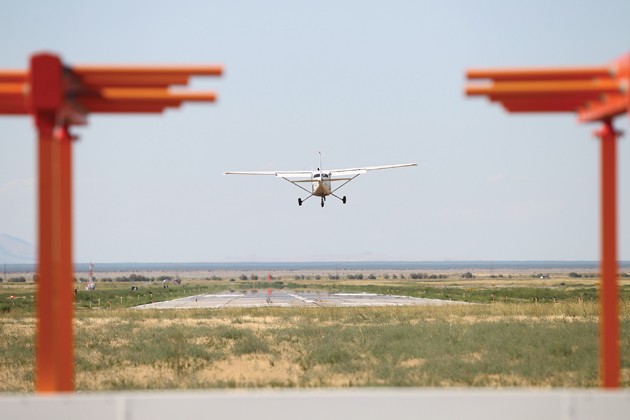 Cornerstone Aviation plane prepares to land and then take off in a touch and go exercise at the Erda Airport in August 2011.

A protracted 12-year-old battle between an Erda family and Salt Lake City over avigation easements near Tooele Valley Airport continued in a City Council work session on Friday.

At the meeting, Neil Kunz said rather than deal with the easements, his family would prefer to sell its property and homes to Salt Lake City, which owns the airport. He said the tight proximity to the airport makes their holdings incompatible with residential use.

“My father and I realized we just wanted the airport to buy us out,” Kunz said. “You need it. I don’t want to have a right of flight. These surfaces that are required are going to allow planes to be within 10 feet of my house and my mother’s house.”

Kunz said the instrument landing system installed in April 2008 allows planes to now land at the regional airport at all hours and has been awakened by planes flying nearby at 3 a.m.

The Kunz family’s lawyer, Robert Mansfield, called the city’s attempt to take property by eminent domain “an absolute abomination.” He said when the process began in March 2007, the late Dick Kunz was limited to only two minutes to speak when he requested the opportunity to make a presentation to the city.

Mansfield also contended the city has not made an offer to the landowners or done a valuation of the easements.

“Right now, that hasn’t been done,” he said. “No effort has been made to value the avigation easement that’s sought to be taken and never has.”

“No offer approximating the $434,000 was ever made to the Landowners to acquire an avigation easement over their property,” the documentation said. The total acreage affected by the easements is 12.21 acres, according to documents in the council’s package.

After the presentations by the Kunz family and Mansfield, the City Council entered a closed session that lasted about 45 minutes.

During the meeting on Friday, the City Council adopted a resolution that would authorize eminent domain proceedings for the airspace easements near Tooele Valley Airport, while also allowing the city to pursue the purchase of the Kunz family’s property if an agreement can be reached.