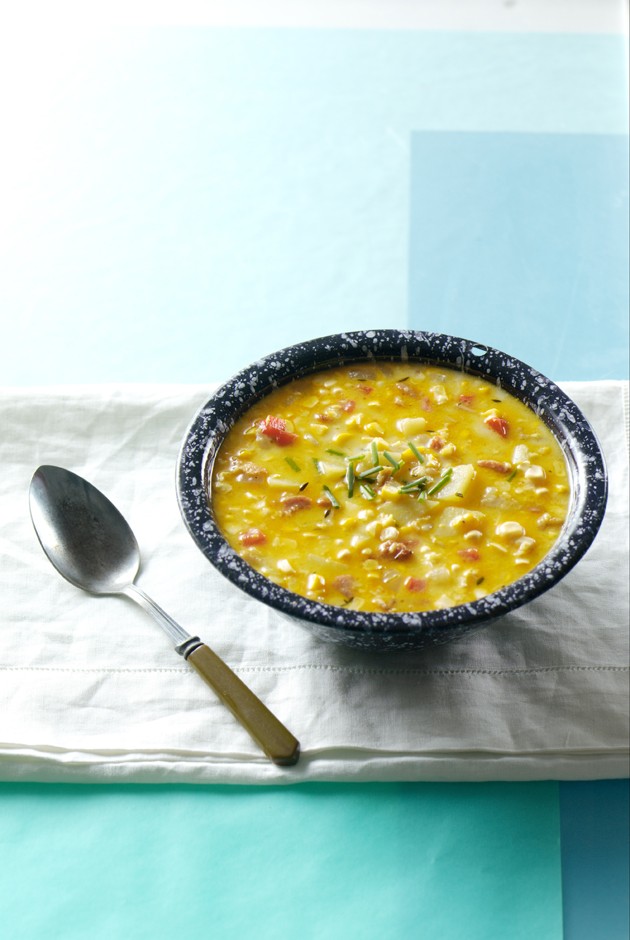 Before deciding that summer is not the right time for a pot of hot soup, forget for a moment the business of sauteing and simmering and read what Jasper White has to say about corn chowder. White is the chef and owner of the Summer Shack, a popular restaurant in Cambridge, Mass., specializing in New England seafood. Not surprisingly, there is always fish chowder on the menu, but when fresh corn is in season, corn chowder is a special.

“It’s the king of farmhouse chowders,” writes White. “The flavor of corn combines so naturally and beautifully with other chowder ingredients.”

Although we think of chowders as soups, early chowders were more like puddings. They were thick and stewy concoctions of mostly fish and vegetables. Indeed, there is not even a hint of the word “soup” in the history of the word “chowder.” Chowder comes from the English jowter, or “fishmonger” and has been linked to the French chaudron, or “large pot.”

White’s corn chowder is a version of a Shaker recipe and could almost be called summer in a bowl. It has ample amounts of fresh corn and potatoes, so that with each spoonful, you get a mouthful of vegetables. For a tad more thickening, White adds a cornstarch slurry; for brighter color, he stirs in a small amount of turmeric; and for interesting flavor he uses a little ground cumin. With sliced tomatoes and hunks of whole-grain bread, the chowder makes a perfect meal. Pay no attention to the thermometer!

1. Cut kernels off cobs and scrape off milky bits. You should have about 2 cups corn.

3. Cover and bring to a boil. Adjust heat and boil 10 minutes or until potatoes are tender. Stir in cornstarch mixture and cook until chowder is lightly thickened. Stir in cream. Garnish with chives or green onions. Serves 4.