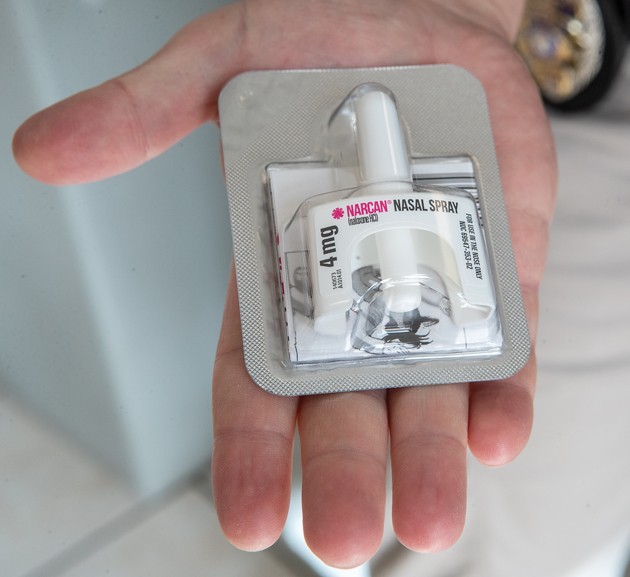 Narcan, a nasal form of nalaxone, is used by law enforcement officers to combat opioid overdose.

July 23, 2019
Fight against illicit drug use focuses on suppliers

And fight often occurs behind the scenes and out of public eye, law enforcement officials say ♦

Editor’s note: This is the first of a three-part series discussing illicit drug use in Tooele County, criminality linked to drugs and treatment and recovery in the county.

During a June 5 Tooele City Council meeting, a resident near the former Harris Elementary School spoke about her experience with two men using intravenous drugs in her front yard.

The speaker was one of several residents in the area of 100 East who spoke in opposition of a proposed rezone that would permit a drug rehabilitation facility in the former elementary school. Other residents described people wandering through the neighborhood, trespassing in their lawns or loitering, in what they said was an attempt to get drugs.

The public’s interaction with drug use disorder is often like that of the residents living near 100 East in Tooele, with people who are homeless or on the streets looking for drugs. When law enforcement makes an arrest, it’s rarely the people on the streets, said Detective Jay with the Tooele County Drug and Gang Task Force.

Jay’s real name will not be used in the article to protect his identity and ongoing undercover investigations.

“We’re really going after the source of supply and it’s never who you think it’s going to be,” Jay said. “It’s not the people you see on the streets.”

“And it does us no good as a law enforcement community to target the very bottom of the drug world,” Jay said. “… So a lot of times when we make an arrest and we seize whatever we’re going to seize, it’s never those people that the public sees. It’s never in the areas that the public thinks is the worst problem.”

“You always hear the neighbors say after a raid, ‘Wow, I lived next to them for years. I had no idea. I never would have known,’” said Grantsville City Police Sgt. Lydon Allred.

From a socioeconomic standpoint, there’s no one group that avoids substance use disorder, according to Tooele County law enforcement.

“I think we all could identify somebody in our family or something like that that’s been affected one way or another through use,” Wayman said. “Whether it be originally a pain medication where they became addicted to opioids, or they started with spice and now they’re addicted to marijuana or whatever it is … There’s no cultural or socioeconomic boundary that stops the use of it or prohibits it.”

While drug use may affect the full spectrum, it can be easier to mitigate some side effects of the disorder in wealthier families, which are rarely the face of the problem, Allred said.

“I think a lot of your wealthier people, whether it’s the family hiding it or embarrassed by it, they have different places to go,” he said. “I think that’s a big part of it. It’s what you see.”

The rise of opioid use in Utah and around the country has also played a role in changing the face of substance use disorder. In 2017, there were 456 overdose deaths in Utah related to opioids, a rate higher than the national average per 100,000 persons, according to the National Institute on Drug Abuse.

Of the deaths in 2017, 315 were connected to prescription opioid use, with 147 from heroin and 92 from synthetic opioids.

In 2017, Utah providers wrote 63.8 opioid prescriptions for every 100 persons, higher than the national average of 58.7 prescriptions, according to NIDA. Both the rate of prescriptions per 100 persons and overdose deaths have declined from peaks in 2008 and 2014, respectively.

The connection to prescription drugs is one factor in getting the average person connected to opioids, Allred said.

“Obviously if I walked up to someone and said, ‘Hey, try meth,’ they’re going to laugh at me,” he said. “But if a doctor says, ‘Hey, take this pill,’ you know, it’s doctor prescribed. It’s OK.”

Everyone knows someone who went in for surgery and were prescribed some kind of pain medication, Jay said. For many opioid users, it can eventually lead to heroin and other drugs.

“It’s one, too, that I think is harder to track because you’ll get a lot of people that are addicted doing their normal day, taking pills or whatever, and they’re able to hide that addiction a little better,” Allred said.

A kilogram of heroin goes for about $28,000 on the street right now, Jay said. With more heroin being laced with fentanyl and carfentanil, however, the amount needed to get high is minute, Wayman said.

A side effect of the rise in opioid use is law enforcement officers in every agency in the county are now carrying naloxone, or the nasal spray alternative, Narcan. An opioid bonds to receptors in the brain, easing pain but slowing signals to the rest of the body. Most overdose deaths come when the victim’s breathing slows and eventually stops.

Naloxone works to knock the opioid from the receptors in the brain, essentially ending the high and sending the overdose victim into immediate withdrawal, which can be incredibly painful.

“When it’s given to them and they become coherent, they’re generally not overly happy,” he said. “… They don’t like the fact they were just given Narcan even though it just saved their life because it’s blocking those receptors in their brain and they know they’re going to get dope sick.”

While opioids, including prescription drugs and heroin, are among the most deadly drugs in the county, problems persist with methamphetamine, cocaine and other controlled substances. Much of the work to combat illicit drugs in Tooele County happens behind the scenes, with ongoing investigations out of the public eye, Wayman said.

“The public does seem to get the idea there’s nothing going on in this fight against the problems that invade our community with the drugs and the property crimes,” he said. “While we can’t go into a lot of detail about the effort that is going on, there is a concerted effort to combat it.”

Despite the challenges facing the county from opioids and other drugs, the community doesn’t always want to talk about what’s really happening, said Allred. The public would rather just know law enforcement is handling it, which can be tough with the swing toward decriminalization, he said.

There can be blowback on local law enforcement on Facebook or other social media platforms for their handling of the drugs in the county. Another group paying attention to social media are drug dealers, who watch closely and if they feel the police are sniffing around, leads can turn cold, Wayman said.

‘We don’t disclose a lot of information for the sake of the investigation, to preserve the integrity of it,” he said.

The county’s drug and gang task force gets tips all the time from people about someone who is possibly selling drugs or otherwise involved in the drug trade, according to Jay. What the public doesn’t always understand, he said, is investigations, which take time to do correctly, are required.