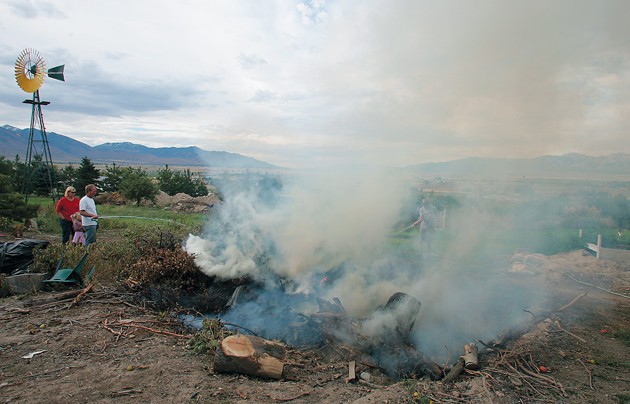 Controlled fires like the Bates Canyon one shown in this file photo will require a free permit, or the penalty from the state can be $299.

There have already been at least six wildfires caused by humans in the county this year, according to fire officials.

Ryan Willden, public information officer for the North Tooele County Fire District, said they have received at least a half dozen calls related to illegal burns. Under the terms of the free permit, residents must provide safeguards to contain the fire and abide by air quality standards.

“Obviously the concern we have is the conditions and ensuring people do it appropriately,” Willden said.

The state Division of Air Quality regulates burning in the state, which is restricted to two seasons in Tooele County. Residents can burn yard waste and other plant debris between March 30 and May 30, then again between Sept. 15 and Oct. 30.

Jay Morris, minor source compliance section manager for DAQ, said permits are always available at the same time every year. A permit is good for a two- to three-day window, so Morris said the first permits should be available in the days leading up to March 30.

To reduce the risk of a fire spreading, the state has detailed parameters to govern controlled burns. All materials in the fire must be thoroughly dry and no trash, including tires and oil, can be burned, according to state guidelines.

On the day of the burn, the clearing index must be 500 or greater. The clearing index measures air quality and smoke dispersal; a score of 1,000 or higher is considered excellent ventilation and scores below 500 indicate poor conditions for burning.

The current clearing index for the region can be found on the DAQ or National Weather Service websites. On Monday, all of Tooele County was above a score of 1,000 on the clearing index, conditions that would allow burning if the permit season had begun.

When completing the burn permit, applicants must consider the location of the fire and its potential impact of smoke and flames. The state also recommends considering all alternatives to burning the material and must have some form of fire suppression available.

Willden said in residential areas like Stansbury Park, burn permits are not available for burning yard waste or trash. Only recreational fires in an approved fire pit are allowed, he said.

Morris said the number of complaints related to illegal burns has been higher than usual but DAQ has opted to educate the public instead of levying fines so far this year. He said he attributes the uptick in illegal burn violations in part to the warm weather.

“I think it’s an effect of the mild winter,” he said.

According to Morris, the state penalty for burning without a permit is $299.

“The fines can be fairly expensive,” Willden said. “The process to fill out a burn permit is free.”

Anyone with questions about burn permits can contact the North Tooele County Fire District, Willden said. Administrative staff is on hand to answer questions between 8 a.m. and 5 p.m. and can be reached at 435-882-6730.