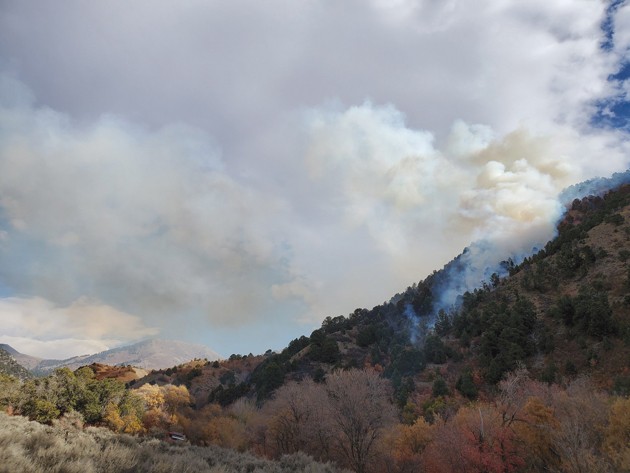 Smoke rises from the Soldier Canyon fire south of Stockton on Oct. 27.

Firefighters dispatched on Saturday to a fire in Soldier Canyon outside of Stockton found a body at the scene.

Tooele area firefighters were dispatched to Solider Canyon on report of a fire at approximately 12:35 p.m. on Saturday, according to a press release by the Tooele County Sheriff’s Office.

Upon arrival, firefighters located a deceased male on the west edge of the fire. Local officials have ruled the fire a homicide.

Sheriff’s Deputies responded to the scene to investigate the dead body, but they had to wait until the fire in the immediate area was contained enough to safely investigate, officials said.

After containing part of the fire and processing the scene, investigators determined the death was a homicide.

Officials said that the relationship between the dead body and the fire are still under investigation.

The body was sent to the State Medical Examiner’s Office.

The identity of the victim has not been released pending positive identification and notification to his family.

A late 90s Honda Accord, white in color, was abandoned near the scene, according to the press release.

The fire burned 32.5 acres of land in Soldier Canyon, according to Dan Walton, county fire warden.

“We are still working to extinguish it,” he said. “Smoke could still be visible.”

Firefighters from Stockton, Rush Valley, Tooele Army Depot, The Bureau of Land Management, and the Utah division of Forestry and State Lands have been working to put out the fire.

No structures were damaged because of the fire.

Officials said that due to the fire Soldier Canyon had to be evacuated.

The Tooele County Sheriff’s Office is asking any hunters, campers, or recreationalists that were in Soldier Canyon on Saturday to please call Detective Light at 435-277-4212.