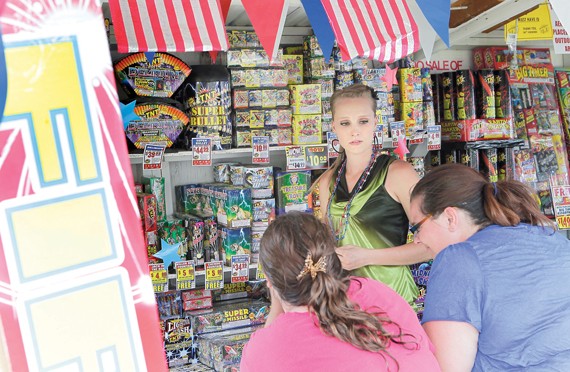 Between the soaring temperatures, the holiday falling in the middle of the week, extreme fire danger and a fireworks ban on all areas of the county except the inner areas of Grantsville and Tooele, business was not good for fireworks stands.

Steve Laird, who managed the Olympus Fireworks stand at HeritageWest Credit Union in Tooele, said he estimates his sales for this Independence Day chalked up to about 65 percent of last year’s for the same time period. Last year’s sales, though, were somewhat higher than normal because the holiday was on a Monday, giving people a three-day weekend during which to celebrate, he said.

Although there were still some areas where fireworks could be freely lit, Laird said the bans disrupted the culture of lighting fireworks.

“People like doing fireworks in front of the house. If the city council makes them go to a park or mapped-out area, they don’t always like to go,” he said.

Sales within Soelberg’s Market in Grantsville were also low, despite being in an area where fireworks are allowed. Mardee Clayton, manager of guest services, said a quick look at the fireworks shelves after the holiday appears much the same as when the fireworks were first displayed.

“Just looking at our display, I don’t think we’ve done very well,” she said. “We’re happy. With the restrictions it just means the people who aren’t supposed to b lighting them off aren’t buying them.”

For the first fireworks stand in Stansbury Park, though, the ban made a fledgling venture very difficult, said Andy Prescott, who volunteered at the TNT stand in the Soelberg’s Market parking lot on Tuesday.

“With all the restrictions and the dry weather, it’s been super tough,” Prescott said.

That stand was one of three in the county raising money to help TC United soccer club fund its tournaments and travel for competitions. Casey Walker, who organized the effort, said the lackluster sales this year in Stansbury were just part of the nature of the business.

“The sales were drastically lower. I think it has something to do with the ban,” Walker said. “It’s a learning curve. All business is taking risk.”

Dark clouds bringing a little rain this morning broke the month-long dry spell. Laird said the moisture, while welcome, would likely have boosted sales if it had come before the holiday.

“It’s about four days too late,” he said.

For Isaac Alvirez, running a Black Cat stand in the Winger’s parking lot in Tooele, although sales have not been good so far this season, the rain could still boost sales.

“It’s definitely a little slower than in years past but we still have fun,” he said. “Maybe if this rain keeps up some places will lift their bans.”