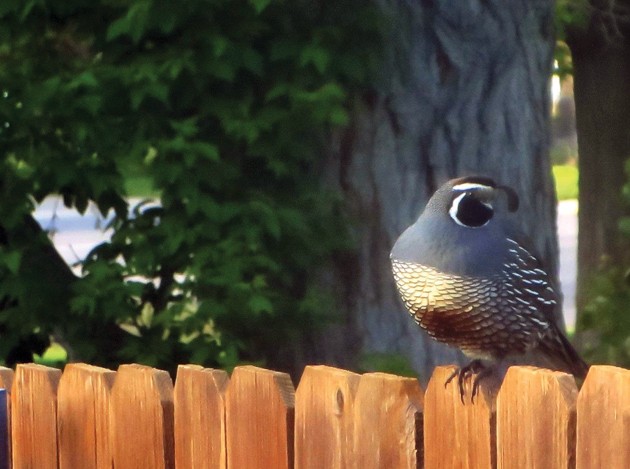 A male California quail perches on a yard fence.

Fort Douglas, originally known as Camp Douglas, was a small military post located three miles east of Salt Lake City. It was established in 1862 for the purpose of protecting the mail route and telegraph lines along the Central Overland Route. Soon after being established, General Gibbon was the first to introduce 14 pairs of California quail in 1869, which eventually encouraged more introductions in Salt Lake City and other neighboring areas. Today, quail are now a common sight and a year-round inhabitant, abundant in various parts in Utah and other southwestern states.

With an underwhelming physique, the California quail, despite its pudgy build, can run up to speeds of 12 mph when necessary. They are also capable of flying 38-58 mph for short distances or in bursts. California quail mostly dwell on the ground and are regularly seen running in groups about public places. However, they prefer to inhabit brush lands for more hiding opportunities from predators, while choosing to nest near foliage or tall, grassy areas.

Because of their variety of diet, including seeds, grains, berries, clovers, flowers, acorns, and other plants, California quail are not as dependent on water even when living in arid environments. They can receive their hydration through ingested plants and the insects they feed on, but if conditions go too long in the heat, they will seek drinking water to sustain them.

Once mated and paired, the female builds a nest by scraping a narrow area in the ground, lining it with grass and stems. Usually placed in tall weeds, nest destinations can vary from underneath bushes, near rocks, or the base of trees or shrubs. They can lay from 12 to 16 eggs, which are cream-colored and speckled brown. Some nests have been known to contain over 28 eggs, which is due to a parasitic behavior between the females, where they will lay eggs in another’s nest. This is known as “egg-dumping.”

After incubating for three weeks, quail chicks will rapidly adapt to running and following their parents just hours after hatching. Despite their speediness however, choice of concealing habitat, and two watchful parents, quail chicks are vulnerable to multiple predators and have a 50 percent mortality rate. California quails will often increase their offspring’s odds by conjoining with other rearing parents. The numbers of grouped families of quail can consist of more than 40, enabling all the adults to look after the entire group of chicks. Maturing quail gain most of their independency within three to four weeks of hatching, and will begin breeding at 10 months of age.