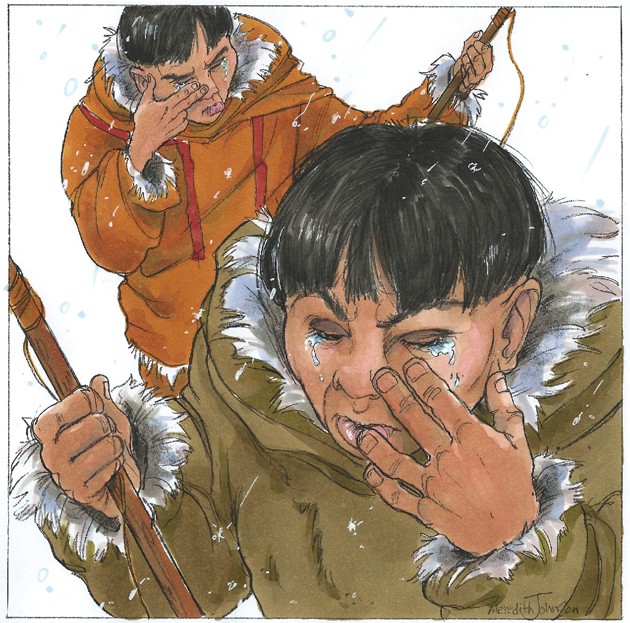 Long, long ago, two Inuit boys set off in their canoes to hunt for seals. They were seasoned hunters, and they promised their people they would bring home plenty of meat.

On they paddled, and soon they saw a group of seals gathered together on an islet near the shore.

“Look at that!” the older boy said. “Today is our lucky day.”

The other nodded. “Yes, we’ll celebrate when we get home.

They began to imagine their mothers, fathers, sisters and brothers celebrating their prowess with the rest of the villagers. They were proud boys, and they cared deeply for their people, so they wanted to make sure that the first feast of fall would be the finest feast of all.

They began to paddle as quietly as they could toward the shore. They were careful not to let their paddles splash the water. They glided along, moving as slowly and as stealthily as they could.

As they came closer, they noticed the seals were beginning to grow restless. A few splashed into the water, and others began to shudder awake. The boys slowed their canoes. They were very close to the shore now.

“Don’t wake the others,” they whispered.

But as they moved near, the seals began to slip, one by one, into the water.

“Look,” the younger boy whispered, “we’re losing them. We have to hurry.”

When the sleeping seals heard the boys’ voices, they jerked awake quickly, splashing back into the water, diving deep to swim out of harm’s way.

“Our feast is escaping!” the older boy hissed, growing frantic.

That’s when they spotted a seal that had been at the back of the group. It was a fat creature, fast asleep, unmoving. Clearly it was enjoying a deep, deep sleep and wasn’t aware of the danger.

The boys smiled at each other. There was their catch! They imagined the joy on their mothers’ faces, the pride in their fathers’ eyes. They imagined how full their bellies would be for weeks and months to come.

The boys quietly paddled the canoe onto land, slipped out and crept toward that last lazy seal. The creature did not appear to notice them.

But just when the boys were within a few feet of the seal, it suddenly awoke and sprang away, splashing into the water. The boys stood up and raced back to their canoe, but as they ran, their hearts were filled with the strangest stew of emotions. They had feelings they’d never experienced, thoughts that were so strange.

They saw the seal swimming beneath the surface, hurrying to catch up to the other seals. While they understood how relieved the seal must have felt to escape and rejoin his herd, the boys couldn’t help but feel great disappointment. Now they would not be able to feed their families and the other villagers.

Before they knew what was happening, the boys felt water beginning to drip down their faces, water streaming from their eyes.

They reached up and touched the drops of water. “What is this?” one of them asked.

The other touched the water, tasted it. It tasted like the ocean — salty and strange.

Just at that moment, both boys heard a strange sound coming from their throats. This sound seemed to rise from their chests.

“What is this?” the younger one asked. “What’s wrong with us?”

The older boy shook his head. He did not understand. The seal had escaped their knives and turned them into fools. Now they could not imagine what was happening.

They paddled home as fast as they could, and there they told the story to their fathers. They spoke of the look in the seal’s eyes and how the animal had escaped to safety. They told the men of that strange feeling that had overcome them, as if their bodies were filled with the ocean, bursting to escape.

Their fathers went to see the elders, and when the elders heard the story, they nodded and smiled. The elders understood: This was a gift to the young boys.

This was the gift of tears.