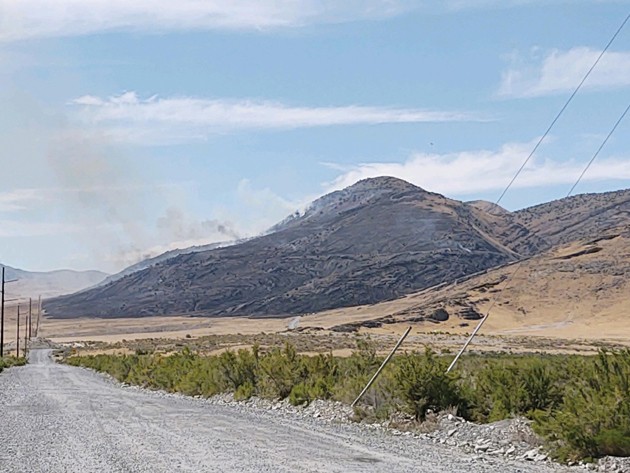 The Poverty Point Fire started at 2:10 p.m. on Saturday. It consumed 308 acres on the south end of the Lakeside Mountains.

The “Highway 138” fire started Thursday at 2:45 p.m. between SR-138 and Erda Way. The fire was caused by an individual grinding metal in an area of dry vegetation, according to reports.

The fire spread to 9.43 acres before firefighters had it under control. Numerous homes and buildings were threatened. The fire burned one vehicle and one outbuilding.

The “Sandbar” fire started about 15 minutes after the Erda fire. This blaze was located between the county landfill and Stockton sandbar and charred 11.7 acres. Reports label the fire as intentionally set and three individuals were detained at the scene. Officials charged one individual with arson. There was no damage to infrastructure. Stockton Fire Department responded with two engines. Also responding were the Vernon Fire Department, Tooele Army Depot Fire Deparment. Other resources included a BLM helicopter, two dozers from the landfill and air attack from a platform.

The “Median” fire started Saturday at 2:30 p.m. in the median strip on I-80 at mile-marker 54 and spread to 23.4 acres. Investigators determined the fire was human caused and is under investigation. Bureau of Land Management crews responded and multiple law enforcement agencies helped with traffic control.

The “Poverty Point” fire started at 2:10 p.m. Saturday and consumed 308 acres on the south end of Lakeside Mountains. The blaze was caused by an individual discharging a firearm in an area of dry vegetation. The Grantsville Fire Department responded with two engines and one water tender,  North Tooele Fire Department brought two engines. BLM crews were out in force with four engines, one water tender, one helicopter, four single engine air tankers and one air attack platform.

The fifth fire in three days started at 4:10 p.m. Saturday at 5 Mile Pass.

A report indicates the fire started when a gas-powered generator overheated and caught fire. The fire spread to 4.3 acres with no significant damage. Three individuals had to be evaluated for smoke inhalation.