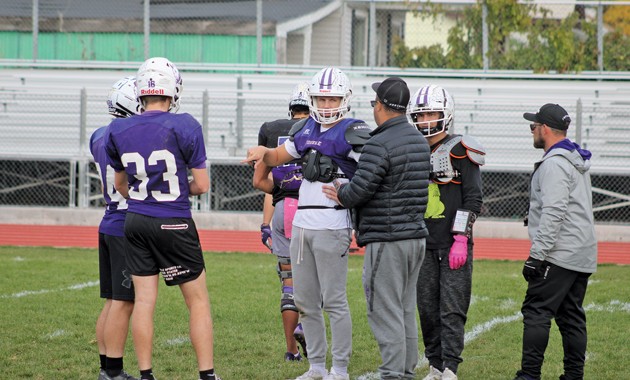 Heading into his first year at the helm of Tooele High School’s football program, coach BJ Hunter will be working with a relatively inexperienced team. The younger players will lean on the  juniors and seniors to help the group grow together.

Of those juniors and seniors, Hunter highlighted five starters who will be integral to this year’s squad.

Hunter said Larrat will be counted upon to produce on both sides of the ball, defensively and offensively. A versatile player who can fill multiple positions, Larrat’s 6-foot frame and leadership will help contribute to the Buffaloes success during the season.

As the team’s sole senior lineman this season, the 5-foot-10 McQuiddy will be expected to be the anchor of the offensive line as well as on defense. Hunter said McQuiddy is one of two returning starters from last year’s team.

Hunter anticipates Rydalch to see a lot of action this season. Last year, he averaged 3.7 rushing yards in the three games he appeared in.

The second of the two returning starters from last season’s roster, Hunter expects the 5-foot-11 Thrall to anchor the defense up front and also contribute as running back on the offensive end of the ball.

At 5-foot-9, Valencia will be the go-to player for running the ball on offense. Having started only one game last season, Hunter will give Valencia an elevated role and also make him a key piece of the secondary defense.

As a new coach, Hunter acknowledges that the season will be a learning experience for him as much as it will be for the players. And with his young roster serving as a sort of clean slate, the Buffaloes will have the unique opportunity to build itself from the bottom up.

“We’re focusing on ourselves being disciplined and being the best version of ourselves to help the team be consistent,” Hunter said.